According to Ethnologue,[5] it is the second most widely spoken Bantu language after Shona. Like many other Bantu languages, it is written using the Latin alphabet.

Zulu migrant populations have taken it to adjacent regions, especially to Zimbabwe, where Zulu is called (Northern) Ndebele.

Xhosa, the predominant language in the Eastern Cape, is often considered mutually intelligible with Zulu.[6]

The Zulu, like Xhosa and other Nguni people, have lived in South Africa for a long time. The Zulu language possesses several click sounds typical of Southern African languages. These click sounds are not found in the rest of Africa. The Nguni people have lived together with other Southern tribes like the San and Khoi.

Zulu, like most indigenous Southern African languages, was not a written language until contact with missionaries from Europe, who documented the language using the Latin script. The first grammar book of the Zulu language was published in Norway in 1850 by the Norwegian missionary Hans Schreuder.[7] The first written document in Zulu was a Bible translation that appeared in 1883. In 1901, John Dube (1871–1946), a Zulu from Natal, created the Ohlange Institute, the first native educational institution in South Africa. He was also the author of Insila kaShaka, the first novel written in Zulu (1930). Another pioneering Zulu writer was Reginald Dhlomo, author of several historical novels of the 19th-century leaders of the Zulu nation: U-Dingane (1936), U-Shaka (1937), U-Mpande (1938), U-Cetshwayo (1952) and U-Dinizulu (1968). Other notable contributors to Zulu literature include Benedict Wallet Vilakazi and, more recently, Oswald Mbuyiseni Mtshali.

The written form of Zulu was controlled by the Zulu Language Board of KwaZulu-Natal. This board has now been disbanded and superseded by the Pan South African Language Board[8] which promotes the use of all eleven official languages of South Africa. 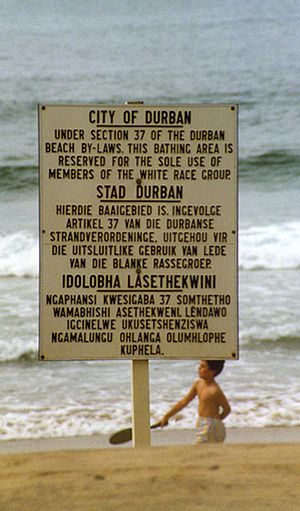 English, Dutch and later Afrikaans had been the only official languages used by all South African governments before 1994. However, in the Kwazulu bantustan the Zulu language was widely used. All education in the country at the high-school level was in English or Afrikaans. Since the demise of apartheid in 1994, Zulu has been enjoying a marked revival. Zulu-language television was introduced by the SABC in the early 1980s and it broadcasts news and many shows in Zulu. Zulu radio is very popular and newspapers such as isoLezwe,[9] Ilanga[10] and UmAfrika in the Zulu language are available, mainly available in Kwazulu-Natal province and in Johannesburg. In January 2005 the first full-length feature film in Zulu, Yesterday, was nominated for an Oscar.

South African matriculation requirements no longer specify which South African language needs to be taken as a second language, and some people have made the switch to learning Zulu. However people taking Zulu at high-school level overwhelmingly take it as a first language: according to statistics, Afrikaans is still over 30 times more popular than Zulu as a second language. The mutual intelligibility of many Nguni languages has increased the likelihood of Zulu becoming the lingua franca of the eastern half of the country, although the political dominance of Xhosa-speaking people on national level militates against this.[citation needed] (The predominant language in the Western Cape and Northern Cape is Afrikaans – see the map below.)

In the 1994 film The Lion King, in the "Circle of Life" song, the phrases Ingonyama nengw' enamabala (English: A lion and a leopard come to this open place), Nants ingonyama baghiti Baba (English: Here comes a lion, Father) and Siyonqoba (English: We will conquer) were used. In some movie songs, like "This Land", the voice says Busa leli zwe bo (Rule this land) and Busa ngothando bo (Rule with love) were used too.

The song Siyahamba is a South African hymn originally written in the Zulu language that became popular in North American churches in the 1990s.

Standard Zulu as it is taught in schools, also called "deep Zulu" (isiZulu esijulile), differs in various respects from the language spoken by people living in cities (urban Zulu, isiZulu sasedolobheni). Standard Zulu tends to be purist, using derivations from Zulu words for new concepts, whereas speakers of urban Zulu use loan words abundantly, mainly from English. For example:

This situation has led to problems in education because standard Zulu is often not understood by young people.[11]

/e/ and /o/ are pronounced [e] and [o] respectively when the following syllable contains an "i" or a "u", or when the vowel is word-final. They are [ɛ] and [ɔ] otherwise.

Vowel length is not contrastive, but vowels are allophonically lengthened in the stressed (penultimate) syllable.

The consonants marked with a diaeresis are depressor consonants, which affect the tone of their syllable. (See below.)

One of the most distinctive features of Zulu is the use of click consonants. This feature is shared with several other languages of Southern Africa, but is almost entirely confined to this region. There are three articulations of clicks in Zulu:

Each articulation covers five click consonants, with differences such as being voiced, aspirated, or nasalised, for a total of 15. The /ᶢǃʱ/ and /ᵑǃʱ/ series are depressor consonants, whereas /ǃ ǃʰ ᵑǃ/ are not. An additional series occurs in Xhosa, where clicks are used more frequently than in Zulu.

Like the great majority of other Bantu and African languages, Zulu is tonal. It is conventionally written without any indication of tone, although tone is distinctive in Zulu. For example, the words for priest and teacher are both spelled umfundisi, but they are pronounced with different tones.

Zulu syllables may have high, low, or falling tones. However, low tone is the default, and is over-ridden by neighbouring high tones, so it is common to describe low-tone syllables as having no inherent tone, with the two phonemic tones, high and falling,[dubious – discuss] appearing on only certain syllables, rather like stress in English. The falling tone is actually a sequence of high–low, and only occurs on long vowels.[dubious – discuss] Like other Bantu languages, Zulu has word tone, where tone patterns are largely independent of the number of syllables in a word. Zulu nouns have four principal tone patterns, while verbs have two.

For example, the English word 'spoon' was borrowed into Zulu as isipunu. The initial 's' was reanalyzed as the singular prefix isi-, which has a high tone. The English stress on the 'oo' vowel was interpreted as a high tone, as normally happens with English loans. Thus the Zulu word isipunu is phonemically /ísipúnu/, and phonetically [ísípʼúːnù] (high-tone spread to si, and low tone on the unmarked final syllable). The plural prefix for isi- nouns, however, is izi-, and Zulu z is a depressor consonant. Thus the plural /ízipúnu/ 'spoons' is pronounced [ízì̤pʼúːnù], with no tone assimilation. (In both cases, the high tone of pu is slightly lower than the tone of i, due to tonic downdrift. The penultimate syllable is also lengthened, as is normal in Zulu.)

Some of the main grammatical features of Zulu are:

All the strong people of the farm are felling (trees).

Here, the various agreements that qualify the word 'abantu' (people) can be seen in effect.

Suffixes are also put into common use to show the causative or reciprocal forms of a verb stem.

The following is a list of phrases that can be used when visiting a region where the primary language is Zulu.

(From the preamble to the South African Constitution)

We, the people of South Africa, Recognize the injustices of our past; Honor those who suffered for justice and freedom in our land; Respect those who have worked to build and develop our country; and Believe that South Africa belongs to all who live in it, united in our diversity.

Zulu place names usually occur in their locative form, which combines what would in English be separate prepositions with the name concerned. This is usually achieved by simply replacing the i- prefix with an e- prefix (for example, 'eGoli' translates literally as 'to/at/in/from Johannesburg' when iGoli is simply Johannesburg), but changes in the name can also occur (see Durban below). The locatives are given in brackets.

Morphology of the root -Zulu

The root word Zulu can be combined with a number of prefixes to create other words. Here is a table showing a number of words constructed from the roots – Zulu and ntu (the root for person/s; people).

Some prefer to call Zulu isiZulu in English as per the Zulu name for the language.

South African English has absorbed many words from the Zulu language. Others, such as the names of local animals (impala and mamba are both Zulu names) have made their way into standard English. A few examples of Zulu words used in South African English: