Tsereteli was born in Tbilisi and graduated from the Tbilisi State Academy of Arts, but soon relocated to Moscow. Among his works from the Soviet period was a resort for children in Sochi, completed in 1986. His wife was Princess Andronikashvili, from a noble Georgian family that claims patrilineal descent from Byzantine Emperor Andronikos I Komnenos.

Although much of his career was dogged by controversy, Tsereteli came to befriend Moscow's mayor Yuri Luzhkov, who secured some important commissions for him, including the reconstruction of the Cathedral of Christ the Savior, the Manege Square ensemble and the War Memorial Complex on Poklonnaya Gora. Luzhkov also allowed him to occupy an old mansion in downtown Moscow, which now houses the Zurab Tsereteli Gallery and where his life-size statue of Vladimir Putin is on display.

He is acquainted with Eunice Kennedy Shriver through the Special Olympics. He designed and installed a monument (called Happiness to the Children of the World) on the campus of SUNY Brockport commemorating the 1979 Special Olympics and the International Year of the Child.[1] 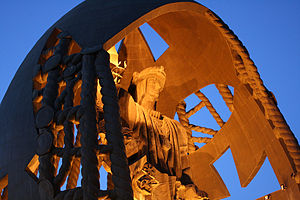 "The Birth of a New Man" in Seville.

As a reflection of his controversial reputation, a satiric short story describing Tsereteli as an alien installing a beacon through his various sculptures was published by Boris Akunin in his anthology Fairy Tales for Idiots (Russian: Сказки для идиотов, Skazki dlya idiotov). The alien's name is given as Yagkfi Yeyukuyeudsh (Russian: Ягкфи Еыукуеудш), a seemingly gibberish-like combination which actually spells out "Zurab Tsereteli" when typed on a Latin QWERTY keyboard by hitting the keys where the corresponding Russian characters would be located.

Tsereteli's works, though often welcomed by the authorities, tend to become objects of strong public criticism. His sculptures are often blamed and mocked for being incongruously pompous and out of proportion.[8]