From Infogalactic: the planetary knowledge core
Jump to: navigation, search
For other places with the same name, see Zwolle (disambiguation). 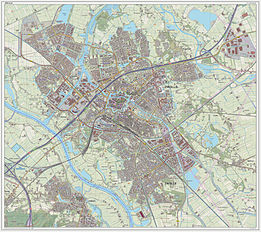 listen)) is a municipality and the capital city of the province of Overijssel, Netherlands. It has a population around 125,000.

Archaeological findings indicate that the area surrounding Zwolle has been inhabited for a long time. A woodhenge that was found in the Zwolle-Zuid suburb in 1993 was dated to the Bronze Age period.[6][7] During the Roman era, the area was inhabited by Salian Franks.

The modern city was founded around 800 A.D. by Frisian merchants and troops of Charlemagne.[8] The name Zwolle is derived from the word Suolle, which means "hill" (cf. the English cognate verb "to swell"). This refers to an incline in the landscape between the four rivers surrounding the city, IJssel, Vecht, Aa and Zwarte Water. The hill was the only piece of land that would remain dry during the frequent floodings of the rivers. Zwolle was established on that incline.

A document mentions the existence of a parish church dedicated to St Michael. That church, the Grote or Sint Michaëlskerk (big or Saint Michael Church), was renovated in the first half of the 15th century and exists to this day. The church contains a richly carved pulpit, the work of Adam Straes van Weilborch (about 1620), some good carving and an exquisite organ (1721).

On August 31, 1230, the bishop of Utrecht granted Zwolle city rights. Zwolle became a member of the Hanseatic league in 1294, and in 1361 joined the war between the Hanseatic League and Valdemar IV of Denmark. In the 1370 Treaty of Stralsund that ended the war, Zwolle was awarded a vitte, a trade colony, in Scania, then part of Denmark. Zwolle's golden age came in the 15th century. Between 1402 and 1450, the city's Gross Regional Product multiplied by about six.[9] 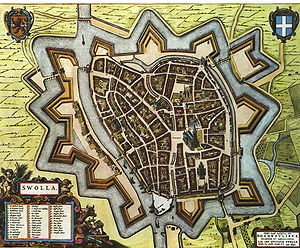 Zwolle was also, with Deventer, one of the centers of the Brethren of the Common Life, a monastic movement. Three miles from Zwolle, on a slight eminence called the Agnietenberg, (hill of St Agnes), once stood the Augustinian convent in which Thomas à Kempis spent the greatest part of his life and died (in 1471).[11]

At least as early as 1911, Zwolle had a considerable trade by river, a large fish market, and the most important cattle market in the Netherlands after Rotterdam. The more important industries comprised cotton manufactures, iron works, boat-building, dyeing and bleaching, tanning, rope-making, and salt-making.[11] 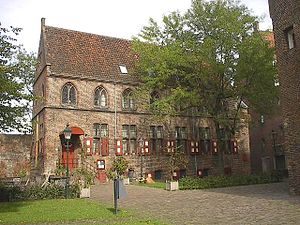 In World War II, Zwolle was single-handedly liberated from the Germans by Canadian soldier Léo Major. He was made an honorary citizen of Zwolle in 2005 and a street is named for him.

In 2004, Zwolle's De Librije restaurant was honored with 3 stars by Michelin Guide; as of 2007, with the demotion of Parkheuvel from 3 to 1 star, it is one of only two restaurants so honored in the entire country.

Citizens of Zwolle are colloquially known as Blauwvingers (Bluefingers). This dates back to 1682, when the St Michael's church tower collapsed. The authorities were strapped for cash and saw no option but to sell the church bells to neighbouring city Kampen. To make sure that Kampen would not make too much profit from the deal, the local authorities asked a high price for the church bells. Kampen accepted, yet after the arrival of the bells it became clear, they were too damaged to be played. In revenge, Kampen paid in copper coins of four duiten (the equivalent of two-and-a-half cents). Zwolle distrusted Kampen and wanted to be sure they truly paid the entire price. After the rigorous counting of this vast amount of money, their fingers had turned blue from the copper.[12][13]

Besides the Grote or Sint Michaëlskerk (the latter which houses a majestic Baroque organ built by Arp Schnitger), there are several other historic monuments in Zwolle. The Roman Catholic Onze Lieve Vrouwe ten Hemelopneming-basilica (Our Lady Ascension) dates back to 1399. The church tower, called Peperbus (pepperbox), is one of the tallest and most famous church towers in the Netherlands. The modernized town hall was originally built in 1448.[11]

Mention should also be made of the Sassenpoort (one of the old city gates), the city walls, the Mosterdmakerstoren (mustard makers' tower)(the complex where local mustard used to be made), a guild-house (1571), the former provincial government offices, a Dominican monastery, and on the Melkmarkt, two museums; the Stedelijk Museum Zwolle of antiquities and natural history, and the Vrouwenhuis. Museum de Fundatie, the fine art museum of the province of Overijssel, is hosted in the former Justice Hall on Blijmarkt Square.

In the western part of the city, west of the railway station, there is a quarter of Art Nouveau buildings, concentrated mostly on Koningin Wilhelminastraat, Prinses Julianastraat, and Prins Hendrikstraat. These three-store living houses were built in 1900s by various Dutch architects. Eleven of the buildings are protected by the Dutch government (rijksmonumenten).

The Broerenkerk church was part of the Dominican monastery founded in 1465. The monastery was closed in 1580 and the monks were expelled. From 1640 until 1982 the church was used for Protestant services. After a restoration in 1983-1988 it has been used for cultural events and it is now a bookstore.[15][16]

Zwolle is home to several universities and colleges: 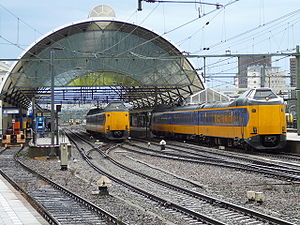 Zwolle is a hub in the national highway network, and gateway to northern Netherlands. This is reflected in the high traffic volumes in and around the city. The A28 serves Zwolle with 4 exits, and runs from Utrecht to Groningen. It is being widened to 8 lanes across the IJssel River and 6 lanes from Zwolle to Meppel in 2010 and 2011. The motorway initially opened between 1964 and 1970.[17] Another motorway, the A50, interchanges with A28 just west of the city, offering a route for southbound traffic to Apeldoorn and Eindhoven.

The N35 highway starts in Zwolle, where it forms the eastern section of the ring road of Zwolle, it runs as a non-motorway to Almelo and continues to Enschede as A35 motorway. The ringroad is mainly a 4-lane road, with numerous traffic lights. It forms a full ring, and also exists out of the N337 highway that runs to Deventer. Other sections of the ring road are not numbered. Parts of the ring road were widened to six lanes in 2010. Other numbered highways running from Zwolle are N331 to Hasselt, N758 to Nieuwleusen, N340 to Ommen and N764 to Kampen.

Due to nearby rivers, there are several major bridges in and around Zwolle. The most important bridge is the IJssel Bridge where the A28 motorway runs across. It was completed in 1970 and carries over 115,000 vehicles per day. Adjacent to this bridge is the older IJssel Bridge, which opened in 1930 and was destroyed twice during World War II. A third IJssel Bridge is the railway bridge (called Hanze boog) which carries the railway line from Zwolle to Amersfoort, and from 2012, to Lelystad. There are several bridges across the Zwarte Water River, including two 4-lane bridges, a 2-lane bridge, and a bus/bicycle bridge. There is also a bridge across the Vecht, which carries A28 motorway. Another local bridge is adjacent to this bridge. A third bridge carries rail traffic to Leeuwarden and Groningen. Numerous local bridges exist around the historic city center.

The rail connection with Amsterdam via Lelystad – the Hanzelijn – is operational since December 2012.

Zwolle is located on or near three rivers (Zwarte Water, Vecht, and IJssel), several canals (the now disused Willemsvaart, Nieuwe Vecht and Overijssels Kanaal and the modern Zwolle-IJssel Kanaal). There are some water-related industries in Zwolle, mainly in the Voorst industrial area.

Main article: List of twin towns and sister cities in the Netherlands

Zwolle is currently twinned with:

In the past, Zwolle had partnerships with: