Zygmunt Henryk Berling (27 April 1896 – 11 July 1980) was a Polish general and politician. He fought for the independence of Poland in the early 20th century. During Second World War he was sentenced to death in absentia for desertion from the Polish Army of General Władysław Anders. The verdict was overruled by the Polish government-in-exile. Later he became the commander of the 1st Polish Army, part of the Polish Army in the USSR and played an important role in the post-war Polish government.

Zygmunt Berling was born in Limanowa on 27 April 1896, (Some researchers think Berling to be from German or Swedish Calvinist roots. Berling himself gave Judaism as his religious affiliation in school surveys. -1). He joined the Polish Legions of Józef Piłsudski in 1914, serving in the 2nd and 4th Legions Infantry Regiment (Pułk Piechoty Legionów). Between the "oath crisis" of June 1917 and October 1918 he served in the Austro-Hungarian Army. At the end of the First World War he joined the reborn Polish Army, becoming the commander of an infantry company in the 4th Infantry Regiment. During the Polish-Soviet War he gained fame as an able commander during the Battle of Lwów, and received the Virtuti Militari medal for his leadership.

After the war he remained in the military and in 1923 he was promoted to major, first serving on staff of the 15th Infantry Division of V District Corps Command in Kraków. In 1930 he was promoted to lieutenant colonel and started his service as a commanding officer, first in the 6th Infantry Regiment and then in the 4th Infantry Regiment. Berling initially retired from active duty in June 1939 because of a messy divorce and conflicts with his superiors.[1] 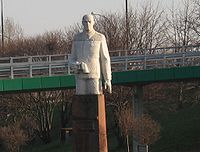 Berling did not participate in the defence against the German Wehrmacht during the invasion of Poland in 1939. After his home city of Vilnius was occupied by the Soviet Union under the terms dictated by the Molotov-Ribbentrop Pact, Berling, along with many other Polish officers, was arrested by the Soviet Union's secret police, the NKVD. Berling remained in prison until 1940, first in Starobielsk and later Moscow, but since he agreed to co-operate with the Soviets, he avoided execution by the NKVD in the Katyn Massacre.

After the Sikorski-Maisky Pact of 17 August 1941 Berling was released from prison and nominated to be the Chief of Staff of the recreated 5th Infantry Division, and later the commander of the temporary camp for Polish soldiers in Krasnowodsk. The growing tensions between the Polish government-in-exile of Raczkiewicz and Sikorski in London and Joseph Stalin eventually led to many of the Polish soldiers and over 20,000 Polish civilians in Soviet territory under General Władysław Anders (General Anders) leaving the Soviet Union and forming the 2nd Polish Corps in the Middle East, under British command. Eventually, the relations between the Polish government-in-exile and the Soviet Union were broken off after Germans publicized the findings on the Katyn Massacre.

During the Polish Army's evacuation led by General Anders, Berling deserted along with two other officers to join the Red Army. On 20 April 1943, Anders degraded all three and expelled them from the army. On 25 July 1943 the field court confirmed the expulsion and sentenced the deserters in absentia to death and loss of public rights for ever. The court's decision stated: "the accused deserted from the Polish Army, in Court's opinion in order to join the Soviet Army, ie. to serve the country which has as one of its goals the end of existence of the independent Polish state by means of incorporating its territory."[2] The sentence was vacated by General Kazimierz Sosnkowski, the Polish Army's Commander-in-Chief in London, because of political considerations.

On 1 August 1944, the underground Polish Home Army, being in contact with and loyal to the Polish government-in-exile in London, began the 63-day long Warsaw Uprising, in an attempt to free the city from the occupying German forces before the Red Army could secure the capital. With his own army stopped on the Vistula River and facing Warsaw itself, and without first consulting his Soviet superiors, Berling may have independently issued orders to engage the German enemy and to come to the aid of the Polish resistance. But it was a small landing without any tactical support from Berling or other Soviet units that could not make a difference in the situation of Warsaw. Yet this behaviour may have caused Berlings' dismissal from his post soon after.[3] He was transferred to the War Academy in Moscow, where he remained until returning to Poland in 1947 where he organized and directed the Academy of General Staff (Akademia Sztabu Generalnego). He retired in 1953.