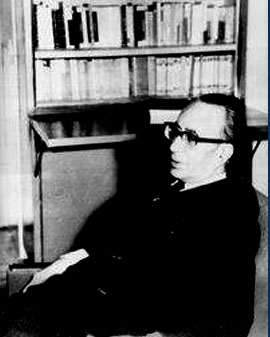 Ahmad Fardid (Persian: سید احمد فردید‎‎) (Born in 1909, Yazd – 16 August 1994, Tehran) was a prominent Iranian philosopher and an inspiring and dedicated professor of Tehran University. He is considered to be among the philosophical ideologues of the Islamic government of Iran which came to power in 1979. Fardid was under the influence of Martin Heidegger, the influential German philosopher.

Fardid studied philosophy at Sorbonne university and University of Heidelberg. The sparsity of Fardid’s written work has led to his recognition as an "oral philosopher". This was, to be sure a puzzling attribute. Although Fardid tried to justify his expository reluctance to the poverty and contamination of the language, (in the Heideggerian sense) some suspect his reticence stemmed from his paralyzing perfectionism. His predicament calls resemblance to Efimov, a character in Dostoyevsky's unfinished novel "Netochka Nezvanova" in which the protagonist, a violin performer, having had a brush with the sublime majesty of pure art abandons his musical instrument for good.

Fardid coined the concept of "Westoxication" which was then popularized by Jalal Al-e-Ahmad on his then widely known book Gharbzadegi, and after the Iranian Revolution of 1979, became among the core ideological teachings of the new Islamic government of Iran.

Fardid's turbulent intellect was absorbed in the enterprise of synthesizing (promisingly or otherwise) the results of his studies of Eastern civilizations with the Western philosophy, as interpreted by Heidegger. Fardid's project remains unfinished and fraught with shortcomings and errors. Nevertheless, it remains an enormously intriguing and valuable endeavor. Heidegger himself on several occasions (including in his encounters with DT Suzuki concerning "transmetaphysical thinking" and in his valedictory interview with Der Spiegel) optimistically alluded to the possibility of a convergence of Eastern and Western thought but he never explored the subject matter himself, citing a lack of knowledge and insight about the non-Western universe of discourse. Ahmad Fardid, from his corner, hoped to produce a blueprint for the endeavor, but he only succeeded in vaguely adumbrating certain contours of it. His influence is evident in the work of many philosophers in modern Iran even if that is left concealed in their biographies and writings due to the criticism that is generally directed at his thinking by intellectuals with liberal and leftist politics.

Ahmad Fardid has been widely denounced by prominent Iranian intellectuals such as Abdolkarim Soroush and Dariush Ashuri as a total fraud; and perhaps this is due to their own political commitments rather than being as such on purely philosophical grounds. Mahmoud Sadri, himself a student of Fardid in the seventies, has rejected such virulent ad hominem attacks on Fardid in an article for www.iranian.com. Fardid rejected Human Rights declaring it a Western notion, and an instance of "Westoxication". Fardid often instructed his disciples, many of whom later became among the ruling clique of the Islamic government of Iran, to disregard such "westoxicated" concepts as democracy, civil rights, and tolerance, and instead to return to their "authentic Oriental self". Fardid was also a conspiracy theorist and an avid anti-Semite.

Those who remember the little clownish figure of Fardid on TV (Beyond the West and the East), with his stern but funny gestures and incomprehensive phrases, would enjoy the debunking of the ‘depth’ of this cartoon figure. But when they reach the final pages, blood is everywhere! They will be touched by an apt comparison and contrast with Sadegh Hedayat, whose gentle countenance lies silently next to the cold, pale, sleeping figures of all those murdered writers in morgue; all the victims who saw through the Oriental spirituality and anti-modern postures. Reminiscent of the work of Aramesh Dustdar thirty years ago, here Mr. Ashouri points his finger at, and then stirs some, the swamp. Fardid is dead but little Fardids are all around us. And not just of religious stripe. They come in all varieties: secular, left, right, liberal …When will this cycle end?