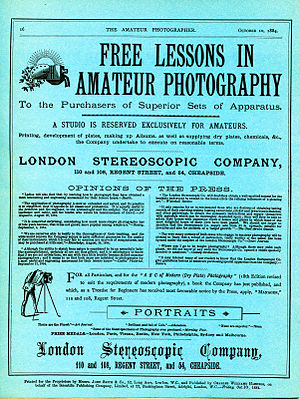 The Amateur_Photographer, Vol 1, No 1, rear cover

Amateur Photographer was first published on 10 October 1884, making it over 130 years old. It has established itself as the world's number one weekly photography magazine[citation needed]. Some of the most renowned photographers such as Alfred Stieglitz, Frank Meadow Sutcliffe, David Bailey and Bob Carlos Clarke have written for the magazine over the years. [2]

The Test Reports from past publications can be purchased online from TestReports. There are nearly 9,000 tests available; consisting of reviews of cameras, lenses and other equipment.

AP (as it is referred to) is usually based around the following items:

Amateur Photographer of the Year (APOY)

APOY is an annual competition run by Amateur Photographer, and is open to anyone that earns less than 10% of their yearly salary from photography.[3]

The entries are limited to one photograph per reader per month.

Each years competition is run on a monthly basis, with each month having a dedicated "theme" for the images to adhere to. The APOY judges than narrow the entries down to a short list of 50. From there, the final 'Top 30' are awarded points and published in the magazine; with the top three places being awarded prize donated by Canon UK. All 30 point scoring photographers are entered into the league table; which is edited after each round. After all ten rounds, the photographer with the highest score in the league table is crowned the Amateur Photographer Of the Year and wins £5,000 worth of Canon vouchers to be remdeamed against the purchase of personal photographic goods (defined as Canon Consumer Imaging Products).

More information can be found on the APOY page of the AP website. 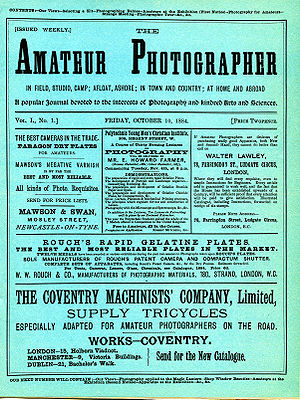