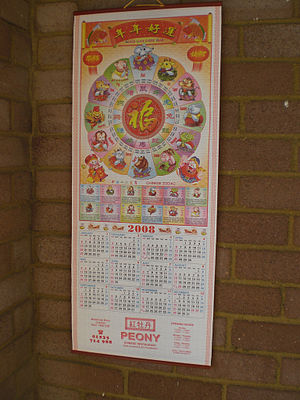 A combination calendar, with Gregorian system below and a Chinese zodiac chart above.

The Chinese calendar is a lunisolar calendar which arranges the year, month and day number upon the astronomical date. It is used for traditional activities in China and overseas Chinese communities. It determines the date for the Chinese traditional holidays, and instructs Chinese people in selecting the lucky day of a wedding or funeral, for opening a venture, or a relocation.

Several coding systems are used for some special circumstances in order to avoid ambiguity, such as continuous day or year count.

In the Chinese calendar, the days begin at midnight and end at the next midnight, but people tend to regard the days as beginning at dawn.

Currently, the time in days are scaled with hour-minute-second system.
In ancient China, the time is divided according to either the shí-kè and gēng-diǎn systems. There are 10 gēng or 12 shí, 60 dián or 100 kè, 6000 fēn in a day. For example:

Currently, the days are grouped into 7-day weeks and the weekdays are marked with the ordinal number except Sunday.

The ten-day week was used in antiquity (reportedly as early as in the Bronze Age Xia Dynasty).[1]

In the Chinese calendar, the months begin on the day of the dark moon, and end on the day before the next dark moon. There are 29 or 30 days in a month, but the month length is float. The month with 30 days is called the long month (Chinese: 大月), and the month with 29 days is called the short month (Chinese: 小月). The days in the months are marked with the ordinal number from 1. However, in the Chinese calendar, the dates are normalized to two characters, such as Chūyī (Chinese: 初一), Shíwǔ (Chinese: 十五), Niànsān (Chinese: 廿三).

Relation between moon phases and dates

The Chinese use an astronomical calendar, and the years and months are irregular. But, there are some rhythms for the laws of astronomy.

In the Chinese calendar, the years begin on the 1st day of the 1st month, and the first and last month are named as Zhēngyuè(Chinese: 正月) and Làyuè(traditional Chinese: 臘月; simplified Chinese: 腊月) specially. The stem-branches are used to count the year, and according to usual practice, each branches corresponds an animal zodiac. people used to call the animal zodiac. After the era system was abolished, the stem-branches is the only formal year numbering method.

In China, age for official use is based on the Gregorian calendar. For traditional use, age is based on the Chinese calendar. From birthday to the end of the year, it's one year old. After each New Year's Eve, add one year. "Bid farewell to the last age(traditional Chinese: 辭舊嵗; simplified Chinese: 辞旧岁; pinyin: cí jiùsuì)" is the literary express of New Year Ceremony. For example, if one's birthday is Làyuè 29th 2013, he is 2 years old at Zhēngyuè 1st 2014. On the other hand, people say months old instead of years old, if someone is too young. It's that the age sequence is "1 month old, 2 months old, ... 10 months old, 2 years old, 3 years old..."

In the ancient system, the years are numbered from 1 when the new emperor ascended the throne or the authority released the reign title. The first reign title is Jiànyuán (Chinese: 建元, from 140 BC), the last reign title is Xuāntǒng (traditional Chinese: 宣統; simplified Chinese: 宣统, from 1908). The era system was abolished in 1910. The Christian era or Republican era took over to express the year in the Chinese calendar.

On the other hand, the Christian era is simulated in the 20th century, such as:

Anno Huángdì (Chinese: 黄帝紀年), upon the beginning of the reign of the Yellow Emperor, 2698+AD=AH

Anno Yáo (Chinese: 唐尧紀年), upon the beginning of the reign of Emperor Yao, 2156+AD=AY

Anno Unity (Chinese: 統一紀年), upon the beginning of the reign of Qin Shi Huang, 221+AD=AU

Generally, no reference date is widely accepted. On January 2, 1912, Sun Yat-sen declared a change to the official calendar and era. In his declaration, January 1, 1912 is called Shíyīyuè 13th, 4609 AH which implied an epoch of 2698 BC. The implication was adopted by many overseas Chinese communities outside Southeast Asia such as San Francisco's Chinatown.[4]

In the 17th century, the Jesuits tried to determine what year should be considered the epoch of the Han calendar. In his Sinicae historiae decas prima (first published in Munich in 1658), Martino Martini (1614–1661) dated the ascension of the Yellow Emperor to 2697 BC, but started the Chinese calendar with the reign of Fuxi, which he claimed started in 2952 BC. Philippe Couplet's (1623–1693) Chronological table of Chinese monarchs (Tabula chronologica monarchiae sinicae; 1686) also gave the same date for the Yellow Emperor. The Jesuits' dates provoked great interest in Europe, where they were used for comparisons with Biblical chronology. Modern Chinese chronology has generally accepted Martini's dates, except that it usually places the reign of the Yellow Emperor in 2698 BC and omits the Yellow Emperor's predecessors Fuxi and Shennong, who are considered "too legendary to include".

Starting in 1903, radical publications started using the projected date of birth of the Yellow Emperor as the first year of the Han calendar. Different newspapers and magazines proposed different dates. Jiangsu, for example, counted 1905 as year 4396 (use an epoch of 2491 BC), whereas the newspaper Ming Pao (traditional Chinese: 明報; simplified Chinese: 明报) reckoned 1905 as 4603 (use an epoch of 2698 BC). Liu Shipei (劉師培; 1884–1919) created the Yellow Emperor Calendar, now often used to calculate the date, to show the unbroken continuity of the Han race and Han culture from earliest times. Liu's calendar started with the birth of the Yellow Emperor, which he determined to be 2711 BC. There is no evidence that this calendar was used before the 20th century.[5] Liu calculated that the 1900 international expedition sent by the Eight-Nation Alliance to suppress the Boxer Rebellion entered Beijing in the 4611th year of the Yellow Emperor.

Shao Yong (Chinese: 邵雍 1011–1077), a philosopher, cosmologist, poet, and historian who greatly influenced the development of Neo-Confucianism in China, introduced a timing system in his The Ultimate which Manages the World (traditional Chinese: 皇極經世; simplified Chinese: 皇极经世; pinyin: Huángjíjīngshì) In his time system, 1 yuán (Chinese: 元), which contains 12'9600 years, is a lifecycle of the world. Each yuán is divided into 12 huì (traditional Chinese: 會; simplified Chinese: 会). Each huì is divided into 30 yùn (traditional Chinese: 運; simplified Chinese: 运), and each yùn is divided into 12 shì (Chinese: 世). So, each shì is equivalent to 30 years. The yuán-huì-yùn-shì corresponds with nián-yuè-rì-shí. So the yuán-huì-yùn-shì is called the major tend or the numbers of the heaven, and the nián-yuè-rì-shí is called the minor tend or the numbers of the earth.

The minor tend of the birth is adapted by people for predicting destiny or fate. The numbers of nián-yuè-rì-shí are encoded with stem-branches and show a form of Bāzì. The nián-yuè-rì-shí are called the Four Pillars of Destiny. For example, the Bāzì of the Qianlong Emperor is Xīnmǎo, Dīngyǒu, Gēngwǔ, Bǐngzǐ (辛卯、丁酉、庚午、丙子). Shào's Huángjíjīngshì recorded the history of the timing system from the first year of the 180th yùn or 2149th shì (HYSN 0630-0101, 2577 BC) and marked the year with the reign title from the Jiǎchénnián of the 2156th shì (HYSN 0630-0811, 2357 BC, Tángyáo 1, traditional Chinese: 唐堯元年; simplified Chinese: 唐尧元年). According to this timing system, 2014-1-31 is HYSN/YR 0712-1001/0101.

The table below shows the kinds of year number system along with correspondences to the Western (Gregorian) calendar. Alternatively, see this larger table of the full 60-year cycle.

After Qin Shi Huang unified China under the Qin dynasty, the Qin's calendar (traditional Chinese: 秦曆; simplified Chinese: 秦历) was released. The Qin's calendar follows the rules of Zhuanxu's calendar, but the months order follows the Xia calendar. The months in the year are from the 10th month to the 9th month, and the intercalary month is called as the second Jiuyue (traditional Chinese: 後九月; simplified Chinese: 后九月). In the early Han dynasty, the Qin calendar continued to be used.

Emperor Wu of the Han dynasty introduced reforms in the halfway of his administration. His Taichu or Grand Inception Calendar (traditional Chinese: 太初曆; simplified Chinese: 太初历) introduced 24 solar terms which decides the month names. The solar year was defined as 365 385/1539 days, and divided into 24 solar terms. Each couples of solar terms are associated into 12 climate terms. The lunar month was defined as 29 43/81 days and named according to the closest climate term. The mid-climate in the month decides the month name, and a month without mid-climate is an intercalary.

The Taichu calendar established the frame of the Chinese calendar, Ever since then, there are over 100 official calendars in Chinese which are consecutive and follow the structure of Tàichū calendar both. There're several innovation in calendar calculation in the history of over 2100 years, such as:

In the Dàmíng Calendar released in Tiānjiān 9 (Chinese: 天监九年, 510) of the Liang dynasty, Zhu Chongzhi introduced the equation of equinoxes.
Actual syzygy method was adopted to decide the month from the Wùyín Yuán Calendar, which was released in Wǔdé 2 (Chinese: 武德二年, 619) of the Tang dynasty.
The real measured data was used in calendar calculation from Shòushí Calendar, which was released in Zhìyuán 18 (Chinese: 至元十八年, 1281) of the Yuan dynasty. And the tropical year is fixed at 365.2425 days, the same as the Gregorian calendar established in 1582.,[6] and derived spherical trigonometry.[7][8][9]

In the late Ming dynasty, Xu Guangqi and his colleagues worked out the new calendar upon the western astronomical arithmetic. But, the new calendar is not released before the end of the Ming dynasty. In the early Qing dynasty, Johann Adam Schall von Bell submitted the calendar to the Shunzhi Emperor. The Qing government released the calendar with a name, the Shíxiàn calendar, which means seasonal charter. In the Shíxiàn calendar, the solar terms each correspond to 15° along the ecliptic. It makes the Chinese calendar develop into an astronomical calendar. However, the length of the climate term near the perihelion is shorter than 30 days and there may be two mid-climate terms. The rule of the mid-climate terms decides the months, which is used for thousands years, lose its validity. The Shíxiàn calendar changed the rule to "decides the month in sequence, except the intercalary month".

Currently, the Chinese calendar follows the rules of the Shíxiàn calendar, except that: changed the baseline to the Chinese Standard Time, and adopt the real astronomical data of observatories against the theoretical calculation.

To optimize the Chinese calendar, astronomers and astrophiles released many proposals. A typical proposal was released by Gao Pingzi (Chinese: 高平子; 1888-1970), a Chinese astronomer who was one of the founders of Purple Mountain Observatory. In his proposal, the month numbers are calculated before the dark moons and the solar terms were rounded to day. Upon his proposal, the month numbers are the same for the Chinese calendar upon different time zones.