From Infogalactic: the planetary knowledge core
Jump to: navigation, search
For other uses, see I.C. Brătianu.

The "Ion C. Brătianu" National College is a comprehensive four-year public high school enrolling 1,200 students in grades 9 through 12. It is named after the Romanian politician Ion C. Brătianu.

The school opened in the fall of 1866 as the first teaching institution in the town of Piteşti and evolved throughout the years, from the original primary school to a secondary 8 grades school, then to a 12 grades one, and finally became a high-school (9-12 grades) in 1965. Today, "Brătianu" is recognized as one of the best high-schools in Romania.[citation needed] Because of its remarkable selectivity, the high admission percentage of its graduates, the very high overall GPA of its students and their excellent results in National Olympiads and other contests, in 1997 the "Ion C. Brătianu" High School was awarded the title of "National College" (Colegiu Național).[1] 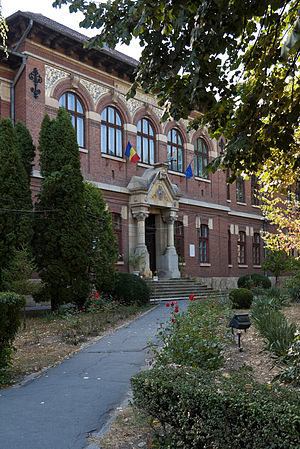 The academic program is organized on a 2 shift schedule – the morning shift and the evening shift. In accordance to the Romanian curriculum imposed by the Ministry, the students have a fixed weekly schedule that is repeated throughout the two semesters of the academic year. They are organized in groups of approximately 30 students and each of these groups has a certain classroom assigned to it. Students attend six – 50 minutes classes daily.

AP courses or Honors classes are mainly unknown to the Romanian system but their alternative is found in all highschools: special class profiles. Therefore, although the core curricula is imposed by the legislation of the Ministry, the highschool offers partially different kinds of classes depending on the profile chosen by each of the 30 students groups. The offered profiles refer to the class/classes that group should focus upon as it follows:

The grading system used is the Romanian numerical grading system, with grades ranging from 1 to 10, 10 being the maximum; 5 is the graduating mark. At the end of each semester and at the end of the year, the final grade is obtained through the arithmetic mean of the grades received throughout the year. Where term papers apply (Romanian, Mathematics, Physics, Informatics), this arithmetic mean is multiplied by 3 added with the term paper’s result and divided by 4 to obtain the final grade.

An American style ranking system is not offered but each group of students calculates its own rank and awards diplomas for the highest 3 final grades, and at the end of the 12th grade the school awards the distinction of Chief of graduates to the student with the highest final grade over the four years.

The examination all Romanian students take when they graduate the high school studies is the Baccalaureate exam which consists of the following subjects: Romanian – speaking and writing, a foreign language – speaking, Mathematics, a science (the special profile assigned science – if on a special profile class) and a social science. The graduating mark for the Baccalaureate is 6.

The statistical data for the 2009 class are:

- The final grade of the Chief of graduates : 10

- The percentage of Baccalaureate graduates : 99.71%

Ciprian Manolescu, the only three-time winner of the International Mathematics Olympiad, attended Brătianu, as have other 7 international olympiad gold medallists at mathematics, biology and physics.

In arts the high school had many talents like the poets Ion Barbu and Ion Minulescu, Vladimir Streinu, George Valsan, the painters Costin Petrescu and Rudolf Schweitzer-Cumpăna, the writers Tudor Teodorescu Branişte and George Ulieru, the composer Nicolae Brânzeu or Robert Turcescu .