From Infogalactic: the planetary knowledge core
Jump to: navigation, search
For other uses, see Timor (disambiguation).

Timor is an island at the southern end of Maritime Southeast Asia, north of the Timor Sea. The island is divided between the sovereign states of East Timor, on the eastern part, and Indonesia, on the western part. The Indonesian part, also known as West Timor, constitutes part of the province of East Nusa Tenggara. Within West Timor lies an exclave of East Timor called Oecusse District. The island covers an area of 30,777 square kilometres. The name is a variant of timur, Malay for "east"; it is so called because it lies at the eastern end of the Lesser Sunda Islands. 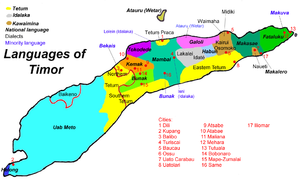 Anthropologists identify eleven distinct ethno-linguistic groups in Timor. The largest are the Atoni of western Timor, and the Tetum of central and eastern Timor.[1] Most indigenous Timorese languages belong to the Timor–Babar branch of the Austronesian languages spoken throughout the Indonesian archipelago. The non-Austronesian languages are thought to be related to languages spoken on Halmahera and in Western New Guinea.[1] Some are so mixed it is difficult to tell which family they descend from.

The official languages of East Timor are Tetum and Portuguese, while in West Timor it is Indonesian. Indonesian is also widely spoken and understood in East Timor.

Christianity is the dominant religion throughout the island of Timor, at about 90% of the population. Roman Catholics are the majority on both halves of the island; Catholics outnumber Protestants in West Timor by about a 3:2 ratio. Muslims and Animists make up most of the remainder, at about 5% each.

Timor is located north of Australia, and is one of the easternmost Sunda Islands. Together with Sumba, Babar and associated smaller islands, Timor forms the southern outer archipelago of the Lesser Sunda Islands with the inner islands of Flores, Alor and Wetar to the north, and beyond them Sulawesi.

Timor is the principal island of the Outer Banda Arc, which has been upthrust by collision with the Australian continent. Timor has older geology and lacks the volcanic nature of the northern Lesser Sunda Islands. The orientation of the main axis of the island also differs from its neighbors. These features have been explained as the result of being on the northern edge of the Indo-Australian Plate as it meets the Eurasian Plate and pushes into South East Asia.[2] The climate includes a long dry season with hot winds blowing over from Australia. Rivers on the island include the Southern and Northern Laclo Rivers in East Timor.

The largest towns on the island are the provincial capital of Kupang in West Timor, Indonesia and the Portuguese colonial towns of Dili the capital, and Baucau in East Timor. Poor roads make transport to inland areas difficult, in East Timor especially.[3] East Timor is a poor country, with health issues including malaria and dengue fever. Sources of revenue include gas and oil in the Timor Sea, coffee growing and tourism.

Timor and its offshore islands such as Atauro, a former place of exile increasingly known for its beaches and coral[citation needed], as well as Jaco along with Wetar and the other Barat Daya Islands to the northeast constitute the Timor and Wetar deciduous forests ecoregion. The natural vegetation was tropical dry broadleaf forests with an undergrowth of shrubs and grasses supporting a rich wildlife[citation needed]. However much of the original forest has been cleared for farming[citation needed], especially on the coasts of Timor and on the smaller islands like Atauro. Apart from one large block in the centre of Timor only patches remain[citation needed]. This ecoregion is part of the Wallacea area with a mixture of plants and animals of Asian and Australasian origin; it lies in the western part of Wallacea, in which Asian species predominate.

Many trees are deciduous or partly deciduous, dropping their leaves during the dry season, there are also evergreen and thorn trees in the woodland. Typical trees of the lowland slopes include Sterculia foetida, Calophyllum teysmannii and Aleurites moluccanus.

During the Pleistocene epoch, Timor was the abode of extinct giant monitor lizards similar to the Komodo dragon. Like Flores, Sumba and Sulawesi, Timor was also once a habitat of extinct dwarf stegodonts, relatives of elephants.

Fauna of today includes a number of endemic species such as the distinctive Timor shrew and Timor rat. The northern common cuscus, a marsupial of Australasian origin occurs as well, but is thought to be introduced.[4] The island have a great number of birds, mainly of Asian origin with some of Australasian origin. There is a total of 250 species of which twenty four are endemic, due to the relative isolation of Timor, including five threatened species; the slaty cuckoo-dove, Wetar ground dove, Timor green pigeon, Timor imperial pigeon, and iris lorikeet.[5]

Saltwater crocodiles are found in the wetlands whereas reticulated pythons can be found in forests and grasslands of Timor. However, the population sizes and status are unknown.

Late Cretaceous fossils of marine vertebrates are known from East Timor deposits. These include mosasaurs such as Globidens timorensis, lamniforme sharks, coelacanths and the choristodere Champsosaurus.[6] 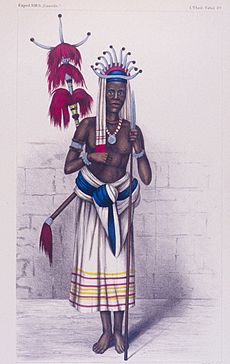 Portrait of a Timor warrior at the area of Kupang in 1875 from report of expedition of German SMS Gazelle.
See also: History of East Timor and History of Indonesia

The earliest historical record about Timor island is 14th century Nagarakretagama, Canto 14, that identify Timur as an island within Majapahit's realm. Timor was incorporated into ancient Javanese, Chinese and Indian trading networks of the 14th century as an exporter of aromatic sandalwood, slaves, honey and wax, and was settled by both the Portuguese, in the end of the 16th century, and the Dutch, based in Kupang, in the mid-17th century.

As the nearest island with a European settlement at the time, Timor was the destination of William Bligh and seamen loyal to him following the infamous mutiny on the Bounty in 1789. It was also where survivors of the wrecked HMS Pandora, sent to arrest the Bounty mutineers, landed in 1791 after that ship sank in the Great Barrier Reef.

The island has been politically divided in two parts for centuries. The Dutch and Portuguese fought for control of the island until it was divided by treaty in 1859, but they still did not formally resolve the matter of the boundary until 1912. West Timor, was known as Dutch Timor until 1949 when it became Indonesian Timor, a part of the nation of Indonesia which was formed from the old Netherlands East Indies; while East Timor was known as Portuguese Timor, a Portuguese colony until 1975. It includes the enclave of Oecussi-Ambeno in West Timor. 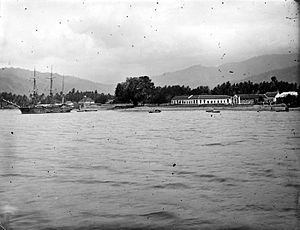 Boats along the Timor coast

Japanese forces occupied the whole island from 1942 to 1945. They were resisted in a guerrilla campaign led initially by Australian commandos.

Following the military coup in Portugal in 1974 the Portuguese began to withdraw from Timor, the subsequent internal unrest and fear of the communist Fretilin party encouraged an invasion by Indonesia, who opposed the concept of an independent East Timor. In 1975, East Timor was annexed by Indonesia and became known as Timor Timur or 'Tim-Tim' for short. It was regarded by Indonesia as the country's 27th province, but this was never recognised by the United Nations (UN) or Portugal.

The people of East Timor, through Falintil the military wing of Fretilin, resisted 35,000 Indonesian troops in a prolonged guerrilla campaign, but the whole island remained under Indonesian control until a referendum held in 1999 under a UN sponsored agreement between Indonesia and Portugal in which its people rejected the offer of autonomy within Indonesia. The UN then temporarily governed East Timor until it became independent as Timor-Leste in 2002 under the presidency of Falintil leader Xanana Gusmão. Although political strife continued as the new nation coped with poverty the UN presence was much reduced.

A group of people on the Indonesian side of Timor have been reported active since 2001 trying to establish a Great Timor State.[7] However, there is no real evidence whatsoever that the people of West Timor, most of whom are from Atoni ethnicity who are the traditional enemy of the East Timorese, have any interest in joining their tribal enemies. Additionally, East Timor's independence movement never laid claim to West Timor at any time, before the Indonesian invasion or thereafter. Similarly, the government of East Timor fully recognizes Indonesia's existing boundaries as inherited from the Netherlands East Indies. This is similar to the position taken by Papua New Guinea in relation to West Papua, when the former became independent of Australia.