Torrens title is a system of land title in which a register of land holdings maintained by the state guarantees an indefeasible title to those included in the register. Land ownership is transferred through registration of title instead of using deeds. Its main purpose is to simplify land transactions and to certify to the ownership of an absolute title to realty. It has become pervasive around the countries strongly influenced by Britain, especially those in the Commonwealth of Nations. It is named after Sir Robert Richard Torrens, GCMG (1814 – 31 August 1884), who was the third Premier of South Australia.

The Torrens title system operates on the principle of "title by registration" (granting the high defeasibility of a registered ownership) rather than "registration of title." The system does away with the need for a chain of title (i.e. tracing title through a series of documents). The State guarantees title and is usually supported by a compensation scheme for those who lose their title due to the State's operation.[citation needed]

In most jurisdictions, there will be parcels of land which are still unregistered.[1]

At common law, land owners needed to prove their ownership of a particular piece of land back to the earliest grant of land by the Crown to its first owner. The documents relating to transactions with the land were collectively known as the "title deeds" or the "chain of title". This event could have occurred hundreds of years prior and could have been intervened by dozens of changes in the land's ownership. A person's ownership over land could also be challenged, potentially causing great legal expense to land owners and hindering development.

Even an exhaustive title search of the chain of title would not give the purchaser complete security, largely because of the principle, nemo dat quod non habet ("no one gives what he does not have") and the ever-present possibility of undetected outstanding interests. For example, in the UK Court of Chancery case Pilcher v Rawlins (1872),[3][4] the vendor conveyed the fee-simple estate to P1, but retained the title deeds and fraudulently purported to convey the fee-simple estate to P2. The latter could receive only the title retained by the vendor—in short, nothing. However, the case was ultimately decided in favor of P2, over P1. The courts of equity could not bring themselves to decide against a totally innocent (without notice) purchaser.[5]

The common-law position has been changed in minor respects by legislation designed to minimize the searches that should be undertaken by a prospective purchaser. In some jurisdictions, a limitation has been placed on the period of commencement of title a purchaser may require.

Moreover, though a register of who owned what land was maintained, it was unreliable and could be challenged in the courts at any time. The limits of the deeds-registration system meant that transfers of land were slow, expensive, and often unable to create certain title. 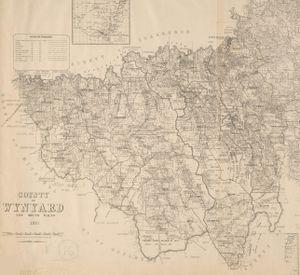 Under the system many maps showing Australian property boundaries need to be kept.

A boom in land speculation and a haphazard grant system resulted in the loss of over 75% of the 40,000 land grants issued in the colony (now state) of South Australia in the early 1800s. To resolve the deficiencies of the common law and deeds registration system, Robert Torrens, a member of the colony's House of Assembly, proposed a new title system in 1858, and it was quickly adopted. The Torrens title system was based on a central registry of all the land in the jurisdiction of South Australia, embodied in the Real Property Act 1886 (SA). All transfers of land are recorded in the register. Most importantly, the owner of the land is established by virtue of his name being recorded in the government's register. The Torrens title also records easements and the creation and discharge of mortgages.

The historical origins of the Torrens title are a matter of considerable controversy. Torrens himself acknowledged adapting his proposals from earlier systems of transfer and registration, particularly the system of registration of merchant ships in the United Kingdom. The Prussian mortgage legislation also served as an example.[6] James E. Hogg, in Australian Torrens System with Statutes (1905), has shown that Torrens derived ideas from many other sources and that he received assistance from a number of persons within South Australia. Stanley Robinson, in Transfer of Land in Victoria (1979) has argued that Ulrich Hübbe, a German lawyer living in South Australia in the 1850s, made the most important single contribution by adapting principles borrowed from the Hanseatic registration system in Hamburg.

Nevertheless, it cannot be denied that Torrens' political activities were substantially responsible for securing acceptance of the new system in South Australia and eventually, in other Australian colonies and New Zealand.[citation needed] He oversaw the introduction of the system in the face of often-vicious attack from his opponents, many of whom were lawyers, who feared loss of work in conveyancing because of the introduction of a simple scheme. The Torrens system was also a marked departure from the common law of real property and its further development has been characterised by the reluctance of common-law judges to accept it.[citation needed]

On the first registration of land under the system, the land is given a unique number (called a folio) which identifies the land by reference to a registered plan. The folio records the dimensions of the land and its boundaries, the name of the registered owner, and any legal interests that affect title to the land. To change the boundaries of a parcel of land, a revised plan must be prepared and registered. Once registered, the land cannot be withdrawn from the system.[citation needed]

A transfer of ownership of a parcel of land is effected by a change of the record on the register. The registrar has a duty to ensure that only legally valid changes are made to the register. To this end, the registrar will indicate what documentation he or she will require to be satisfied that there has in fact been a change of ownership. A change of ownership may come about because of a sale of the land, or the death of the registered owner, or as a result of a court order, to name only the most common ways that ownership may change. Similarly, any interest which affects or limits the ownership rights of the registered owner, such as a mortgage, can also be noted on the register. There are legal rules which regulate the rights and powers of each of these interests in relation to each other and in relation to third parties.

The State guarantees the accuracy of the register and undertakes to compensate those whose rights are adversely affected by an administrative error.[7] Claims for compensation are very rare.[citation needed]

The main difference between a common law title and a Torrens title is that a member of the general community, acting in good faith, can rely on the information on the land register as to the rights and interests of parties recorded there, and act on the basis of that information. A prospective purchaser, for example, is not required to look beyond that record. He or she does not need even to examine the Certificate of Title, the register information being paramount. This contrasts with a common law title, which is based on the principle that a vendor cannot transfer to a purchaser a greater interest than he or she owns. As with a chain, the seller's title is as good as the weakest link of the chain of title. Accordingly, if a vendor's common law title is defective in any way, so would be the purchaser's title. Hence, it is incumbent on the purchaser to ensure that the vendor's title is beyond question. This may involve both inquiries and an examination of the chain of title.

The registered proprietor of Torrens land is said to have an indefeasible title. That means that only in very limited circumstances can his or her title be challenged. These challenges are established in the legislation, and are subject to rules made by courts. For example, in Victoria such challenges are established in section 42 of the Transfer of Land Act 1958 (Vic). A court can also adjust rights as between parties before it, and order changes to the register accordingly.

Indefeasibility of title applies to the registered proprietor or joint proprietors of land.

Different states have different laws and provisions. The following, for example, relates to the jurisdiction of the Australian state of Victoria, where the Torrens system is manifested in the Transfer of Land Act 1958 (Vic). Upon registration of his interest and subsequent recording on Title of his interest, the registered owner's claim to his interest in that land is superior to all other interests in the land other than the circumstances listed in s.42 Transfer of Land Act 1958 (Vic).

This section indicates that the registered interest holder will be free from all encumbrances other than inter alia:

Additionally, there exist exceptions or circumstances that can penetrate the indefeasibility. Common factors that, when evidenced by a party, may penetrate and defeat the registered holder's claim include:

The adoption of the Torrens title registry throughout the British Commonwealth, and its legal context, was covered in depth by James Edward Hogg in 1920.[9]

The second Torrens jurisdiction in the world was established in 1861 in the then-British colony of Vancouver Island, now part of the Canadian province of British Columbia.[13] Canada, through the federal Parliament in 1886, implemented the Torrens system in the Northwest Territories.[14] It has continued to be used by the three Prairie provinces (Alberta, Saskatchewan and Manitoba) into which the southern part of the Northwest Territories was divided.[15] British Columbia uses a modified Torrens system. Since 1885, Ontario has used an English system,[16] which is not a Torrens system, but it has similar purposes. In Ontario, electronic registration led to this version covering almost all land, but the past deeds registration still governs some issues. For properties still under deeds registration, a 40-year rule governed title, but the government converted them under a streamlined process.[17] New Brunswick is in the process of converting all titles to a Torrens system, with the expense of the changeover charged to the purchaser.[18] Quebec, being a civil rather than common law jurisdiction, uses the cadastre system.

In the Dominican Republic, the system was implemented in 1920, and has been in use since.[citation needed]

Israel has been using the Torrens Title system since its foundation. The system had been first implemented by the British in Mandatory Palestine.

Malaysia has adopted a version of the Torrens system, enacted in the National Land Code, Act 56 of 1965.[19]

New Zealand also adopted a similar system from 1870.[20][21] The Land Transfer (Compulsory Registration of Titles) Act 1924 brought most of the remaining land in the country under the Torrens system and by 1951 the register was considered complete, although small remnants of land may still exist under the deeds system. [22]

Singapore has adopted a version of the Torrens system, enacted in the Land Titles Act, Chapter 157.[23]

Thailand adopted the Torrens system in 1901 after King Chulalongkorn established The Royal Thai Survey Department, a Special Services Group of the Royal Thai Armed Forces, engaged in Cadastral survey, which is the survey of specific land parcels to define ownership for land registration, and for equitable taxation.[24]

California attempted to use a Torrens system, but it was later repealed. As many as twenty U.S. states have experimented with Torrens title at one time or another; but most retreated under pressure from title insurance companies (who successfully lobbied against land registration systems based on their alleged vulnerability to fraud and corruption).