From Infogalactic: the planetary knowledge core
Jump to: navigation, search
For other ships with the same name, see USS Langley.

USS Langley (CV-1/AV-3) was the United States Navy's first aircraft carrier, converted in 1920 from the collier USS Jupiter (AC-3), and also the U.S. Navy's first turbo-electric-powered ship. Conversion of another collier was planned but canceled when the Washington Naval Treaty required the cancellation of the partially built battlecruisers Lexington and Saratoga, freeing up their hulls for conversion to the aircraft carriers CV-2 and CV-3. Langley was named after Samuel Pierpont Langley, an American aviation pioneer. Following another conversion, to a seaplane tender, Langley fought in World War II. On 27 February 1942, she was attacked by dive bombers[2] of the Japanese 21st and 23rd Naval Air Flotillas[3] and so badly damaged that she had to be scuttled by her escorts.

President William H. Taft attended the ceremony when Jupiter's keel was laid down on 18 October 1911 at the Mare Island Naval Shipyard in Vallejo, California. She was launched on 14 August 1912 sponsored by Mrs. Thomas F. Ruhm; and commissioned on 7 April 1913 under Commander Joseph M. Reeves.[4] Her sister ships were Cyclops, which disappeared without a trace in World War I, Proteus, and Nereus, which disappeared on the same route as Cyclops in World War II.

After successfully passing her trials as the first turbo-electric-powered ship of the US Navy, Jupiter embarked a United States Marine Corps detachment at San Francisco, California, and reported to the Pacific Fleet at Mazatlán Mexico on 27 April 1914, bolstering U.S. naval strength on the Mexican Pacific coast in the tense days of the Veracruz crisis. She remained on the Pacific coast until she departed for Philadelphia on 10 October. En route, the collier steamed through the Panama Canal on Columbus Day, the first vessel to transit it from west to east.[4]

Prior to America's entry into World War I, she cruised the Atlantic and Gulf of Mexico attached to the Atlantic Fleet Auxiliary Division. The ship arrived at Norfolk, Virginia on 6 April 1917, and, assigned to the Naval Overseas Transport Service, interrupted her coaling operations by two cargo voyages to France in June 1917 and November 1918. The first voyage transported a naval aviation detachment of 7 officers and 122 men to England.[5] It was the first U.S. aviation detachment to arrive in Europe and was commanded by Lieutenant Kenneth Whiting, who became Langley's first executive officer five years later.[5] Jupiter was back in Norfolk on 23 January 1919 whence she sailed for Brest, France on 8 March for coaling duty in European waters to expedite the return of victorious veterans to the United States. Upon reaching Norfolk on 17 August, the ship was transferred to the West Coast. Her conversion to an aircraft carrier was authorized on 11 July 1919, and she sailed to Hampton Roads, Virginia on 12 December, where she decommissioned on 24 March 1920.[4]

File:CV-1 May1921 NorfolkNS NAN12-70.jpg
Langley being converted from a collier to an aircraft carrier at Norfolk Naval Shipyard in 1921. 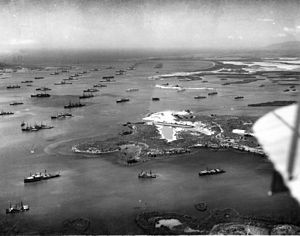 US fleet at Guantanamo Bay, 1927. Visible amidst about 15 battleships at the top of the photograph, is the aircraft carrier USS Langley. 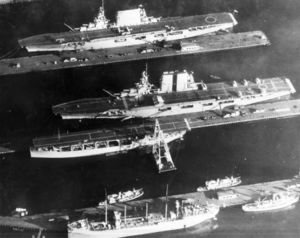 Langley at Puget Sound Navy Yard, alongside Saratoga (with black stripe on funnel) and Lexington in 1929

Jupiter was converted into the first U.S. aircraft carrier at the Navy Yard, Norfolk, Virginia, for the purpose of conducting experiments in the new idea of seaborne aviation. On 11 April 1920, she was renamed Langley in honor of Samuel Pierpont Langley, an American astronomer, physicist, aeronautics pioneer and aircraft engineer, and she was given the hull number CV-1. She recommissioned on 20 March 1922 with Commander Kenneth Whiting in command.[4]

As the first American aircraft carrier, Langley was the scene of several seminal events in U. S. naval aviation. On 17 October 1922, Lt. Virgil C. Griffin piloted the first plane—a Vought VE-7—launched from her decks.[6] Though this was not the first time an airplane had taken off from a ship, and though Langley was not the first ship with an installed flight deck, this one launching was of monumental importance to the modern U.S. Navy.[4] The era of the aircraft carrier was born introducing into the navy what was to become the vanguard of its forces in the future. With Langley underway nine days later, Lieutenant Commander Godfrey de Courcelles Chevalier made the first landing in an Aeromarine 39B.[6] On 18 November, Commander Whiting was the first aviator to be catapulted from a carrier's deck.[4][7][8]

An unusual feature of Langley was provision for a carrier pigeon house on the stern between the 5 in (130 mm)/51 cal guns.[9] Pigeons had been carried aboard seaplanes for message transport since World War I, and were to be carried on aircraft operated from Langley.[9] The pigeons were trained at the Norfolk Naval Shipyard while Langley was undergoing conversion.[10] As long as the pigeons were released a few at a time for exercise, they returned to the ship; but when the whole flock was released while Langley was anchored off Tangier Island, the pigeons flew south and roosted in the cranes of the Norfolk shipyard.[10] The pigeons never went to sea again and the former pigeon house became the executive officer's quarters;[9] but the early plans for conversion of Lexington and Saratoga included a compartment for pigeons.[10]

By 15 January 1923, Langley had begun flight operations and tests in the Caribbean Sea for carrier landings. In June, she steamed to Washington, D.C., to give a demonstration at a flying exhibition before civil and military dignitaries. She arrived at Norfolk on 13 June, and commenced training along the Atlantic coast and Caribbean which carried her through the end of the year. In 1924, Langley participated in more maneuvers and exhibitions, and spent the summer at Norfolk for repairs and alterations, she departed for the west coast late in the year and arrived San Diego, California on 29 November to join the Pacific Battle Fleet.[4]

In 1927, the USS Langley was at the Guantanamo Bay Naval Base.[11] For the next 12 years, she operated off the California coast and Hawaii engaged in training fleet units, experimentation, pilot training, and tactical-fleet problems.[4] The Langley was featured in the 1929 silent film about naval aviation The Flying Fleet.[12]

File:USS Langley (AV-1).jpg
Langley after conversion to a seaplane tender, 1937. 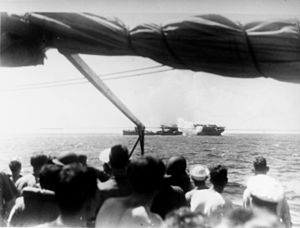 On 25 October 1936, she put into Mare Island Navy Yard, California for overhaul and conversion to a seaplane tender. Though her career as a carrier had ended, her well-trained pilots had proved invaluable to the next two carriers, Lexington and Saratoga[4] (commissioned on 14 December and 16 November 1927, respectively).

Langley completed conversion on 26 February 1937 and was assigned hull number AV-3 on 11 April. She was assigned to the Aircraft Scouting Force and commenced her tending operations out of Seattle, Washington, Sitka, Alaska, Pearl Harbor, and San Diego, California. She departed for a brief deployment with the Atlantic Fleet from 1 February-10 July 1939, and then steamed to assume duties with the Pacific Fleet at Manila arriving on 24 September.[4]

On the entry of the U.S. into World War II, Langley was anchored off Cavite, Philippines.[4][13] On 8 December, following the invasion of the Philippines by Japan, she departed Cavite for Balikpapan, in the Dutch East Indies. As Japanese advances continued, Langley departed for Australia, arriving in Darwin on 1 January 1942.[13] She then became part of the American-British-Dutch-Australian Command (ABDACOM) naval forces. Until 11 January, Langley assisted the Royal Australian Air Force in running anti-submarine patrols out of Darwin.[4][13]

Langley went to Fremantle, Australia to pick up Allied aircraft and transport them to Southeast Asia. Carrying 32 P-40 fighters belonging to the Far East Air Force's 13th Pursuit Squadron (Provisional).[13] At Fremantle Langley and Sea Witch, loaded with crated P-40s, joined a convoy designated MS.5 that had arrived from Melbourne composed of the United States Army Transport Willard A. Holbrook and the Australian transports Duntroon and Katoomba escorted by USS Phoenix departed Fremantle on 22 February.[4][14] Langley and Sea Witch left the convoy five days later to deliver the planes to Tjilatjap (Cilacap), Java.[4][14]

In the early hours of 27 February, Langley rendezvoused with her anti-submarine screen, the destroyers USS Whipple and USS Edsall.[4][13] At 11:40, about 75 mi (121 km) south of Tjilatjap, nine Aichi D3A1 "Val" dive bombers[2] of the Japanese 21st and 23rd Naval Air Flotillas[3] attacked her. The first and second Japanese strikes were unsuccessful, but in the third Langley took five hits and 16 crewmen were killed. The topside burst into flames, steering was impaired, and the ship developed a 10° list to port.[4][13] Unable to negotiate the narrow mouth of Tjilatjap harbor, Langley went dead in the water, as her engine room flooded. At 13:32, the order to abandon ship was passed.[4] The escorting destroyers fired nine 4 in (100 mm) shells and two torpedoes into Langley,[4] to ensure she didn't fall into enemy hands, and she sank. (Her approximate scuttle coordinates are: S 8° 51′ 04.20″ × E 109° 02′ 02.56″ Ap)[13] After being transferred to USS Pecos, many of her crew were lost when Pecos was sunk en route to Australia.[15] Thirty-one of the thirty-three pilots assigned to the 13th Pursuit Squadron being transported by Langley were lost with Edsall when she was sunk on the same day while responding to the distress calls of Pecos.[13]

Langley appears in several scenes of The Flying Fleet, a 1929 silent film about naval aviators.[12]