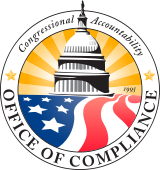 The United States Congress Office of Compliance is an independent federal agency within the legislative branch of the United States government. It was created to administer and enforce the Congressional Accountability Act of 1995. It is headquartered in Washington, D.C.

The office is responsible for fielding complaints about discrimination and harassment among the Capitol's workforce. In fiscal year 2013, allegations increased 20 percent from 2012, a change attributed to more people coming forward, not a major change in workplace behavior. [3]