From Infogalactic: the planetary knowledge core
Jump to: navigation, search
For other uses, see Clause (disambiguation).

In grammar, a clause is the smallest grammatical unit that can express a complete proposition.[1] A typical clause consists of a subject and a predicate,[2] where the predicate is typically a verb phrase – a verb together with any objects and other modifiers. However the subject is sometimes not expressed; this is often the case in null-subject languages if the subject is retrievable from context, but it also occurs in certain cases in other languages such as English (as in imperative sentences and non-finite clauses).

A simple sentence usually consists of a single finite clause with a finite verb that is independent. More complex sentences may contain multiple clauses. Main clauses (i.e. matrix clauses, independent clauses) are those that can stand alone as a sentence. Subordinate clauses (i.e. embedded clauses, dependent clauses) are those that would be awkward or incomplete alone.

Clauses according to a distinctive syntactic trait

Clauses can be classified according to a distinctive trait that is a prominent characteristic of their syntactic form. The position of the finite verb is one major trait used for classification, and the appearance of a specific type of focusing word (e.g. wh-word) is another. These two criteria overlap to an extent, which means that often no single aspect of syntactic form is always decisive in determining how the clause functions. There are, however, strong tendencies.

Standard SV-clauses (subject-verb) are the norm in English. They are usually declarative (as opposed to exclamative, imperative, or interrogative); they express information in a neutral manner, e.g.

Declarative clauses like these are by far the most frequently occurring type of clause in any language. They can be viewed as basic, other clause types being derived from them. Standard SV-clauses can also be interrogative or exclamative, however, given the appropriate intonation contour and/or the appearance of a question word, e.g.

a. The pig has not yet been fed? - Rising intonation on fed makes the clause a yes/no-question.

b. The pig has not yet been fed! - Spoken forcefully, this clause is exclamative.

c. You've been hungry for how long? - Appearance of interrogative word how and rising intonation make the clause a constituent question

Examples like these demonstrate that how a clause functions cannot be known based entirely on a single distinctive syntactic criterion. SV-clauses are usually declarative, but intonation and/or the appearance of a question word can render them interrogative or exclamative.

Most verb first clauses are main clauses. Verb first conditional clauses, however, must be classified as embedded clauses because they cannot stand alone.

Wh-clauses contain a wh-word. Wh-words often serve to help express a constituent question. They are also prevalent, though, as relative pronouns, in which case they serve to introduce a relative clause and are not part of a question. The wh-word focuses a particular constituent and most of the time, it appears in clause-initial position. The following examples illustrate standard interrogative wh-clauses. The b-sentences are direct questions (main clauses), and the c-sentences contain the corresponding indirect questions (embedded clauses):

Another important aspect of wh-clauses concerns the absence of subject-auxiliary inversion in embedded clauses, as illustrated in the c-examples just produced. Subject-auxiliary inversion is obligatory in matrix clauses when something other than the subject is focused, but it never occurs in embedded clauses regardless of the constituent that is focused. A systematic distinction in word order emerges across matrix wh-clauses, which can have VS order, and embedded wh-clauses, which always maintain SV order, e.g.

a. Something happened twice. - Standard declarative SV-clause
b. something that happened twice - Relative clause introduced by the relative pronoun that and modifying the indefinite pronoun something

a. I know everyone. - Standard declarative SV-clause
b. everyone I know - Relative clause lacking a relative pronoun entirely and modifying the indefinite pronoun everyone

a. The woman sang a song. - Standard declarative SV-clause
b. the woman who sang a song. - Relative clause introduced by the relative pronoun who and modifying the noun woman

These relative clauses are "free" because they can appear in a variety of syntactic positions; they are not limited to appearing as modifiers of nominals. The suffix -ever is often employed to render a standard relative pronoun as a pronoun that can introduce a free relative clause.

Clauses according to semantic predicate-argument function

A clause that functions as the argument of a given predicate is known as an argument clause. Argument clauses can appear as subjects, as objects, and as obliques. They can also modify a noun predicate, in which case they are known as content clauses.

a. the idea that we should alter the law - Argument clause that provides the content of a noun (i.e. content clause)
b. the idea that came up - Adjunct clause (relative clause) that modifies a noun

Adjunct clauses are embedded clauses that modify an entire predicate-argument structure. All clause types (SV-, verb first, wh-) can function as adjuncts, although the stereotypical adjunct clause is SV and introduced by a subordinator (i.e. subordinate conjunction, e.g. after, because, before, when, etc.), e.g.

These adjunct clauses modify the entire matrix clause. Thus before you did in the first example modifies the matrix clause Fred arrived. Adjunct clauses can also modify a nominal predicate. The typical instance of this type of adjunct is a relative clause, e.g.

An embedded clause can also function as a predicative expression. That is, it can form (part of) the predicate of a greater clause.

These predicative clauses are functioning just like other predicative expressions, e.g. predicative adjectives (That was good) and predicative nominals (That was the truth). They form the matrix predicate together with the copula.

Some of the distinctions presented above are represented in syntax trees. These trees make the difference between main and subordinate clauses very clear, and they also illustrate well the difference between argument and adjunct clauses. The following dependency grammar trees show that embedded clauses are dependent on an element in the main clause, often on a verb:[4]

These two embedded clauses are adjunct clauses because they provide circumstantial information that modifies a superordinate expression. The first is a dependent of the main verb of the matrix clause and the second is a dependent of the object noun. The arrow dependency edges identify them as adjuncts. The arrow points away from the adjunct towards it governor to indicate that semantic selection is running counter to the direction of the syntactic dependency; the adjunct is selecting its governor. The next four trees illustrate the distinction mentioned above between matrix wh-clauses and embedded wh-clauses 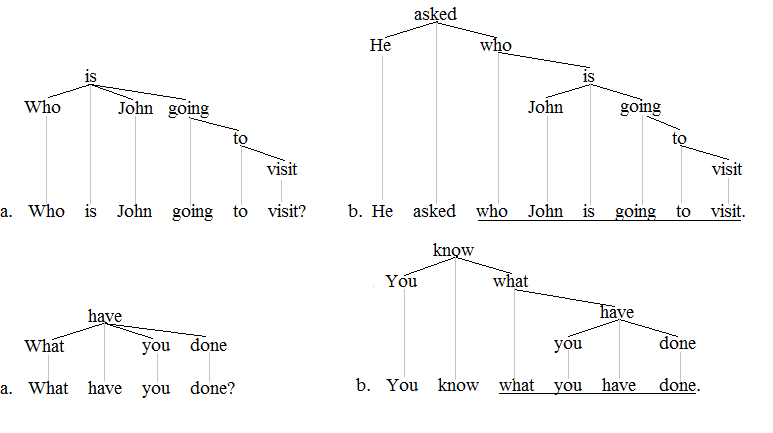 There has been confusion about the distinction between clauses and phrases. This confusion is due in part to how these concepts are employed in the phrase structure grammars of the chomskyan tradition. In the 1970s, chomskyan grammars began labeling many clauses as CPs (i.e. complementizer phrases) or as IPs (i.e. inflection phrases), and then later as TPs (i.e. tense phrases), etc. The choice of labels was influenced by the theory-internal desire to use the labels consistently. The X-bar schema acknowledged at least three projection levels for every lexical head: a minimal projection (e.g. N, V, P, etc.), an intermediate projection (e.g. N', V', P', etc.), and a phrase level projection (e.g. NP, VP, PP, etc.). Extending this convention to the clausal categories occurred in the interest of the consistent use of labels.

This use of labels should not, however, be confused with the actual status of the syntactic units to which the labels are attached. A more traditional understanding of clauses and phrases maintains that phrases are not clauses, and clauses are not phrases. There is a progression in the size and status of syntactic units: words < phrases < clauses. The characteristic trait of clauses, i.e. the presence of a subject and a (finite) verb, is absent from phrases. Clauses can be, however, embedded inside phrases.

The underlined words in the following examples are considered non-finite clauses, e.g.

Each of the gerunds in the a-sentences (stopping, attempting, and cheating) constitutes a non-finite clause. The subject-predicate relationship that has long been taken as the defining trait of clauses is fully present in the a-sentences. The fact that the b-sentences are also acceptable illustrates the enigmatic behavior of gerunds. They seem to straddle two syntactic categories: they can function as non-finite verbs or as nouns. When they function as nouns as in the b-sentences, it is debatable whether they constitute clauses, since nouns are not generally taken to be constitutive of clauses.

a. She refuses to consider the issue.
a. He attempted to explain his concerns.

The to-infinitives to consider and to explain clearly qualify as predicates (because they can be negated). They do not, however, take overt subjects. The subjects she and he are dependents of the matrix verbs refuses and attempted, respectively, not of the to-infinitives. Data like these are often addressed in terms of control. The matrix predicates refuses and attempted are control verbs; they control the embedded predicates consider and explain, which means they determine which of their arguments serves as the subject argument of the embedded predicate. Some theories of syntax posit the null subject PRO (i.e. pronoun) to help address the facts of control constructions, e.g.

b. She refuses PRO to consider the issue.
b. He attempted PRO to explain his concerns.

With the presence of PRO as a null subject, to-infinitives can be construed as complete clauses, since both subject and predicate are present.

One must keep in mind, though, that PRO-theory is particular to one tradition in the study of syntax and grammar (Government and Binding Theory, Minimalist Program). Other theories of syntax and grammar (e.g. Head-Driven Phrase Structure Grammar, Construction Grammar, dependency grammar) reject the presence of null elements such as PRO, which means they are likely to reject the stance that to-infinitives constitute clauses.

Another type of construction that some schools of syntax and grammar view as non-finite clauses is the so-called small clause. A typical small clause consists of a noun phrase and a predicative expression,[6] e.g.