From Infogalactic: the planetary knowledge core
(Redirected from Dingane)
Jump to: navigation, search

Dingane kaSenzangakhona Zulu (ca. 1795–1840)—commonly referred to as Dingane or Dingaan—was a Zulu chief who became king of the Zulu Kingdom in 1828.[1] He set up his royal capital UmGungundlovu, and one of numerous military encampments or kraals, in the Emakhosini valley just south of the White Umfolozi River on the slope of Lion Hill (Singonyama).

Dingane came to power in 1828 after assassinating his half-brother Shaka with the help of another brother, Umhlangana, as well as Mbopa, Shaka's advisor. They were traditionally said to have killed Shaka because of his increase in brutal behaviour after the death of his mother Nandi. The assassination took place at present-day Stanger.[2] 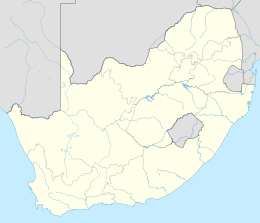 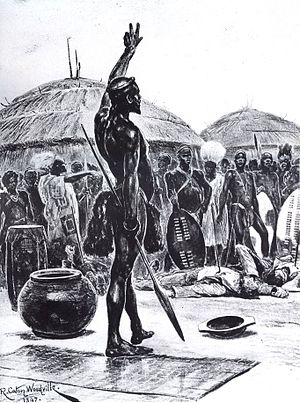 Dingane orders the killing of Piet Retief's party of Voortrekkers (portraying their deaths in the kraal; in fact they were killed on the execution hill)

Dingane built his capital city of UmGungundlovu in 1829 and enlarged it five years later. UmGungundlovu was built according to the characteristic layout of a Zulu military settlement (singular: ikhanda, plural: amakhanda). The ikhanda consisted of a large, central circular parade ground (isibaya esikhulu), surrounded by warriors' barracks (uhlangoti) and storage huts for their shields.[3] The isibaya was entered from the north.

The royal enclosure (isigodlo) was situated on the southern side of the complex, directly opposite the main entrance. The king, his mistresses and female attendants (Dingane never married officially), a total of at least 500 people, resided here. The women were divided into two groups, namely the black isigodlo and the white isigodlo. The black isigodlo comprised about 100 privileged women, and within that group another elite called the bheje, a smaller number of girls, favoured by the king as his mistresses. A small settlement was built for them behind the main complex where they could enjoy some privacy. The remainder of the king's women were called the white isigodlo. These consisted mainly of girls presented to the king by his important subjects. He also selected other girls at the annual First fruit ceremony (umkhosi wokweshwama).

A huge half-moon shaped area was included in the black isigodlo; here the women and the king sang and danced. The huts in the black isigodlo were divided into compartments of about three huts each, enclosed by a two-metre-high hedge of intertwined withes, which created a network of passages.[4]

The king's private hut (ilawu) was located in one such triangular compartment and had three or four entrances.[4] His hut was very large and was kept very neat by attendants; it could easily accommodate 50 people. Modern archaeological excavations have revealed that the floor of this large hut was approximately 10 metres in diameter. Archaeologists found evidence inside the hut of 22 large supporting posts completely covered in glass beads.[3] These had been noted in historical accounts by Piet Retief, leader of the Voortrekkers, and the British missionaries Champion and Owen.

On the south side, just behind the main complex, were three separate enclosed groups of huts. The centre group was used by the uBheje women of the black isigodlo. In this area, they initiated chosen young girls into the service of the king.

Some modern historians[who?] have assessed Dingane as the king responsible for the decline of the Zulu military superiority in southern Africa. He was a popular leader among the people and came into power at a challenging time. The fall of the Zulu kingdom to the European colonists might have occurred even under Shaka's rule.[citation needed] Numerous ethnic European colonists were entering the area from the Cape Colony, and they possessed guns and weaponry far superior to the Zulu spear.

Dingane lacked Shaka's military and leadership skills; rebel chiefs broke away from his rule. Their dissension was exacerbated by armed conflict with the newly arrived Voortrekkers.

In November 1837 Dingane met with Piet Retief, leader of the Voortrekkers. In return for their recovering some stolen cattle, Dingane signed a deed of cession of lands (written in English) to the Voortrekkers. It is generally believed that Dingane knew what he was signing, although he could not have had any formal education, and could not have read the contents of the document, nor could he have understood the concept of permanent land ownership, since it was not a custom of the Zulus to permanently assign land to individuals.[5] On 6 February 1838, after two days of feasting, the chief had Retief and his diplomatic party killed.[6] They had been told to leave their firearms outside the royal kraal. Suddenly, when the dancing had reached a frenzied climax, King Dingane leapt to his feet and shouted Bambani aba thakathi! (Catch the wizards!). The men were totally overpowered and dragged away to a hill called kwaMatiwane, named after a chief who had been killed there. Retief and his men were savagely butchered to death. It is alleged by some that the reason why they were killed was that they withheld some of the cattle recovered from Chief Sekonyela. The general opinion is that Dingane did not wish to yield the land ceded to them in the treaty and mistrusted the presence of the Voortrekkers.[7] At the same time, Dingane's forces massacred Retief's undefended trek party, about 500 Boers and native servants, including women and children. The Boers called this the Weenen massacre. The nearby present-day town of Weenen (Dutch for "weeping") was named by early settlers in memory of the massacre.

In a further act of war, Dingane ordered his army also to seek and kill the group of Voortrekkers under Andries Pretorius. The Zulu impis attacked the Voortrekker encampment, but they were crushingly defeated in the ensuing Battle of Blood River. An estimated 3,000 Zulus were killed, while three Voortrekkers were slightly wounded. Dingane's commander at the battle was Ndlela kaSompisi.

In January 1840, Pretorius and a force of 400 Boers helped Mpande in his revolt against Dingane, which resulted in the latter's overthrow and death. At the Battle of Maqongqo many of Dingane's own men deserted to Mpande's army. Dingane had his general Ndlela kaSompisi executed, and with a few followers he sought refuge in Nayawo territory on the Lubombo mountains. A group of Nyawo and Swazi assassinated him in Hlatikhulu Forest.[8]

He was succeeded as king by Mpande, who was half-brother to both Dingane and Shaka. Dingane's grave is in near Ingwavuma in the Hlatikulu Forest - an hour's drive from Tembe elephant park.

Sir Henry Rider Haggard's novels Nada the Lily and Marie include versions of some events in Dingane's life, as does Bertram Mitford's 1898 novel The Induna's Wife.