Israfil Maharram oglu Mamedov (or Mammadov, Azerbaijani: İsrafil Məhərrəm oğlu Məmmədov, Azeri Cyrillic: Исрафил Məhəррəм oғлу Мəммəдов, Russian: Исрафил Магеррам оглы Мамедов; May 30, 1919, Çaparlı settlement, Shamkir— May 5, 1946) was an Azeri military commander (junior-lieutenant and senior sergeant) and the assistant commander of a platoon commander of the Soviet 42nd Infantry Regiment during the Soviet-German War. He was the first Azerbaijani to be awarded the title of Hero of the Soviet Union, on December 11, 1941. 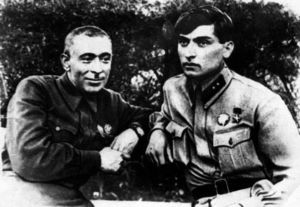 In 1939 Mamedov voluntarily joined the Red Army. In 1941 he was sent to study in the Younger Commanders School. After successfully finishing a six-month course, he received the rank of Senior Sergeant and led some military operations on the North-West Front. His unit became famous after the Battle of Moscow on December 3, 1941. He led 20 soldiers in defending the command post and communication line near Pustynka settlement in the Novgorod Oblast. After the artillery preparation the Germans commenced a new attack, assuming that the Soviet forces were weakened. Understanding their strategy, Mamedov ordered his troops to hold fire, allowing the enemy to get within 10–15 meters. After three German assaults, he launched a counter-attack with bayonets. The Germans lost over 300 soldiers and retreated. Mamedov personally killed approximately 70 enemy troops, including three officers. He was also awarded the Order of Lenin and the Gold Star on the battlefield.

A street in Ganja was named after Mamedov, and a museum and monument were built in the same place.