Sir Jacob Epstein KBE (10 November 1880 – 21 August 1959) was an American-British sculptor who helped pioneer modern sculpture.[1][2][3][4] He was born in the United States, and moved to Europe in 1902, becoming a British subject in 1911. He often produced controversial works which challenged ideas on what was appropriate subject matter for public artworks. He also made paintings and drawings, and often exhibited his work.[5]

Epstein's parents, Max and Mary Epstein,[6] were Polish Jewish refugees,[7][8] living on New York's Lower East Side. His family was middle-class, and he was the third of five children. His interest in drawing came from long periods of illness; as a child he suffered from pleurisy.

He studied art in his native New York as a teenager, sketching the city, and joined the Art Students League of New York in 1900. For his livelihood, he worked in a bronze foundry by day, studying drawing and sculptural modelling at night. Epstein's first major commission was to illustrate Hutchins Hapgood's 1902 book Spirit of the Ghetto. Epstein used the money from the commission to move to Paris.

Moving to Europe in 1902, he studied in Paris at the Académie Julian and the École des Beaux-Arts. He settled in London in 1905 and married Margaret Dunlop in 1906.[9] Epstein became a British subject on 4 January 1911.[10] Many of Epstein's works were sculpted at his two cottages in Loughton, Essex, where he lived first at number 49 then 50, Baldwin's Hill (there is a blue plaque on number 50). He served briefly in the 38th Battalion of the Royal Fusiliers, known as the Jewish Legion during World War I; following a breakdown, he was discharged in 1918 without having left England.

In London, Epstein involved himself with a bohemian and artistic crowd. Revolting against ornate, pretty art, he made bold, often harsh and massive forms of bronze or stone. His sculpture is distinguished by its vigorous rough-hewn realism. Avant-garde in concept and style, his works often shocked his audience. This was not only a result of their (often explicit) sexual content, but also because they deliberately abandoned the conventions of classical Greek sculpture favoured by European Academic sculptors to experiment instead with the aesthetics of art traditions as diverse as those of India, West Africa, and the Pacific Islands.[11] People in Liverpool, however, nicknamed his nude male sculpture over the door of Lewis's department store "Dickie Lewis". Such factors may have focused disproportionate attention on certain aspects of Epstein's long and productive career, throughout which he aroused hostility, especially challenging taboos surrounding the depiction of sexuality. 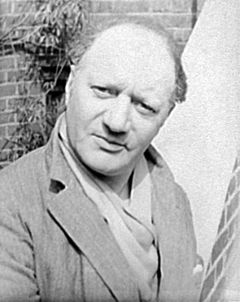 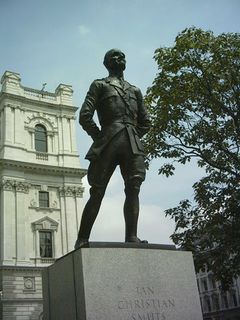 London was not ready for Epstein's first major commission – 18 large nude sculptures made in 1908 for the façade of Charles Holden's building for the British Medical Association on The Strand (now Zimbabwe House) were initially considered shocking to Edwardian sensibilities, again mainly due to the perception that they were sexually over-explicit. In art-historical terms, however, the Strand sculptures were controversial for quite a different reason: they represented Epstein's first thoroughgoing attempt to break away from traditional European iconography in favour of elements derived from an alternative sculptural milieu – that of classical India. The female figures in particular may be seen deliberately to incorporate the posture and hand gestures of Buddhist, Jain and Hindu art from the subcontinent in no uncertain terms.[12][13] The current, mutilated condition of many of the sculptures is also not entirely connected with prudish censorship; the damage was caused in the 1930s when possibly dangerous projecting features were hacked off after pieces fell from one of the statues.

One of the most famous of Epstein's early commissions is Oscar Wilde's tomb in Père Lachaise Cemetery, Paris, "which was condemned as indecent and at one point was covered in tarpaulin by the French police."[14] 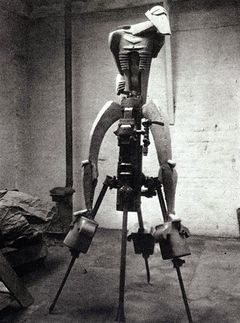 Epstein's 1913 sculpture The Rock Drill in its original form. It is now lost.

Between 1913 and 1915, Epstein was associated with the short-lived Vorticism movement and produced one of his best known sculptures The Rock Drill.

In 1915, John Quinn, wealthy American collector and patron to the modernists, bought some Epstein sculptures to add to his private collection.[15]

In 1916, Epstein was commissioned by Viscount Tredegar to produce a bronze head of Newport poet W. H. Davies. The bronze, regarded by many as the most accurate artistic impression of Davies and a copy of which Davies owned himself, may be found at Newport Museum and Art Gallery[16]

In 1928, Epstein sculpted the head of the popular singer and film star Paul Robeson. A commission from Holden for the new headquarters building of the London Electric Railway generated another controversy in 1929. His nude sculptures Day and Night above the entrances of 55 Broadway were again considered indecent and a debate raged for some time regarding demands to remove the offending statues which had been carved in-situ. Eventually a compromise was reached to modify the smaller of the two figures represented on Day. But the controversy affected his commissions for public work which dried up until World War II.

Between the late 1930s and the mid-1950s, numerous works by Epstein were exhibited in Blackpool. Adam, Consummatum Est, Jacob and the Angel and Genesis, and other works, were initially displayed in an old drapery shop surrounded by red velvet curtains. The crowds were ushered in at the cost of a shilling by a barker on the street. After a small tour of American fun fairs, the works were returned to Blackpool and were exhibited in the anatomical curiosities section of Louis Tussaud's waxworks. The works were displayed alongside dancing marionettes, diseased body parts and conjoined ("Siamese") twin babies in jars. Placing Epstein within the context of freakish curiosity perhaps added to Epstein's decision not to create further large-scale direct carvings.

St Michael's Victory over the Devil (1958), on the new Coventry Cathedral

Bronze portrait sculpture formed one of Epstein's staple products, and perhaps the best known. These sculptures were often executed with roughly textured surfaces, expressively manipulating small surface planes and facial details. Some fine examples are in the National Portrait Gallery. Another example is the bust of the Arsenal manager Herbert Chapman that sat in the marble halls of Highbury for many years before being moved to the new Emirates Stadium.

During the Second World War, Epstein was asked to undertake six commissions for the War Artists' Advisory Committee. After completing bronze busts of Admiral of the Fleet Sir Andrew Cunningham, General Sir Alan Cunningham, and Air Marshal Sir Charles Portal - and Ernest Bevin, Epstein accepted a commission to create busts of John Anderson and Winston Churchill. He completed a bust of Winston Churchill in early 1947.

Epstein's aluminium figure of Christ in Majesty (1954–55), is suspended above the nave in Llandaff Cathedral, Cardiff, on a concrete arch designed by George Pace.

His larger sculptures were his most expressive and experimental, but also his most vulnerable. His depiction of Rima, one of author W. H. Hudson's most famous characters, graces a serene enclosure in Hyde Park. Even here, a visitor became so outraged as to defile it with paint. He was one of 250 sculptors who exhibited in the 3rd Sculpture International, which was organised by the Fairmount Park Association (now the Association for Public Art) and held at the Philadelphia Museum of Art in the summer of 1949.

Epstein would often sculpt the images of friends, casual acquaintances, and even people dragged from the street into his studio almost at random. He worked even on his dying day. He also painted; many of his watercolours and gouaches were of Epping Forest, where he lived (at Loughton) and sculpted. These were often exhibited at the Leicester Galleries in London. His Monkwood Autumn and Pool, Epping Forest date from 1944–45.

Epstein was Jewish,[17][18][19][20] and negative reviews of his work sometimes took on an antisemitic flavour, though he did not attribute the "average unfavorable criticism" of his work to antisemitism.[21]

Epstein met Albert Einstein at Roughton Heath, Norfolk, in 1933 and had three sittings for a bust. He remembered his meeting with Einstein as, "His glance contained a mixture of the humane, the humorous and the profound. This was a combination which delighted me. He resembled the ageing Rembrandt."[22] 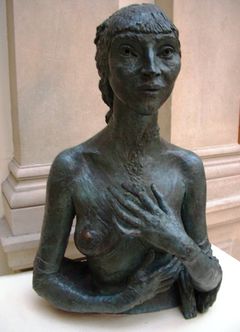 Kathleen, in the Bristol City Museum and Art Gallery

Despite being married to and continuing to live with Margaret, Epstein had a number of relationships with other women that brought him his five children: Peggy Jean (1918-2010), Theo (1924–1954), Kathleen (1926–2011), Esther (1929–1954) and Jackie (1934–2009).[23] Margaret generally tolerated these relationships – even to the extent of bringing up his first and last children. In 1921, Epstein began the longest of these relationships, with Kathleen Garman, one of the Garman sisters,[24] mother of his three middle children, which continued until his death. Margaret "tolerated Epstein's infidelities, allowed his models and lovers to live in the family home and raised Epstein's first child, Peggy Jean, who was the daughter of Meum Lindsell, one of Epstein's previous lovers. Evidently, Margaret's tolerance did not extend to Epstein's relationship with Kathleen Garman, as in 1923 Margaret shot and wounded Kathleen in the shoulder."[14]

Margaret Epstein died in 1947, and after Epstein was appointed a Knight Commander of the Order of the British Empire in the 1954 New Year Honours,[25] he married Kathleen Garman in 1955.

Their eldest daughter, also named Kathleen but known as "Kitty", married painter Lucian Freud in 1948 and was mother of his daughters Annie and Annabel. She is the subject of the painting Portrait of Kitty. In 1953 they divorced. She married a second time in 1955, to economist Wynne Godley.[26] They have one daughter.[26] 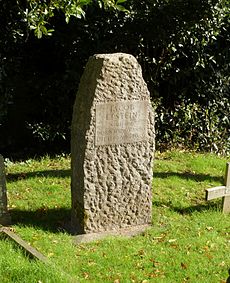 The Garman Ryan Collection, including several works by Epstein, was donated to the people of Walsall, by Lady Epstein in 1973. It is on display at The New Art Gallery Walsall.[29]

His art is displayed all over the world; highly original for its time, its influence on the younger generation of sculptors such as Henry Moore[30][31] and Barbara Hepworth[32] was significant. According to June Rose, in her biography, Moore was befriended by the older sculptor during the early 1920s and visited Epstein in his studio. Epstein, along with Moore and Hepworth, all expressed a deep fascination with the non-western art from the British Museum.

In March 2000 the Epstein Estate appointed Tate Images as the Copyright Agent for all permissions clearance.

Below is a brief overview of key texts relating to Epstein: