Les Huguenots (French pronunciation: ​[le ˈyg(ə)no])[1] is a French opera by Giacomo Meyerbeer, one of the most popular and spectacular examples of the style of grand opera. In five acts, to a libretto by Eugène Scribe and Émile Deschamps, it premiered in Paris in 1836.

Les Huguenots was some five years in creation. Meyerbeer prepared carefully for this opera after the sensational success of Robert le diable, recognising the need to continue to present lavish staging, a highly (melo)dramatic storyline, impressive orchestration and virtuoso parts for the soloists – the essential elements of the new genre of Grand Opera. Coming from a wealthy family, Meyerbeer could afford to take his time, dictate his own terms, and to be a perfectionist. The very detailed contract which Meyerbeer arranged with Louis-Désiré Véron, director of the Opéra, for Les Huguenots (and which was drawn up for him by the lawyer Adolphe Crémieux) is a testament to this.[2] While Meyerbeer was writing the opera, another opera with a similar setting and theme (Le pré aux clercs by Ferdinand Hérold) was also produced in Paris (1832). Like Meyerbeer's, Hérold's work was extremely popular in its time, although it is now forgotten.

Les Huguenots premiered at the Paris Opera on 29 February 1836 (conductor: François Habeneck), and was an immediate success. Both Adolphe Nourrit and Cornélie Falcon were particularly praised by the critics for their singing and performances. It was indeed Falcon's last important creation before her voice so tragically failed in April of the following year.[3] Hector Berlioz called the score "a musical encyclopaedia". Les Huguenots was the first opera to be performed at the Opéra more than 1,000 times (the 1,000th performance being on 16 May 1906)[4] and continued to be produced regularly up to 1936, more than a century after its premiere.[5] Its many performances in all other of the world's major opera houses give it a claim to being the most successful opera of the 19th century.

Other first performances included London (Covent Garden Theatre), 20 June 1842, and New Orleans (Théâtre d'Orléans) on 29 April 1839. Due to its subject matter it was sometimes staged under different titles such as The Guelfs and the Ghibellines (in Vienna before 1848), Renato di Croenwald in Rome, or The Anglicans and the Puritans (in Munich), to avoid inflaming religious tensions among its audiences.[6]

Les Huguenots was chosen to open the present building of the Covent Garden Theatre in 1858. During the 1890s, when it was performed at the Metropolitan Opera, it was often called 'the night of the seven stars', as the cast would include Lillian Nordica, Nellie Melba, Sofia Scalchi, Jean de Reszke, Édouard de Reszke, Victor Maurel and Pol Plançon.

In the Soviet Union, the opera was given a new libretto as Dekabristi, about the historical Decembrists. [7]

The critic Arthur Elson wrote in 1901, "Les Huguenots contains many passages of supreme beauty. Marcel's powerful battle song ("Piff Paff"), the bright gaiety of the garden scene, the "Rataplan" of the Huguenot soldiers, and the impressive "Benediction of the Poignards" are made of truly dramatic material, while Raoul's farewell to Valentine affords a climax that remains undimmed by the lapse of years."[8] But like others of Meyerbeer's operas, Les Huguenots lost favor in the early part of the twentieth century and it no longer forms part of the standard operatic repertoire.

One reason for the lack of revivals is cost. Another is the extraordinary difficulty in casting the work. Les Huguenots has seven leading roles—two sopranos, one mezzo-soprano, two baritones, a tenor, and a bass. Moreover, the tenor part, Raoul, is one of the most taxing in all of opera. He is on stage for large sections of all five acts and his music is filled with extremely difficult high notes. Certainly, there is lack of modern-day virtuoso singers capable of performing Meyerbeer's operas with the sort of grace, stamina and technical panache that they need to have lavished upon them, if the composer's musical intentions are to be fully realised.

Dame Joan Sutherland and Richard Bonynge were the major force in the opera's revival during the second half of the 20th century. Sutherland chose the opera for her final performance at the Sydney Opera House on 2 October 1990, Bonynge conducting the Opera Australia Orchestra.

A new production opened at the Staatstheater Nürnberg in 2014, conducted by Guido Johannes Rumstadt with stage direction by Tobias Kratzer, a co-production with Opéra de Nice.[10]

The story culminates in the historical St. Bartholomew's Day Massacre in 1572 in which thousands of French Huguenots (Protestants) were slaughtered by Catholics in an effort to rid France of Protestant influence. Although the massacre was a historical event, the rest of the action, which primarily concerns the love between the Catholic Valentine and the Protestant Raoul, is wholly a creation of Scribe.

The chateau of the Count

File:Meyerbeer Huguenots ActI maquette AugusteRubéPhilippeChaperon.jpg
Set design by Auguste Rubé and Philippe Chaperon for Act 1 of the 1875 production at the Palais Garnier

A short orchestral prelude, featuring the Lutheran chorale Ein feste Burg, replaces the extended overture Meyerbeer originally intended for the opera. The Catholic Count of Nevers is entertaining his fellow noblemen. They await the arrival of Raoul, and are surprised to hear that this emissary of the Court is a Huguenot. After a drinking song at Raoul's entry, the newcomer is prevailed upon to give a tale of love. Raoul tells of an unknown beauty he has rescued and fallen in love with. (With a daring and unusual stroke of orchestration, Meyerbeer accompanies this aria with a solo viola d'amore). Raoul's Protestant servant Marcel is shocked to see his master in such wicked company and sings a hearty Protestant prayer (to the tune of 'Ein feste Burg'). He then sings a Huguenot battle song from the siege of La Rochelle, Pif, paf.

The arrival of a mysterious lady stranger to speak to Nevers (off stage) interrupts the proceedings. Raoul recognises her as his mysterious beauty. In fact she is Nevers' intended bride, Valentine (daughter of St. Bris), instructed by the Queen to break off her engagement. The page Urbain enters with a secret message for Raoul, daring him to come blindfolded to a secret rendezvous.

The gardens at the Château de Chenonceaux

Queen Marguerite looks into a mirror held by her enamoured page Urbain, and sings the virtuoso pastorale, O beau pays de la Touraine. Valentine enters and reports that Nevers has agreed to break the engagement. Marguerite's entourage of ladies enter dressed for bathing. This leads to a ballet. Raoul enters blindfolded and the ladies tease him. With his sight restored, the Queen orders Raoul to marry Valentine to cement relations between the Protestant and Catholic factions. In a complex final ensemble, while a chorus of nobles swears friendship, Raoul, who believes Valentine is the mistress of Nevers, refuses to comply with the Queen's command. The nobles then swear revenge, and Marcel reproaches Raoul for mixing with Catholics.

Paris, the 'Pré aux clercs' on the left bank of the Seine, at sunset

The act opens with extensive scene setting of citizens, soldiers, church-goers and gypsies. Valentine has just married Nevers, but remains in the chapel to pray. Marcel delivers a challenge from Raoul. Saint-Bris decides to attack Raoul, but is overheard by Valentine. The town crier declares curfew (the scene anticipating a similar one in Wagner's Die Meistersinger). Valentine, in disguise, tells Marcel of the plot against Raoul. The duel is interrupted by rival factions of Protestant and Catholic students, and only the arrival of the Queen stems the chaos. Raoul realises that Valentine has saved him and that his suspicions of her were unfounded. However, now she is wedded to his enemy. Nevers leads her away in a splendid procession.

A room in Nevers' Parisian town-house

Valentine, alone, is surprised by Raoul who wishes to have one last meeting with her. The sound of approaching people leads Raoul to hide behind a curtain, where he hears the Catholic nobles, accompanied by three monks, who bless their swords, pledge to murder the Huguenots. Only Nevers does not join in the oath. This scene is generally judged the most gripping in the opera, and is accompanied by some of its most dramatic music. When the nobles have departed, Raoul is torn between warning his fellows and staying with Valentine, but finally duty triumphs over love. Valentine faints as Raoul makes his escape. 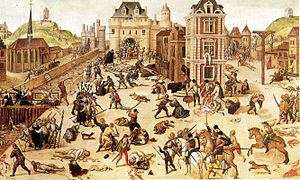 Painting by François Dubois, a Huguenot painter, of the Massacre of St. Bartholomew's Day

The Protestants are celebrating the marriage of the Queen to Henry of Navarre. The tolling of a bell interrupts the proceeding, as does the entrance of Raoul, who informs the assembly that the second stroke was the signal for the Catholic massacre of the Huguenots.

Scene 2: A cemetery: in the background, a ruined Protestant church

Nevers dies protecting Marcel, who is wounded; Valentine agrees to become a Protestant to marry Raoul and Marcel carries out the nuptials. A 'chorus of murderers' shoots all three, after they express their vision of heaven, 'with six harps'.[16] Wounded, they are finally murdered by St. Bris and his men, he realising only too late that he has killed his own daughter. (Cf. the closing scene of Fromental Halévy's opera, La Juive, libretto also by Scribe, produced a year earlier than Les Huguenots). The entrance of the Queen, and the chorus of soldiers singing 'God wants blood!', brings the opera to a close. 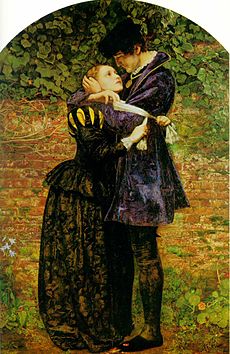 John Everett Millais, A Huguenot, on St. Bartholomew's Day, Refusing to Shield Himself from Danger by Wearing the Roman Catholic Badge (1852)

Following five years after Meyerbeer's own Robert le diable and a year after Fromental Halévy's La Juive, Les Huguenots consolidated the genre of Grand Opera, in which the Paris Opéra would specialise for the next generation, and which became a major box-office attraction for opera houses all over the world. Hector Berlioz's contemporary account is full of praise, with 'Meyerbeer in command at the first desk [of violins] […] from beginning to end I found [the orchestral playing] superb in its beauty and refinement […] The richness of texture in the Pré-aux-Clercs scene [of act III] […] was extraordinary, yet the ear could follow it with such ease that every strand in the composer's complex thought was continually apparent – a marvel of dramatic counterpoint'.[17] The immense success of the opera encouraged many musicians, including Franz Liszt and Sigismond Thalberg, to create virtuosic piano works based on its themes.

A military slow march based on the prelude to Les Huguenots is played every year during the ceremony of Trooping the Colour at Horse Guards Parade in London.[18]

There are over 20 complete (or nearly complete) recordings of Les Huguenots, four of them videos. In addition,several late 19th-century singers versed in the genuine Meyerbeerian performance style made acoustic gramophone recordings of arias from Les Huguenots. Many of these early recordings have been remastered and reissued on CD recitals.