In addition to borrowing print books, books on CD, videos, DVDs and music CDs, library card holders are able to download free audiobooks and ebooks via the library's website.

London Mechanics’ Institute was one of a series of Mechanic's Institutes 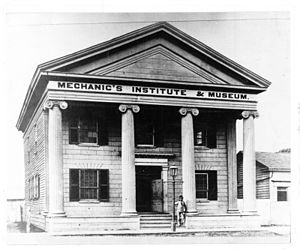 The Mechanics Institute in London,Ontario circa. 1860-1877

that were set up around the world after becoming popular in Britain. It housed a subscription library that allowed members who paid a fee to borrow books. The Mechanic's Institutes libraries eventually became public libraries when the establishment of free libraries occurred.[1]

The London Public Library opened in November 1896. The present-day Central Library was built in a remodeled space that formerly housed a Bay outlet. The Central library opened in this location on August 25, 2002. This not only allowed for an economical expansion of the branch but also offered the library a more central location in the city's downtown core. Additional outside donations enabled the construction of the Wolf Performance Hall, a concert hall which hosts music and theatre performances. The Central Library is also home to the Reading Garden which is equipped with seating and multiple water features. Susanna Hubbard Krimmer is currently the 11th CEO of the London Public Library and only the second woman to hold that position.

The London Public Library now has 16 branches open to the public. The branches are:

Northridge branch closed in June 2010 after 38 years of service.

The Landon Branch Library is home to a collection of stained glass windows that incorporate poetry by local artists. These were created by artist Ted Gooden.

In 2011, two weeks after the Western Fair District denied The Everything to do with Sex Show a lease to their Progress Building,[2] three organisations, (Men Against Sexual Trafficking, the London Abused Women's Centre, and Stop Porn Culture), appeared before the Community and Neighbourhoods Committee of the London City Council to ask the London Public Library to stop pornography from being viewable on public computers and to ask the city to ban pornography-industry organisations from holding events in city-funded venues.[3] The committee did not allow these three organisations' presentation to be on the public agenda; only the committee members saw the presentation.[4] The presentation convinced the committee to support the two proposed courses of action.[5] Mental health professional Dan Lenart opposed the proposal to put content-control software on computers in public libraries, calling the software an "attack on the poor and impoverished".[6]