Embryology (from Greek ἔμβρυον, embryon, "the unborn, embryo"; and -λογία, -logia) is the branch of biology that studies the development of gametes (sex cells), fertilization, and development of embryos and fetuses. Additionally, embryology is the study of congenital disorders that occur before birth.[1]

After cleavage, the dividing cells, or morula, becomes a hollow ball, or blastula, which develops a hole or pore at one end.

In bilateral animals, the blastula develops in one of two ways that divides the whole animal kingdom into two halves (see: Embryological origins of the mouth and anus). If in the blastula the first pore (blastopore) becomes the mouth of the animal, it is a protostome; if the first pore becomes the anus then it is a deuterostome. The protostomes include most invertebrate animals, such as insects, worms and molluscs, while the deuterostomes include the vertebrates. In due course, the blastula changes into a more differentiated structure called the gastrula.

The gastrula with its blastopore soon develops three distinct layers of cells (the germ layers) from which all the bodily organs and tissues then develop:

Embryos in many species often appear similar to one another in early developmental stages. The reason for this similarity is because species have a shared evolutionary history. These similarities among species are called homologous structures, which are structures that have the same or similar function and mechanism, having evolved from a common ancestor. 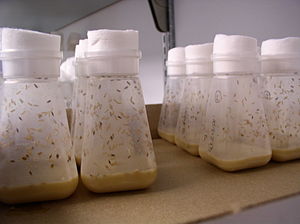 Figure 1.1.1B Drosophila melanogaster larvae contained in lab apparatus to be used for experiments in genetics and embryology.

Click here to read the main article on Drosophila embryogenesis

Drosophila melanogaster, a fruit fly, is a model organism in biology on which much research into embryology has been done (see figure 1.1.1A and figure 1.1.1B).[2] Before fertilization, the female gamete produces an abundance of mRNA - transcribed from the genes that encode bicoid protein and nanos protein.[3][4] These mRNA molecules are stored to be used later in what will become a developing embryo. The male and female Drosophila gametes exhibit anisogamy (differences in morphology and sub-cellular biochemistry). The female gamete is larger than the male gamete because it harbors more cytoplasm and, within the cytoplasm, the female gamete contains an abundance of the mRNA previously mentioned.[5][6] At fertilization, the male and female gametes fuse (plasmogamy) and then the nucleus of the male gamete fuses with the nucleus of the female gamete (karyogamy). Note that before the gametes' nuclei fuse, they are known as pronuclei.[7] A series of nuclear divisions will occur without cytokinesis (division of the cell) in the zygote to form a multi-nucleated cell (a cell containing multiple nuclei) known as a syncytium.[8][9] All the nuclei in the syncytium are identical, just as all the nuclei in every somatic cell of any multicellular organism are identical in terms of the DNA sequence of the genome.[10] Before the nuclei can differentiate in transcriptional activity, the embryo (syncytium) must be divided into segments. In each segment, a unique set of regulatory proteins will cause specific genes in the nuclei to be transcribed. The resulting combination of proteins will transform clusters of cells into early embryo tissues that will each develop into multiple fetal and adult tissues later in development (note: this happens after each nucleus becomes wrapped with its own cell membrane).

Outlined below is the process that leads to cell and tissue differentiation.

Humans are bilaterals and deuterostomes.

As recently as the 18th century, the prevailing notion in western human embryology was preformation: the idea that semen contains an embryo – a preformed, miniature infant, or homunculus – that simply becomes larger during development. The competing explanation of embryonic development was epigenesis, originally proposed 2,000 years earlier by Aristotle. Much early embryology came from the work of the Italian anatomists Aldrovandi, Aranzio, Leonardo da Vinci, Marcello Malpighi, Gabriele Falloppio, Girolamo Cardano, Emilio Parisano, Fortunio Liceti, Stefano Lorenzini, Spallanzani, Enrico Sertoli, and Mauro Rusconi.[22] According to epigenesis, the form of an animal emerges gradually from a relatively formless egg. As microscopy improved during the 19th century, biologists could see that embryos took shape in a series of progressive steps, and epigenesis displaced preformation as the favoured explanation among embryologists.[23] 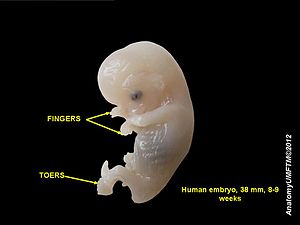 After the 1950s, with the DNA helical structure being unravelled and the increasing knowledge in the field of molecular biology, developmental biology emerged as a field of study which attempts to correlate the genes with morphological change, and so tries to determine which genes are responsible for each morphological change that takes place in an embryo, and how these genes are regulated.

Currently, embryology has become an important research area for studying the genetic control of the development process (e.g. morphogens), its link to cell signalling, its importance for the study of certain diseases and mutations, and in links to stem cell research.