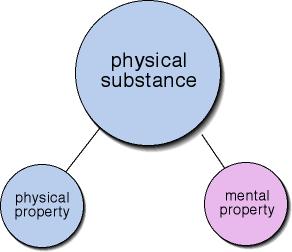 Property dualism describes a category of positions in the philosophy of mind which hold that, although the world is constituted of just one kind of substance — the physical kind — there exist two distinct kinds of properties: physical properties and mental properties. In other words, it is the view that non-physical, mental properties (such as beliefs, desires and emotions) inhere in some physical substances (namely brains).

Substance dualism, on the other hand, is the view that there exist two kinds of substance: physical and non-physical (the mind), and subsequently also two kinds of properties which adhere in those respective substances.

Emergentism is the idea that increasingly complex structures in the world give rise to the "emergence" of new properties that are something over and above (i.e. cannot be reduced to) their more basic constituents. The concept of emergence dates back to the late 19th century. John Stuart Mill notably argued for an emergentist conception of science in his 1843 System of Logic.

Applied to the mind/body relation, emergent materialism is another way of describing the non-reductive physicalist conception of the mind that asserts that when matter is organized in the appropriate way (i.e., organized in the way that living human bodies are organized), mental properties emerge.

Most contemporary non-reductive physicalists subscribe to a position called anomalous monism (or something very similar to it). Unlike epiphenomenalism, which renders mental properties causally redundant, anomalous monists believe that mental properties make a causal difference to the world. The position was originally put forward by Donald Davidson in his 1970 paper Mental Events, which stakes an identity claim between mental and physical tokens based on the notion of supervenience.

Another argument for non-reductive physicalism has been expressed by John Searle, who is the advocate of a distinctive form of physicalism he calls biological naturalism. His view is that although mental states are not ontologically reducible to physical states, they are causally reducible (see causality). He believes the mental will ultimately be explained through neuroscience. This world view does not necessarily fall under property dualism, and therefore does not necessarily make him a "property dualist". He has acknowledged that "to many people" his views and those of property dualists look a lot alike. But he thinks the comparison is misleading.[1]

Epiphenomenalism is a doctrine about mental-physical causal relations, which holds that one or more mental states and their properties are the byproducts (or epiphenomena) of the states of a closed physical system, and are not causally reducible to physical states (do not have any influence on physical states). According to this view mental properties are as such real constituents of the world, but they are causally impotent; while physical causes give rise to mental properties like sensations, volition, ideas, etc., such mental phenomena themselves cause nothing further - they are causal dead ends.

The position is credited to English biologist Thomas Huxley (Huxley 1874), who analogised mental properties to the whistle on a steam locomotive. The position found favour amongst scientific behaviourists over the next few decades, until behaviourism itself fell to the cognitive revolution in the 1960s. Recently, epiphenomenalism has gained popularity with those struggling to reconcile non-reductive physicalism and mental causation.

Panpsychism is the view that all matter has a mental aspect, or, alternatively, all objects have a unified center of experience or point of view. Superficially, it seems to be a form of property dualism, since it regards everything as having both mental and physical properties. However, some panpsychists say mechanical behaviour is derived from primitive mentality of atoms and molecules — as are sophisticated mentality and organic behaviour, the difference being attributed to the presence or absence of complex structure in a compound object. So long as the reduction of non-mental properties to mental ones is in place, panpsychism is not strictly a form of property dualism; otherwise it is.