From Infogalactic: the planetary knowledge core
Jump to: navigation, search
This article is about the World War II espionage organisation. For other uses, see Red Orchestra (disambiguation) and Rote Kapelle (disambiguation).

The Red Orchestra (German: Die Rote Kapelle) was the name given by the Gestapo to an anti-Nazi resistance movement in Berlin, as well as to Soviet espionage rings operating in German-occupied Europe and Switzerland during World War II.

The term 'Red Orchestra' was coined by the Reichssicherheitshauptamt (RSHA), the counter-espionage arm of the SS, which referred to resistance radio operators as 'pianists', their transmitters as 'pianos', and their supervisors as 'conductors'.[1] Compare Schwarze Kapelle (Black Orchestra), coined by the Gestapo for a different group.

The RSHA included three independent espionage networks in the "Red Orchestra": the Trepper group in Germany, France, and Belgium, the Lucy spy ring (German: rote Drei) in Switzerland , and the Schulze-Boysen/Harnack group in Berlin.

The Lucy ring included British spy (either a double-agent or, more likely, an accepted liaison officer) Alexander Foote, who later wrote about his role in his memoirs (Handbook for Spies).

In 1942 the RSHA established the Red Orchestra Special Detachment (German: Sonderkommando Rote Kapelle). It included representatives of the Gestapo, Abwehr, and the SD.[1]

Leopold Trepper was an agent of the GRU. In early 1939, he was sent to Brussels, posing as a Canadian industrialist, to establish a commercial cover for a spy network in France and the Low Countries. Trepper established the cover firm the "Foreign Excellent Raincoat Company" in Brussels, an export firm with branches in many major European ports. Following the fall of Belgium in May 1940, he moved to Paris and established the cover firms of Simex in Paris and Simexco in Brussels. Both companies sold black market goods to the Germans and made a profit doing so. Belgian-born socialite Suzanne Spaak joined the Trepper group in Paris after seeing the conduct of the Nazi occupiers in her country.

Trepper directed seven GRU networks in France, and the network steadily gathered military and industrial intelligence in Occupied Europe, including data on troop deployments, industrial production, raw material availability, aircraft production, and German tank designs. Trepper was also able to get important information through his contacts with highly placed Germans. Posing as a German businessman, he held dinner parties at which he acquired information on the morale and attitudes of German military figures, troop movements, and plans for the Eastern Front.

In addition, contacts between the Simex company and its main customer, the Todt Organization, provided information on German military fortifications and troop movements. As a further bonus, these contacts supplied some of Trepper's agents with passes that allowed them to move freely in German-occupied areas.

In December 1941, German security forces shut down Trepper's transmitter in Brussels. Trepper himself was arrested on 5 December 1942 in Paris.[2] He agreed to work for the Germans, and began transmitting disinformation to Moscow, which may have included hidden warnings. In September 1943 he escaped and went into hiding with the French Resistance.

Operations by the Trepper ring had been entirely eliminated by the spring of 1943. Most agents were executed, including Suzanne Spaak at Fresnes Prison, just thirteen days before the Liberation of Paris in 1944. Trepper himself survived the war.

On Tuesday, 6 December 2011, former MEP Mark F. Watts organised a commemorative event in the European Parliament hosted by Peter Skinner, a senior British MEP, to mark the 70th Anniversary of the raid by the German Abwehr on the Red Orchestra Brussels headquarters. The Red Orchestra was probably the most successful spy network in World War II. The raid led to the capture, torture, and execution of over 100 agents. The event included a seminar with historian Hans Coppi, Jr. an expert on the Red Orchestra whose parents were members and were executed by the Gestapo, Natalia Narochnitskaya Ph.D, Prof., a doctor of historical science, an expert on international relations around World War I and World War II, and a prominent public figure in Russia, Rabbi Avil Tawil, Director of the European Jewish Community Centre in Brussels, and Lital Levin, an Israeli journalist and relative of Leopold Trepper. Other experts and relatives of the Red Orchestra and the Resistance also contributed to the seminar. There was a commemorative reception. The Russian Ambassador to the EU, H.E. ru, was guest of honour. The British Ambassador to Belgium, H.E. Jonathan Brenton, the Israeli Ambassador to Belgium H.E. Jacques Revah, and the German Ambassador to Belgium H.E. de (Eckart Cuntz) attended.

The Schulze-Boysen/Harnack group in Berlin was formed by Harro Schulze-Boysen, a Luftwaffe staff officer, his wife Libertas, Arvid Harnack, a lawyer and economist, his American wife Mildred, and a number of sympathetic friends and acquaintances. 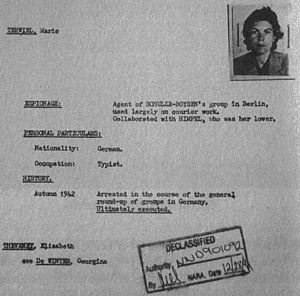 Schulze-Boysen had been active in opposition to the Nazis before Hitler took power, but then joined the Luftwaffe for "cover". In private, he continued to meet with other anti-Nazis, including Libertas, whom he married in 1936.

Harnack also had a circle of anti-Nazi associates. He joined the NSDAP in 1937 for "cover".

In 1939, the two groups made contact, and began to work together.

The combined group ran the gamut of German society, including Communists, political conservatives, Jews, devout Catholics, and atheists. Their ages ran from 16 to 86, and about 40% were women.

Among its leading members were theatrical producer Adam Kuckhoff and his wife Greta, pianist Helmut Roloff, secretary Ilse Stöbe, diplomat Rudolf von Scheliha, author Günther Weisenborn, potter Cato Bontjes van Beek, Horst Heilmann (an officer in the Cipher Section of OKH), and photojournalist John Graudenz (who had been expelled from the USSR for reporting on the Soviet famine of 1932–1933).

The group gathered intelligence from many sources. The group was not in contact with the USSR by radio.

For the remainder of 1941, the Schulze-Boysen/Harnack group gave most of its intelligence to the United States through the American embassy's monetary attaché, Donald Heath.[3]

However, these efforts to inform other governments about Nazi atrocities and war plans were only a small part of their resistance effort.

Their primary activity was the distribution of leaflets to incite civil disobedience and cause the Nazis to worry about subversion. They also printed and pasted up anti-Nazi stickers in large numbers, and they helped people in danger from the Nazis to escape the country via an Underground Railroad-like network.

The network began to unravel in 1942. The OKH Cipher Section decoded some of Trepper's radio traffic, and on 30 July 1942 the Gestapo arrested radio operator de (Johann Wenzel). Horst Heilmann tried to warn Schulze-Boysen, but the warning was not in time. Schulze-Boysen was arrested on 30 August, and Harnack on 3 September. The rest of the group was arrested within a few weeks, and many were executed.[1]

There was one part of the Red Orchestra which was outside the reach of German security forces: Die Roten Drei (Sender) (the Red Three (stations)") in Switzerland. It was headed by Alexander Radó (codename DORA), a Hungarian émigré, Communist, and geographer. The Roten Drei was founded in 1936, when Radó arrived in Geneva. By April 1942, the organization had been established with Radó as group leader, and also had three subgroup leaders: de (Rachel Dübendorfer) (codename SISSY), Georges Blun (LONG), and de (Otto Pünter) (PAKBO).[1] All told, an estimated 5,000+ messages were sent by the Rote Drei within the span of about 3 years.[4]

Some people have speculated that the Lucy ring was used by British intelligence to pass Ultra information to Soviet intelligence without revealing the codebreaking operation that was its source, but most historians don't agree with this theory.[5]

In 1944–1945, Radó was recalled to the USSR, and charged with spying for Britain and the U.S. He was imprisoned for eight years, but was released and rehabilitated after Stalin's death.