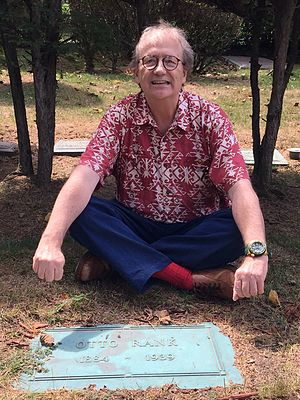 Professor and Philosopher Robert S. Corrington at the grave of Psychoanalyst Otto Rank

Robert S. Corrington (born May 30, 1950)[1] is an American philosopher and author of many books exploring human interpretation of the universe as well as biographies on C.S. Peirce and Wilhelm Reich. He is currently the Henry Anson Buttz Professor of Philosophical Theology at Drew University in Madison, New Jersey. Before that he was a professor at Pennsylvania State University.

Corrington is member of Unitarian Universalist Association and The Theosophical Society of America and a lecturer for both organizations, and he is also an affiliate of The Parapsychological Association. Corrington has had bouts with bipolar disorder (manic-depressive), and he gives a personal account of this in his 2003 book Riding the Windhorse: Manic Depressive Disorder and the Quest for Wholeness, which contains case studies of Sri Ramakrishna and Sir Isaac Newton as well as his intellectual biography "My Passage from Panentheism to Pantheism."

Robert S. Corrington’s work contributes to philosophical and theological inquiry through the development of a perspective called 'ecstatic naturalism’. Ecstatic naturalism, also referred to as ‘deep pantheism’ or ‘religious naturalism,’ has emerged through Corrington’s eleven books and over eighty articles on the subject. His influences are many and range across the disciplines of philosophy, theology, science, and psychology. Deep appreciation of the American philosophers Charles Sanders Peirce, William James, George Santayana, Justus Buchler and John Dewey grounds Corrington’s insights in a pragmatist mode even as his work creatively extends this tradition philosophically through a psychologically sophisticated semiotics with the aid of Carl Jung, Otto Rank, Heinz Kohut, and Julia Kristeva and theologically through liberal Protestant thinkers Friedrich Schleiermacher and Paul Tillich toward a Hindu-inspired Emersonian post-Christian nature spirituality. Ernst Bloch is another influence on Corrington.[2]

As an alternative to contemporary metaphysical perspectives that are either too dependent upon a brute descriptive materialism on the one hand or to an honorific process cosmology on the other, ecstatic naturalism, like all versions of naturalism, assumes that nature is all there is; there is no recourse made to supernaturalistic forces or entities. For Corrington, however, ‘nature’ does not refer to anything, but is the dynamic entirety, an extremely wide and deeply vast reality that creates itself out of itself alone. In order to effectively speak or theorize about nature, then, Corrington has picked up on “a distinction dear to Averroes, Thomas of Aquinas, Baruch Spinoza, and Ralph Waldo Emerson (among others)” between natura naturans (nature naturing) and natura naturata (nature natured). (A Semiotic Theory p. 40) The perspective of ecstatic naturalism attempts to remain accountable to the insights of evolutionary sciences even as it probes ever deeper into those aspects of nature that elude strictly scientific inquiries. As a naturalist, Corrington is deeply suspicious of teleological descriptions of nature and finds in Arthur Schopenhauer’s ‘will to life’ a foundational ‘intention’ in organisms which anticipates Darwinian explanations of life’s perpetuation.

Robert S. Corrington is the author of 11 books and 80 articles in the fields of philosophy, theosophy, theology, psychoanalysis, and semiotics as well as editor of several books on metaphysics and semiotics. He has also authored two plays.