Sensory deprivation (Sendep) or perceptual isolation[1] is the deliberate reduction or removal of stimuli from one or more of the senses. Simple devices such as blindfolds or hoods and earmuffs can cut off sight and hearing, while more complex devices can also cut off the sense of smell, touch, taste, thermoception (heat-sense), and 'gravity'. Sensory deprivation has been used in various alternative medicines and in psychological experiments (e.g. with an isolation tank). Sensory deprivation can be used also in sexual acts to produce a feeling of repression or make other senses more sensitive; for example, the sensation of touch may be stronger when a blindfold is in use.[citation needed]

A related phenomenon is perceptual deprivation, also called the ganzfeld effect. In this case a constant uniform stimulus is used instead of attempting to remove the stimuli; this leads to effects which has similarities to sensory deprivation.[4]

Sensory deprivation techniques were developed by some of the armed forces within NATO, as a means of interrogating prisoners within international treaty obligations.[5] The European Court of Human Rights ruled that the use of the five techniques by British security forces in Northern Ireland amounted to a practice of inhuman and degrading treatment.

In chamber REST, subjects lie on a bed in a completely dark and sound reducing (on average, 80 dB) room for up to 24 hours. Their movement is restricted by the experimental instructions, but not by any mechanical restraints. Food, drink and toilet facilities are provided in the room and are at the discretion of the tester. Subjects are allowed to leave the room before the 24 hours are complete; however, fewer than 10% actually do.[6]

In flotation REST, the room contains a tank or pool. The flotation medium consists of a skin-temperature solution of water and Epsom salts at a specific gravity that allows for the patient to float supine without worry of safety. In fact, to turn over while in the solution requires "major deliberate effort." Fewer than 5% of the subjects tested leave before the session duration ends, which is usually around an hour for flotation REST.[6]

For the first forty minutes it is reportedly possible to experience itching in various parts of the body (a phenomenon also reported to be common during the early stages of meditation). The last 20 minutes often end with a transition from beta or alpha brainwaves to theta, which typically occur briefly before sleep and again at waking. In a float tank, the theta state can last for several minutes without the subject losing consciousness. Some use the extended theta state as a tool for enhanced creativity and problem solving. Spas sometimes provide commercial float tanks for use in relaxation. Flotation therapy has been academically studied in the USA and in Sweden with published results showing reduction of both pain and stress.[7] The relaxed state also involves lowered blood pressure and maximal blood flow.

Several differences exist between flotation and chamber REST. For example, with the presence of a medium in flotation REST, the subject has reduced tactile stimulation while experiencing weightlessness. The addition of Epsom salts to attain the desired specific gravity may have a therapeutic effect on hypertonic muscles. Since one of the main effects of chamber REST has been the resulting state of relaxation, the effects of chamber REST on arousal are less clear-cut, which can be attributed to the nature of the solution.[8]

Third, the research questions asked between each technique are different. Chamber REST questions stemmed from research that began in the 1950s and explored a variety of questions about the need for stimulation, nature of arousal and its relationship with external stimulation. Practitioners of this explored its utility in the treatment of major psychiatric dysfunctions such as autism and substance misuse. On the contrary, flotation REST was seen as more of a recreational tool as it was tested more for its use with stress-related disorders, pain reduction and insomnia.[6]

Numerous studies have debated which method is a more effective treatment process, however, only one has explored this statistically. 19 subjects, all of whom used chamber and/or flotation REST to induce relaxation and/or treat smoking, obesity, alcohol intake or chronic pain were analyzed. The statistic of interest, d, is a measure of the size of the treatment effect. For reference, d=0.5 is considered a moderate effect and d=0.8 a large effect. The 19 subjects who underwent chamber REST had d=0.53 and 6 flotation REST subjects showed d=0.33. Additionally, when examining subjects undergoing REST treatment and REST in conjunction with another treatment method, there was little difference.[10]

Alcoholism has been the target of research associated with REST. In conjunction with anti-alcohol educational messages, patients who underwent two hours of REST treatment reduced alcohol consumption by 56% in the first two weeks after treatment. The reduction in consumption was maintained during follow-ups conducted three and 6 months after first treatment. It is, however, possible that this is caused by the placebo effect.

Results from a study conducted by Washington State University are listed in the table below.[12]

Lastly, REST has been tested to determine its effect on other drug users. A University of Arizona study used chamber REST as a complement to traditional outpatient substance abuse treatment and found that 43% of the patients after four years continued to be sober and drug-free. No one in the control group remained clean after eight months.[13]

Studies have been conducted to test the effect of sensory deprivation on the brain. One study took 19 volunteers, all of whom tested in the lower and upper 20th percentiles on a questionnaire which measures the tendency of healthy people to see things not really there, and placed them into a pitch black, soundproof booth for 15 minutes. After, they completed another test that measures psychosis-like experiences, originally used to study recreational drug users. Five people reported seeing hallucinations of faces, six reported seeing shapes/faces not actually there, four noted a heightened sense of smell and two people reported sensing a "presence of evil" in the room. Unsurprisingly, people who scored lower on the first test experienced fewer perceptual distortions; however, they still reported seeing a variety of delusions and hallucinations.

According to the Journal of Nervous and Mental Disease the hallucinations are caused by the brain misidentifying the source of what it is currently experiencing, a phenomenon called faulty source monitoring.[14]

The five techniques of wall-standing; hooding; subjection to noise; deprivation of sleep; deprivation of food and drink were used by the security forces in Northern Ireland in the early 1970s. After the Parker Report of 1972 these techniques were formally abandoned by the United Kingdom as aids to the interrogation of paramilitary suspects.

The Irish Government on behalf of the men who had been subject to the five methods took a case to the European Commission on Human Rights (Ireland v. United Kingdom, 1976 Y.B. Eur. Conv. on Hum. Rts. 512, 748, 788-94 (European Commission of Human Rights)). The Commission stated that it "considered the combined use of the five methods to amount to torture".[15][16] This consideration was overturned on appeal. In 1978 the European Court of Human Rights (ECtHR) examined the United Nations' definition of torture, and subsequently ruled that the five techniques "did not occasion suffering of the particular intensity and cruelty implied by the word torture", however they did amount "to a practice of inhuman and degrading treatment", which is in breach of the European Convention on Human Rights, article 3.[17]

It their judgment[18] the court states that:

These methods, sometimes termed "disorientation" or "sensory deprivation" techniques, were not used in any cases other than the fourteen so indicated above. It emerges from the Commission's establishment of the facts that the techniques consisted of: 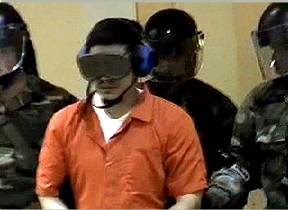 Padilla was convicted of aiding terrorists in 2007 and was sentenced to 17 years, 4 months in prison. While awaiting trial, reports surfaced that he was being tortured for information with the use of sensory deprivation for weeks at a time. For 1,307 days, Padilla was kept in a 9' x 7' cell with no natural light, clock or calendar. When Padilla left his cell, he was shackled and fitted with heavy goggles and headphones. His counsel argues that while he was being interrogated Padilla was subjected to harsh lights and pounding sounds. While meeting with his counsel, they reported Padilla exhibiting facial tics, random eye movements and unusual contortions of his body. According to them, Padilla had become so "shattered" that he became convinced his lawyers were part of a continuing interrogation program and saw his captors as protectors.[14]

In January 2008, the BBC aired a Horizon special titled "Total Isolation." The premise of the show centered on 6 individuals, four men and two women, agreeing to be shut in a cell inside a nuclear bunker, alone and in complete darkness for 48 hours. Prior to isolation, the volunteers underwent tests of visual memory, information processing, verbal fluency and suggestibility.

After the two days and two nights the subjects noted that their inability to sense time, as well as hallucinations, made the experience difficult. Of the six volunteers, three experienced auditory and visual hallucinations — snakes, oysters, tiny cars and zebras. One was convinced their sheets were wet. Two seemed to cope well.

When complete, the same tests were conducted a second time. The results indicated all volunteers' ability to complete the simplest tasks had deteriorated. One subject's memory capacity fell 36% and all the subjects had trouble thinking of words beginning with a nominated letter; in this case, the letter "F". All four of the men had markedly increased suggestibility, although this was not the case with the women.[19]

"It's really hard to stimulate your brain with no light. It's blanking me. I can feel my brain just not wanting to do anything."