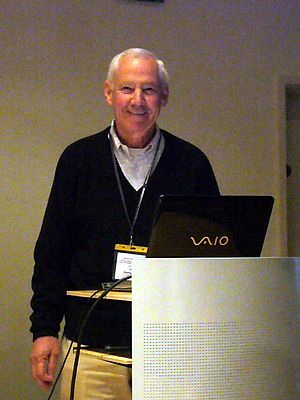 Stanley Falkow, PhD, (born 1934 in Albany, New York) is microbiologist and a professor of microbiology and immunology at Stanford University School of Medicine.[1] He is sometimes referred to as the father of molecular microbial pathogenesis, which is the study of how infectious microbes and host cells interact to cause disease at the molecular level.[2] He formulated molecular Koch's postulates, which have guided the study of the microbial determinants of infectious diseases since the late 1980s.[3]

Falkow received his B.S. degree from the University of Maine, graduating cum laude, and went on to earn his Ph.D. from Brown University. Following the completion of his graduate studies, Dr. Falkow went on to become a staff member at the Walter Reed Army Institute of Research (WRAIR) in the Department of Bacterial Immunology where he was eventually named the assistant chief of the department.[1] Dr. Falkow's early work in the 1960s focused on the genetic mechanisms that enable populations of bacteria to become resistant to antibiotics. He demonstrated that organisms, such as shigella, can possess gene fragments called plasmids that exist apart from the bacterial chromosome and that they carry specialized information for survival. Under selective pressure from antibiotics, one species of bacteria can pass its plasmids to another unidirectionally rather than by mating, thereby preserving its own specialized survival genes.

In 1966, he joined Georgetown University School of Medicine as a professor of microbiology. He later moved to Seattle to become a member of the faculty of the Department of Microbiology and Immunology at the University of Washington School of Medicine. Here he described how meningitis and gonorrhea organisms acquire plasmids to become resistant to penicillin and other antibiotics.

In the 1970s, Falkow shifted his focus to the infection process. During this period, he showed that a life-threatening diarrhea prevalent in many developing countries is caused by a sub-type of E. coli. He also co-authored (with Royston C. Clowes, Stanley N. Cohen, Roy Curtiss III, Naomi Datta and Richard Novick) a proposal for uniform nomenclature for bacterial plasmids.[4]

In 1981, he was named chairman of the Department of Medical Microbiology at Stanford University School of Medicine, a position he held until 1985. While at Stanford, Falkow encouraged Esther Lederberg to continue directing the Stanford Plasmid Reference Center, an internationally used registry for plasmids, transposons and insertion sequences.[5])

Among his contributions, Dr. Falkow's adopted the perspective of viewing infection as a process that is ultimately mediated by the host. He discovered that infectious microbes employ genes that are activated only inside host cells. His work carries clinical applications, such as a new vaccine for whooping cough, as well as advancing knowledge in discovery of how cells are penetrated by bacteria.

Dr. Falkow has published numerous articles, and has served on the editorial boards of several professional publications. In addition, he has received numerous awards for his achievements in science. Some of these include the Bristol-Myers Squibb Award for Distinguished Achievement in Infectious Disease Research,[6] the Altemeier Medal from the Surgical Infectious Diseases Society of America, the Howard Taylor Ricketts Award Lecture at the University of Chicago, and the Paul Ehrlich and Ludwig Darmstaedter Prize. In 2003, he received the Abbott Lifetime Achievement Award from the American Society for Microbiology and the Selman A. Waksman Award in Microbiology from the National Academy of Sciences.[7] He received the Robert Koch Award in 2000.[8]

Dr. Falkow was elected President of the American Society for Microbiology and served from July 1997 through June 1998. He was elected to the Institute of Medicine in 1997 and received the Maxwell Finland Award from the National Foundation of Infectious Diseases in 1999. He also received in 1999 an Honorary Doctor of Science, University of Guelph, Guelph, Ontario and the University of Maine Alumni Career Award. He has received honorary doctorates in Europe and the U.S.

In September 2008, Dr. Falkow was one of five scientists awarded the prestigious Lasker Award for medical research.[9]