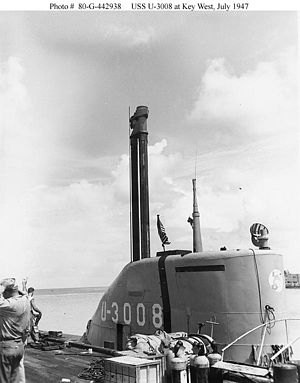 USS U-3008 (former German submarine U-3008) conning tower, with the snorkel raised

A submarine snorkel is a device which allows a submarine to operate submerged while still taking in air from above the surface. Royal Navy personnel often refer to it as the snort. A concept devised by Dutch engineers was widely used on German U-boats during the last year of World War II.[1]

Until the advent of nuclear power, submarines were designed to operate on the surface most of the time and submerge only for evasion or for daylight attacks. In 1940, at night, a U-boat was safer on the surface than submerged because ASDIC sonar could detect boats underwater but was almost useless against a surface vessel. However, with continued improvement in methods of radar detection as the war progressed, the U-boat was forced to spend more time under water running on electric motors that gave speeds of only a few knots and with very limited range.

An early submarine snorkel was designed by James Richardson, an Assistant Manager at Scotts Shipbuilding and Engineering Company, Greenock, Scotland as early as 1916, during World War I. Although the company received a British Patent for the design,[2] no further use was made of it—the British Admiralty did not accept it for use in Royal Navy submarines.[3] In November 1926 Capt. Pericle Ferretti of the technical corps of the Italian Navy ran tests with a ventilation pipe installed on the submarine H 3. The tests were largely successful and a similar system was designed for the Sirena class, but was eventually scrapped; the following snorkel systems were not based on Ferretti's design.[4][5]

Germany defeated the Netherlands in 1940; their capture of O-25 and O-26 was a stroke of luck for the Kriegsmarine (German navy). The Dutch O-21 series was operating a device named a snuiver (sniffer). The Dutch navy had been experimenting as early as 1938 with a simple pipe system on the submarines O-19 and O-20 that enabled them to travel at periscope depth operating on its diesels with almost unlimited underwater range while charging the propulsion batteries. The system was designed by the Dutchman Jan Jacob Wichers.

The Kriegsmarine first viewed the snorkel as a means to take fresh air into the boats but saw no need to run the diesel engines under water. However, by 1943 more U-boats were being lost, so the snorkel was retrofitted to the VIIC and IXC classes and designed into the new XXI and XXIII types.

The first Kriegsmarine boat to be fitted with a snorkel was U-58 which experimented with the equipment in the Baltic Sea during the summer of 1943. Boats began to use it operationally in early 1944, and by June 1944 about half of the boats stationed in the French bases had snorkels fitted.

On Type VII U-boats the snorkel folded forward and was stored in a recess on the port side of the hull, while on the IX Types the recess was on the starboard side. The XXI and XXIII types both had telescopic masts that rose vertically through the conning tower close to the periscope.

Snorkels created several problems for their users. A U-boat with a snorkel raised was limited to six knots to avoid breaking the tube, and its sound-detection gear was useless with the diesel engine running. Most dramatically, snorkels were equipped with automatic valves to prevent seawater from being sucked into the diesels, but when these valves slammed shut the engines would draw air from the boat itself before shutting down, causing a partial vacuum which was extremely painful to the ears of the crew and sometimes even ruptured eardrums.[6] This problem still exists in later model diesel submarines, but is mitigated by high-vacuum cut-off sensors that shut down the engines when the vacuum in the ship reaches a pre-set point.

While the snorkel renders a submarine far less detectable, it is not perfect. In clear weather, diesel exhaust can be seen on the surface to a distance of about three miles,[7] while 'periscope feather' (the wave created by the snorkel or periscope moving through the water), is visible from far off in calm sea conditions. Modern radar is also capable of detecting a snorkel in calm sea conditions. Early Royal Navy ship's radar set Model 271 was shown in tests conducted in 1940 to detect the periscope tip of a submerged submarine at a distance of half a mile.[8]

Modern snorkel induction masts use a fail-safe design using compressed air, controlled by a simple electrical circuit, to hold the "head valve" open against the pull of a powerful spring. Seawater washing over the mast shorts out exposed electrodes on top, breaking the control circuit. This vents the compressed air and allows the head valve to slam shut. When the electrodes are again clear of the water, the circuit is re-energized and the valve reopens.