The American Historical Review is the official publication of the American Historical Association. It targets readers interested in all periods and facets of history. It is widely regarded as the premier journal of American history in the world,[1][2] and is also highly respected as a general historical journal. 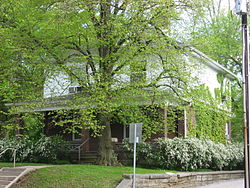 The journal's offices in Bloomington

It was established in 1895 as a joint effort between the history department at Cornell University and its counterpart at Harvard, modeled on The English Historical Review and the French Revue historique,[3] "for the promotion of historical studies, the collection and preservation of historical documents and artifacts, and the dissemination of historical research."

The journal is published in February, April, June, October and December as a book-like academic publication with research papers and book reviews, among other items (each issue typically runs to about 400 pages). Each year approximately 25 articles and review essays and 1,000 book reviews are published.

The editorial offices are located at Indiana University Bloomington, where a small staff produces the publication under the guidance of a 12-member advisory board. From the October 2007 issue until 2011, the journal was published by the University of Chicago Press. In September 2011, it was announced that the journal would be published by Oxford University Press, beginning in 2012.[4]