The United States Census (plural censuses) is a census that is legally mandated by the US Constitution, and takes place every 10 years. The first census after the American Revolution was taken in 1790, under Secretary of State Thomas Jefferson; there have been 23 federal censuses since that time.[1]

The most recent national census took place in 2020; the next census is scheduled for 2030. Since 2013, the Census Bureau began discussions on using technology to aid data collection starting with the 2020 census.[2] In 2020, every household received an invitation to complete the census over the Internet, by phone or by paper questionnaire.[3][4] For years between the decennial censuses, the Census Bureau issues estimates made using surveys and statistical models, in particular, the Population Estimates Program and American Community Survey.

The first census after the American Revolution was taken in 1790, under Secretary of State Thomas Jefferson; there have been 22 federal censuses since that time.[1] The current national census was held in 2010 and the next census is scheduled for 2020 and much of it will be done using the Internet.[5] For years between the decennial censuses, the Census Bureau issues estimates made using surveys and statistical models, in particular, the American Community Survey.

The United States Census is a population census is distinct from the U.S. Census of Agriculture, which is no longer the responsibility of the Census Bureau. It is also distinct from local censuses conducted by some states or local jurisdictions. 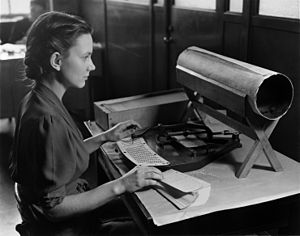 A woman with a Hollerith pantograph punch, the keyboard is for the 1920 US Census population card 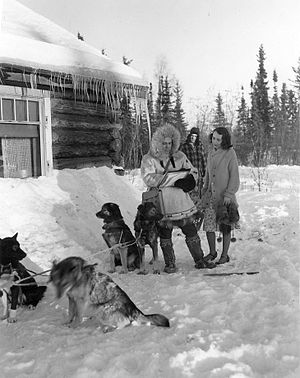 This 1940 Census publicity photo shows a census worker in Fairbanks, Alaska. The dog musher remains out of earshot to maintain confidentiality.

Decennial U.S. Census figures are based on actual counts of persons dwelling in U.S. residential structures. They include citizens, non-citizen legal residents, non-citizen long-term visitors and illegal immigrants. The Census Bureau bases its decision about whom to count on the concept of usual residence. Usual residence, a principle established by the Census Act of 1790, is defined as the place a person lives and sleeps most of the time. The Census Bureau uses special procedures to ensure that those without conventional housing are counted; however, data from these operations are not considered as accurate as data obtained from traditional procedures.[6]

The Census also uses hot deck imputation to assign data to housing units where occupation status is unknown. This practice has effects across many areas, but is seen by some as controversial[7] because it may increase representation for reliably Democratic districts.[citation needed] However, the practice was ruled constitutional by the U.S. Supreme Court in Utah v. Evans.

Certain American citizens living overseas are specifically excluded from being counted in the census even though they may vote. Only Americans living abroad who are "Federal employees (military and civilian) and their dependents living overseas with them" are counted. "Private U.S. citizens living abroad who are not affiliated with the Federal government (either as employees or their dependents) will not be included in the overseas counts. These overseas counts are used solely for reapportioning seats in the U. S. House of Representatives."[8]

In the United States' recent censuses, Census Day has been April 1.[9] However, it was previously in August, as per these instructions given to U.S. Marshals: "All the questions refer to the day when the enumeration is to commence, the first Monday in August next. Your assistants will thereby understand that they are to insert in their returns all the persons belonging to the family on the first Monday in August, even those who may be deceased at the time when they take the account; and, on the other hand, that they will not include in it infants born after that day."[10]

Disadvantaged minorities are statistically more likely to be undercounted. For example, the Census Bureau estimates that in 1970 over six percent of blacks went uncounted, whereas only around two percent of whites went uncounted. Democrats often argue that modern sampling techniques should be used so that more accurate and complete data can be inferred. Republicans often argue against such sampling techniques, stating the U.S. Constitution requires an "actual enumeration" for apportionment of House seats, and that political appointees would be tempted to manipulate the sampling formulas.[11]

Groups like the Prison Policy Initiative assert that the census practice of counting prisoners as residents of prisons, not their pre-incarceration addresses, leads to misleading information about racial demographics and population numbers.[12]

In 2010 Jaime Grant, then director of the National Gay and Lesbian Task Force's Policy Institute, thought of the idea of a bright pink sticker for people to stick on their census envelope which had a form for them to check a box for either "lesbian, gay, bisexual, transgender or straight ally," which her group called "queering the census."[13] Although the sticker was unofficial and the results were not added to the census, she and others hope the 2020 census will include such statistics.[13]

In 2015 Laverne Cox called for transgender people to be counted in the census.[14]

Censuses had been taken prior to the Constitution's ratification; in the early 17th century, a census was taken in Virginia, and people were counted in nearly all of the British colonies that became the United States.

Throughout the years, the country's needs and interests became more complex. This meant that statistics were needed to help people understand what was happening and have a basis for planning. The content of the decennial census changed accordingly. In 1810, the first inquiry on manufactures, quantity and value of products occurred; in 1840, inquiries on fisheries were added; and in 1850, the census included inquiries on social issues, such as taxation, churches, pauperism, and crime. The censuses also spread geographically, to new states and territories added to the Union, as well as to other areas under U.S. sovereignty or jurisdiction. There were so many more inquiries of all kinds in the census of 1880 that almost a full decade was needed to publish all the results. In response to this, the census was mechanized in 1890, with tabulating machines made by Herman Hollerith. This reduced the processing time to two and a half years.[15]

For the first six censuses (1790–1840), enumerators recorded only the names of the heads of household and a general demographic accounting of the remaining members of the household. Beginning in 1850, all members of the household were named on the census. The first slave schedules were also completed in 1850, with the second (and last) in 1860. Censuses of the late 19th century also included agricultural and industrial schedules to gauge the productivity of the nation's economy. Mortality schedules (taken between 1850 and 1880) captured a snapshot of life spans and causes of death throughout the country.

The first nine censuses (1790–1870) were not managed by the Executive branch, but by the Judicial branch. The United States federal court districts assigned U.S. marshals, who hired assistant marshals to conduct the actual enumeration. The census enumerators were typically from the village or neighbourhood and often knew the residents. Before enabling self-identification on the censuses, the US Census Bureau relied on local people to have some knowledge of residents. Racial classification was made by the census enumerator in these decades, rather than by the individual. 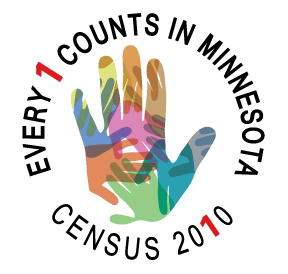 The principal purpose of the census is to divide the house seats by population. In addition, collected data is used in aggregate for statistical purposes.[21] Replies are obtained from individuals and establishments only to enable the compilation of such general statistics. The confidentiality of these replies is very important. By law, no one— neither the census takers nor any other Census Bureau employee— is permitted to reveal identifiable information about any person, household, or business. Without such protections, those living illegally in the United States or hiding from the government would be deterred from submitting census data.

Historical FBI use of data

Under the administration of President Franklin D. Roosevelt the Federal Bureau of Investigation (FBI), using primarily census records, compiled (1939–1941) the Custodial Detention Index ("CDI") on citizens, enemy aliens, and foreign nationals, who might be dangerous. The Second War Powers Act of 1941 repealed the legal protection of confidential census data, which was not restored until 1947. This information facilitated the internment of Japanese-Americans, following the Japanese attack on the U.S. at Pearl Harbor on December 7, 1941 and the internment of Italian- and German-Americans following the United States' entry into World War II.[25][26]

In 1980, four FBI agents went to the Census Bureau's Colorado Springs office with warrants to seize Census documents, but were forced to leave with nothing. Courts upheld that no agency, including the FBI, has access to Census data.[27]

The census records and data specific to individual respondents are not available to the public until 72 years after a given census was taken, but aggregate statistical data derived from the census are released as soon as they are available. Every census up to and including 1940 is currently available to the public and can be viewed on microfilm released by the National Archives and Records Administration, the official keeper of archived federal census records. Complete online census records can be accessed for no cost from National Archives facilities and many libraries,[28] and a growing portion of the census is freely available from non-commercial online sources.[29][30][31]

Census microdata for research purposes are available for censuses from 1850 forward through the Integrated Public Use Microdata Series (IPUMS), and scanned copies of each of the decennial census questionnaires are available online from many websites. Computerized aggregate data describing the characteristics of small geographic areas for the entire period from 1790 to 2010 are available from the National Historical Geographic Information System. 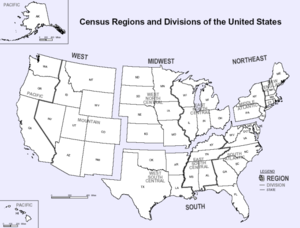 The bureau recognizes four census regions within the United States and further organizes them into nine divisions. These regions are groupings of states that subdivide the United States for the presentation of data. They should not be construed as necessarily being thus grouped owing to any geographical, historical, or cultural bonds.

Cite error: <ref> tags exist for a group named "lower-alpha", but no corresponding <references group="lower-alpha"/> tag was found, or a closing </ref> is missing