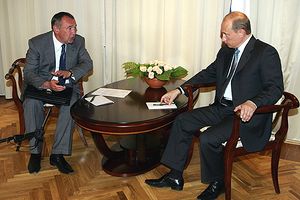 Vladimir Fyodorovich Chub (Russian: Владимир Фёдорович Чуб) (born 24 July 1948 in Pinsk, Brest Province, Belarus) is the governor of Rostov Oblast in Russia. He was appointed governor in October 1991 and later that year won an election for the post by a large majority. He was re-elected in 1996 and 2001. He was appointed to the Federation Council in 1993.[1] Prior to his governorship, he was First Secretary of the CPSU committee of Proletarian district of Rostov.[2] He is a member of the United Russia party, formerly a member of NDR, and OKS.[3] His administration takes a strong stance against illegal political activity. Chub is of Ukrainian ancestry.