Wallace Smith Broecker (born November 29, 1931 in Chicago[1]) is the Newberry Professor in the Department of Earth and Environmental Sciences at Columbia University and a scientist at Columbia's Lamont-Doherty Earth Observatory. He developed the idea of a global "conveyor belt" linking the circulation of the global ocean and made major contributions to the science of the carbon cycle and the use of chemical tracers and isotope dating in oceanography. Broecker has received the Crafoord Prize and the Vetlesen Prize.

Broecker's areas of research include Pleistocene geochronology, radiocarbon dating and chemical oceanography, including oceanic mixing based on stable and radioisotope distribution. This includes research on the biogeochemical cycles of the element carbon and on the record of climate change contained in polar ice and ocean sediments.

Broecker has authored over 450 journal articles and 10 books. He is perhaps best known for his discovery of the role played by the ocean in triggering the abrupt climate changes which punctuated glacial time, in particular the development and popularization of the idea of a global "conveyor belt" linking the circulation of the global ocean.[2] However, his contributions stretch far beyond the "conveyor"; his work is the foundation of carbon cycle science, and his applications of radiocarbon to paleoceanography are landmarks in the field. His work with chemical tracers in the ocean is integral to modern chemical oceanography; indeed, his textbook "Tracers in the Sea", authored with Tsung-Hung Peng, is still cited in the contemporary literature 25 years after its publication.

Broecker writes about his research, on mode changes in the thermohaline circulation: "We have clear evidence that different parts of the earth's climate system are linked in very subtle yet dramatic ways. The climate system has jumped from one mode of operation to another in the past. We are trying to understand how the earth's climate system is engineered, so we can understand what it takes to trigger mode switches. Until we do, we cannot make good predictions about future climate change." [3]

He attended Wheaton College and interacted with J. Laurence Kulp, Paul Gast and Karl Turekian. At Wheaton, he met his wife Grace Carder. Broecker then transferred to Columbia University. At Columbia, he worked at the Lamont Geological Observatory with W. Maurice Ewing and Walter Bucher.

In 1975, Broecker coined the phrase global warming when he published a paper titled: “Climate Change: Are we on the Brink of a Pronounced Global Warming?”[4] He has recently co-written an account of climate science with the science journalist, Robert Kunzig. This includes a discussion of the work of Broecker's Columbia colleague Klaus Lackner in capturing CO2 from the atmosphere - which Broecker believes must play a vital role in reducing emissions and countering global warming. Broecker has been described in the New York Times as a geoengineering pioneer.[5]

Broecker has 6 children, 7 grandchildren, and 7 great-grandchildren. His wife Grace died in 2007. They were together for 53 years. 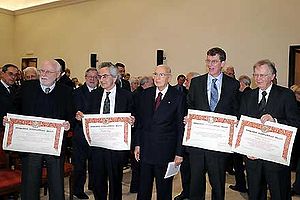 Broeker (right) with the other 2008 Balzan Prize winners and Giorgio Napolitano, President of Italy

In September 2008 Broecker was the recipient of the Balzan Prize for outstanding achievement in science. His citation was made by Enric Banda (Research Professor of Geophysics at the Institute of Earth Sciences in Barcelona): “For his extraordinary contributions to the understanding of climate change through his discoveries concerning the role of the oceans and their interactions with the atmosphere, as well as the role of glacial changes and the records contained in ice cores and ocean sediments. His contributions have been significant in understanding both gradual and abrupt climate change”.

In January 2009, Broecker was awarded the BBVA Foundation Frontiers of Knowledge Award in the Climate Change category for his seminal research into the oceans’ biological and chemical processes that pioneered the development of Earth System Science as the basis for understanding global climate change, both past and present. The award certificate also highlights “his holistic approach”, which has led him to identify “the mechanisms of abrupt climate change”.