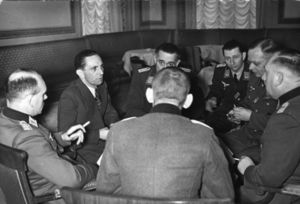 The Wehrmachtbericht (German: "armed forces report") was the daily Oberkommando der Wehrmacht (OKW) communique and a key component of Nazi propaganda during World War II. Produced by the Propaganda Department of the OKW (Wehrmachtpropaganda (de)), also known as WPr), it covered the military situation on all fronts and was broadcast daily on the Reich Broadcasting Corporation of Nazi Germany. All broadcasts had to be authorized by the Reich Ministry of Propaganda.

Both civilian and military authorities considered the Wehrmachtbericht a vital instrument of home-front mobilization in the total war, especially after the defeat at Stalingrad. From the onset, the Nazi propaganda machine regarded these reports as possessing a future value, beyond the immediate use as news delivery medium. The main message consistently presented the superiority of the German soldier's spirit and character. True to its propaganda aims, the final 9 May 1945 report formed the basis of the myth of the clean Wehrmacht.[1] 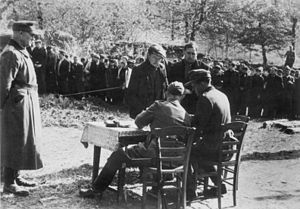 Original 1944 propaganda caption: "Fight against terrorists in France. Communist terrorist groups are attempting to disrupt the German security measures.Wehrmachtbericht reports daily on successes against the saboteurs. In the marketplace the first interrogations take place."

Any news in the Third Reich was conceived as a form of propaganda. From the beginning of the war, a central component in the activities of the propaganda troops was the preparation of combat reports to be used as source material for the OKW dispatches. The propaganda companies were the only news-reporting units able to move around in areas of military operation and gather news, as civilian reporters were prohibited from entering zones of military activity.[2]

The first report aired with the start of World War II on 1 September 1939 and the last one was issued on 9 May 1945 by the Flensburg Government. After the Invasion of the Soviet Union in June 1941, the reports broadcast at midday began with a fanfare (from Franz Liszt's symphonic poem Les Préludes), followed by the announcement: "From the Führer's Headquarters, the Armed Forces High Command announces" (Aus dem Führerhauptquartier, das Oberkommando der Wehrmacht gibt bekannt).

The effects of the Wehrmachtbericht reports were enhanced from 12 May 1940 when Major Erich Murawski (de) of the OKW Propaganda Department was given the task of adding commentary to them, both on the radio (21:00 to 21:15) and in the press. The commentary was aimed at the civilian audience, and were written by a professional officer in layman's language so that the population could easily grasp the daily military developments. The commentator thus had a direct line to the German public, and was versed both in the military and the propaganda realms.[3] Murawski later wrote a book that analyzed the Wehrmachtbericht commentary (see Assessment section).

All broadcasts had to be authorized by Joseph Goebbels's Reich Ministry of Propaganda as controlling institution of the German media. Both Goebbels and Jodl considered the Wehrmachtbericht a vital instrument of home front mobilization under total war circumstances, especially after the defeat at Stalingrad.

The Wehrmachtbericht references were established by the Oberkommando des Heeres (OKH) under Generaloberst Walther von Brauchitsch on 27 April 1940 as a military commendation. A further award, the Honor Roll of the German Army, was later introduced in mid 1941. Adolf Hitler established the Honour Roll Clasp of the Army on 30 January 1944 as a wearable award for bravery.

The Wehrmachtbericht reports around the 1942 summer campaign and the defeat at Stalingrad provide an interesting case study on the effects of the reports on Germany's population and the evolution of the propaganda efforts themselves.

In August 1942, the Stalingrad name was featured prominently in the reports even before the Wehrmacht reached the outskirts of the city. The reports were factual and restrained; nevertheless, Goebbels issued instructions to exercise "cautious optimism" so that not to set expectations too high among the population.[4]

The Soviet offensive (Operation Uranus) broke the German flanks on 19 November and the 6th Army became trapped in Stalingrad three days later. The concern of the Nazi propaganda was then how to present this military catastrophe to the public. After the initial shock, every effort was made to hide the true scope of the setback from the population. The Wehrmachtbericht reports published between 19 and 24 November merely mentioned the Soviet attack on the southern sector in the East, not addressing the extent of Wehrmacht's difficulties.[5]

After acknowledging the Soviet breakthrough starting from 24 November on, the reports described "heavy fighting", but provided no references to the counteroffensive or the encirclement. The SD reports indicated that the 24 Nov report caused alarm among the population. There were periods where the OKW dispatches did not mention Stalingrad at all. Wild rumors describing 100,000 troops trapped in Stalingrad were beginning to circulate, as some German citizens were able to get the news from foreign radio stations.[6]

The official silence was only broken on 16 January when the dispatch mentioned that the 6th Army was fighting the enemy "on all sides". Goebbels had been aware that the official policy on suppressing the news was inadequate, so he was able to convince Hitler to release the report for publication. The reports since focused on the concept of "total war" with this message continuing through the rest of the war.[6]

The final broadcast aired on 9 May 1945 and aimed to highlight the Wehrmacht's heroism, honor and sacrifice:[1]

Since midnight the weapons on all the fronts are silent. By the order of the Grand Admiral Dönitz the Wehrmacht ceased its hopeless fighting. With this, a nearly 6-year heroic struggle has ended. It brought us great victories but also heavy defeats. The Wehrmacht has been honorably defeated by superior forces. The German soldier, in accordance with his oath, has given his unforgettable effort to his people. Till the end the homeland supported him with all its strength, under the heaviest sacrifices. The singular performance of the front and Fatherland shall receive its final honor in the later, fair judgement. The achievements and sacrifices of German soldiers at sea, on the land and in the air has not escaped the notice of our enemy. Therefore, every soldier can hold his head high, and proudly lay his weapon down. He can start to work bravely and confidently the bitterest hour of our history, for the eternal life of our people.

These last words, intended for public consumption as part of the Wehrmacht's propaganda, did not miss their mark, according to historian Daniel Uziel. They laid the foundation for the legend of the 'clean Wehrmacht' which lasted until the end of the 20th century among the large parts of Germany's population.[1]

The Wehrmacht and civilian propaganda organizations cooperated successfully and effectively throughout the war, even though several apologetic postwar publications described the relations between them as problematic, such as an account provided by Wedel.[2]

Murawski, in his postwar role with as the director of the de (German Federal Military Archive), gave his assessment of the changes in the broadcast style of the Wehrmachtbericht:[7]

The collected reports were published in 1985 and are available in German: