Bate was born in Kew, Victoria as Zara Kate Dickins. She was educated at Ruyton Girls' School and Toorak College. In 1925, aged 19, she and her friend Bettine 'Betty' James (later the wife of Sir Roy Grounds) established a dress shop in Little Collins Street. With another friend, she later opened a salon, called Magg, in Toorak Village. In 1961 a Magg dress won the Australian Gown of the Year award.[1]

Her first husband was Colonel James Fell, by whom she had three sons, Nicholas (1937) and twins Sam and Andrew (1939). Their marriage broke down soon after the birth of the twins. They divorced, and in 1947 she married Harold Holt, a Liberal Party politician. He legally adopted her children and gave them his surname. Tom Frame's biography The Life and Death of Harold Holt reveals that Holt was the twins' biological father. 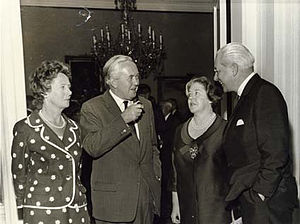 The Holts meeting with Prime Minister of the U.K Harold Wilson and Mrs Wilson in 1967.

Harold Holt was a member of Robert Menzies' Cabinet continuously from 1949, becoming deputy Liberal leader in 1956 and Treasurer in 1958. When Menzies retired in January 1966, Holt became Prime Minister. In December 1967, he drowned and his body was never recovered.

Zara Holt was created a Dame Commander of the Order of the British Empire in the Queen's Birthday Honours of June 1968, for "devotion to the public interest".[2] In 1968 Dame Zara published My Life and Harry: An autobiography.[3]

On 19 February 1969, Dame Zara Holt married Jeff Bate, a farmer, Liberal politician and member of the Bate family of Tilba, New South Wales. She then became known as Dame Zara Bate. It was the third marriage for both of them. In the early 1970s, Dame Zara promoted Maxwell House instant coffee in television commercials. After Jeff Bate's death in 1984, Dame Zara retired to the Gold Coast, where she died in 1989 at age 80.