From Infogalactic: the planetary knowledge core
Jump to: navigation, search
For other ships with the same name, see USS Randolph.
File:USS Randolph (CV-15) under repair.jpg
Randolph alongside the repair ship Jason at Ulithi Atoll in the Caroline Islands on 13 March 1945, showing damage to her after flight deck resulting from a kamikaze hit on 11 March. Photographed from a Miami floatplane.
File:USS Randolph CVA-15 after SCB25A NAN10-55.jpg
USS Randolph after her SCB-27A modernization.

USS Randolph (CV/CVA/CVS-15) was one of 24 Essex-class aircraft carriers built during World War II for the United States Navy. The second US Navy ship to bear the name, she was named for Peyton Randolph, president of the First Continental Congress. Randolph was commissioned in October 1944, and served in several campaigns in the Pacific Theater of Operations, earning three battle stars. Decommissioned shortly after the end of the war, she was modernized and recommissioned in the early 1950s as an attack carrier (CVA), and then eventually became an antisubmarine carrier (CVS). In her second career she operated exclusively in the Atlantic, Mediterranean, and Caribbean. In the early 1960s she served as the recovery ship for two Project Mercury space missions, including John Glenn's historic first orbital flight.

Randolph was one of the "long-hull" Essex-class ships. She was laid down on 10 May 1943, at Newport News Shipbuilding & Dry Dock Co., Newport News, Virginia. She was launched on 28 June 1944, sponsored by Rose Gillette (wife of Guy M. Gillette, a US Senator from Iowa). Randolph commissioned on 9 October 1944, Captain Felix Locke Baker, USN in command.[1]

Following shakedown off Trinidad, Randolph got underway for the Panama Canal and the Pacific. On 31 December, she reached San Francisco where Air Group 87 was detached and Air Group 12 reported on board for four months duty.

On 20 January 1945, Randolph departed San Francisco for Ulithi, from which she sortied on 10 February with Task Force 58 (TF 58). She launched attacks on 16–17 February against Tokyo airfields and the Tachikawa engine plant. The following day, she made a strike on the island of Chichi Jima. On 20 February, she launched three aerial sweeps in support of ground forces invading Iwo Jima and two against Haha Jima. During the next four days, further strikes hit Iwo Jima and combat air patrols were flown almost continuously. Three sweeps against airfields in the Tokyo area and one against Hachijo Jima followed on 25 February before the carrier returned to Ulithi.

Riding at anchor at Ulithi on 11 March, a Yokosuka P1Y1 "Frances" kamikaze hit Randolph on the starboard side aft just below the flight deck, killing 27 men (including four reported missing and five transferred to the hospital ship Relief where they died) and wounding 105 during Operation Tan No. 2. Repaired at Ulithi, Randolph joined the Okinawa Task Force on 7 April. Combat air patrols (CAP) were flown daily until 14 April, when strikes were sent against Okinawa, Ie Shima, and Kakeroma Island. The following day, an air support mission of fighters, bombers, and torpedo planes hit Okinawa and a fighter sweep struck an airfield in southern Kyūshū. Under daily air attack from 17 April on, Randolph continued to send her aircraft on CAP and support missions throughout the month.

In May, planes from the carriers hit the Ryukyu Islands and southern Japan, Kikai (Amami Islands) naval base and airfields, and Kyūshū airfields. Becoming the flagship of TF 58 on 15 May, Randolph continued her support of the occupation of Okinawa until 29 May, when she retired via Guam to the Philippines.

On her next war cruise, as a part of Admiral Halsey's 3rd Fleet, Randolph made a series of strikes up and down the Japanese home islands. With Air Group 16 replacing Air Group 12, the ship launched eight raids on 10 July against airfields in the Tokyo area, principally those on the peninsula east of Tokyo Bay. On the 14th, her planes struck the airfields and shipping in and near Tsugaru Strait. In this attack, two of the important Honshū-Hokkaidō train ferries were sunk and three were damaged. Attacks on the Japanese home islands continued for the next few days, and on 18 July, the Japanese battleship Nagato – lying camouflaged alongside a pier at the Yokosuka Naval Base – was bombed.

Moving southwest, Randolph and other carriers were off the coast of Shikoku on 24 July, for an anti-shipping sweep of the Inland Sea, during which the carrier-battleship Hyūga was heavily damaged and airfields and industrial installations on Kyūshū, Honshū, and Shikoku were hit hard. Randolph's pilots estimated that from 10–25 July they had destroyed 25 to 30 ships, ranging in size from small luggers to a 6,000 long tons (6,100 t) freighter, and had damaged 35 to 40 others. Randolph's strikes continued right up to the morning of the 15 August surrender, when her planes hit Kisarazu Airfield and surrounding installations.[1]

Following the end of the war, Randolph headed home. Transiting the Panama Canal in late September, she arrived at Naval Station Norfolk on 15 October, where she was rigged for "Magic Carpet" service. Before the end of the year, she completed two trips to the Mediterranean area to return American servicemen. Then, in 1946, she became a training ship for reservists and midshipmen, and made a Mediterranean cruise in the latter half of the year. After another voyage to the Caribbean, she embarked midshipmen in the early summer of 1947 for a cruise to northern European waters. Randolph was placed out of commission, in reserve, 25 February 1948, and berthed at Philadelphia Naval Shipyard.

In June 1951, Randolph commenced her SCB-27A modernization program at Norfolk Naval Shipyard. To handle the new generation of carrier aircraft, the flight deck structure was reinforced. Stronger elevators, more powerful hydraulic catapults, and new arresting gear were installed. The island structure was rebuilt, the anti-aircraft turrets were removed, and blisters were added to the hull.[citation needed] Reclassified CVA-15 on 1 October 1952, Randolph recommissioned on 1 July 1953. After shakedown off Guantanamo Bay with Carrier Air Group 10, she took on Carrier Air Group 14, departed Norfolk for the Mediterranean, and joined the 6th Fleet on 3 February 1954. Deployed to the Mediterranean for 6 months of Fleet and NATO exercises in 1954–1955, Randolph entered the Norfolk Naval Shipyard on 18 June 1955 for installation of an angled flight deck and other SCB-125 modernizations.

Leaving the yard in January 1956, Randolph conducted air operations off the East Coast for the next six months, and was the first Atlantic Fleet carrier to launch a Regulus guided missile from her flight deck.

On 14 July 1956, Randolph again steamed east for a seven-month tour of duty with the 6th Fleet in the Mediterranean. When Israel, Britain, and France invaded the United Arab Republic in October of that year, Randolph stood ready. Operating near the Suez Canal, her aircraft provided air cover and surface and air reconnaissance for the evacuation of U.S. nationals from Alexandria. She returned to the United States on 19 February 1957.

After a few months operating off the East Coast, Randolph deployed to the Mediterranean again on 1 July 1957. Between August and December, as political turmoil in Syria threatened to further disturb the already turbulent Mideast, she patrolled the eastern Mediterranean. Back in the United States on 24 February 1958, the flattop made her 5th Mediterranean deployment from 2 September 1958 – 12 March 1959.[1]

Randolph was reclassified CVS-15 on 31 March 1959, and conducted anti-submarine warfare (ASW) operations off the East Coast throughout that year and the next, receiving her fourth consecutive Battle Efficiency Award in September 1960.[1] From October 1960 to March 1961, Randolph underwent the SCB-144 upgrade as part of the Fleet Rehabilitation and Modernization program. She received the new SQS-23 bow sonar, as well as improved displays in the Combat Information Center.[citation needed] 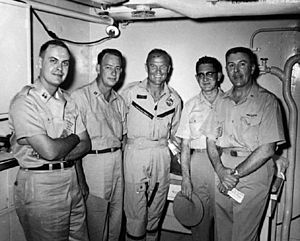 "Best regards and many thanks for all the help, 'Smokey'
John H. Glenn Jr
Mercury Astronaut
a good date -- 20 February 62"

In the summer of 1962, Randolph again steamed to the Mediterranean. Returning to the western Atlantic as the Cuban Missile Crisis broke, she operated in the Caribbean from the end of October through November.[1] On 27 October, Randolph and a group of eleven United States Navy destroyers entrapped a nuclear-armed Soviet Foxtrot-class submarine B-59 near Cuba and started dropping practice depth charges, explosives intended to force the submarine to come to the surface for identification. Allegedly, the captain of the submarine, Valentin Grigorievitch Savitsky, believing that a war might already have started, prepared to launch a retaliatory nuclear-tipped torpedo, but Second Captain Vasili Alexandrovich Arkhipov persuaded the captain to surface to await orders from Moscow.[citation needed]

After a Norfolk overhaul, Randolph resumed her station in the Atlantic. Over the next five years, she made two Mediterranean cruises and a northern European cruise, while spending most of her time off the East Coast and in the Caribbean.[1]

In July 1961, Randolph sailed for operations in the Caribbean and served as the recovery ship after splashdown for astronaut Virgil Grissom on America's second manned space flight, a suborbital shot. In February 1962, Randolph was the primary recovery ship for astronaut John Glenn on his flight, the first American orbital voyage in space. After his historic three-orbit flight, he landed safely near the destroyer Noa from which he was transferred, by helicopter, to Randolph.[1]

On 1 April 1964, in an unusual accident, the Number Three deck elevator of Randolph tore loose from the ship during night operations and fell into the Atlantic off Cape Henry, Virginia, taking with it a Grumman S-2D Tracker, five crewman, and a tractor. Three crew were rescued by the destroyer Holder, but two were lost at sea.[2]

On 7 August 1968, the Defense Department announced that it would deactivate Randolph and 49 other ships to reduce fiscal expenditures in 1969. Randolph decommissioned on 13 February 1969 at Boston Navy Yard and was laid up in the reserve fleet at Philadelphia Naval Shipyard.[1] Randolph was stricken from the Navy List on 1 June 1973.[1] In May 1975, the Defense Reutilization and Marketing Service sold the ship to Union Minerals & Alloys for $1,560,000. Randolph was towed to Kearny, New Jersey, and broken up for scrap. One of her anchors is located on the river front in Toms River, NJ 08753.[citation needed]

This article incorporates text from the public domain Dictionary of American Naval Fighting Ships. The entry can be found here.