The University of Chile (Spanish: Universidad de Chile) is a national and public institution, founded on November 19, 1842 and inaugurated on September 17, 1843.[1] Is the oldest in the country and it is located in the capital, Santiago. It was established as the continuation of the former colonial Royal University of San Felipe (1738)[2] (Spanish: Real Universidad de San Felipe), and has a rich history in academic, scientific and social outreach. The university seeks to resolve national and regional issues that contribute to the development of Chile. It is recognized as one of the best universities in the country, and is in the world top 400, for its leadership and innovation in science, technology, social sciences, and arts through the functions of creation, extension, teaching, and research.

It has more than 1,700,000 m² among its five campuses, research buildings, health care centers, museums, theaters, observatories and sports infrastructure.[3] The institution has more than 38,000 undergraduate and graduate students, offering more than 60 different bachelor and professional degrees, 36 doctoral programs and 119 master programs.[4]

Notable alumni include two Nobel laureates (Pablo Neruda and Gabriela Mistral) and twenty Chilean presidents, among many others.[5]

The world ranking of universities, elaborated by Shanghai JiaoTong University (China) and the European Union based on research sciences indicators, places it among the 400 best universities in the world.[6] The QS University Ranking places the University of Chile as the sixth best university in Latin America and within the 225 best in the world.[7] Scimago Institutions Rankings (SIR) makes a characterization of institutions based on research, innovation and visibility on the web, and in 2014 report on investigation, which included more than 4.500 institutions of higher education and other centers in the world, the University of Chile ranked first in Chile, 12 in Latin America and 437 worldwide.[8] Regarding the indicator of innovation (Innovative knowledge) is located at the top 10 among Latin American and 799 pairs worldwide.[9] In the visibility on the Internet indicator (website size) is also located on site 1 in Chile, 6 in Latin America and 130 among the 4,721 institutions analyzed.[10]

Another study who highlights the performance of this institution is the Ranking Web of Universities (Webometrics) who measures the presence and impact on the web of over 25,000 universities and qualifies this college as leader of the country and the Southern Cone, 3 in Latin America and 152 worldwide.[11]

In version 2015 ranking made by AméricaEconomía, University of Chile won first place at national level with the top rating in quality indicators of research, accreditation, infrastructure and inclusion.[12]

In December 21, 2011 the University of Chile was notified by the National Accreditation Commission (CNA) of the positive evaluation in all obligatory areas (institutional management and undergraduate teaching) and electives (research, teaching graduate and linkage with medium). Thus the University is accredited by seven years, the maximum awarded by the agency, for the period between 2011 and 2018.[13]

The University of Chile and the Catholic University are the only institutions in this country that have the highest accreditation. 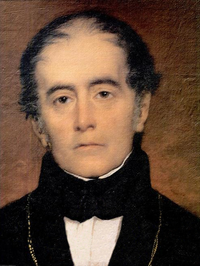 Andrés Bello, founder and first president of the institution. 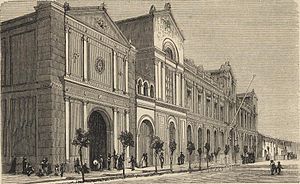 In 1841 the minister of public education, Manuel Montt, conceived the idea of funding a corporation for the "advancement and development of sciences and humanities". Andrés Bello a Venezuelan poet and humanist, formulated the project which with small modifications became a law on 19 November 1842, creating the Universidad de Chile.[1]

The foundation answered the need to modernize the country which a little more than two decades before had become independent from Spain. It replaced the Real Universidad de San Felipe, which was established in 1738.[2]

The University was formally opened on 17 September 1843. During this period, the university consisted of five faculties (facultades): Humanities & Philosophy, Physical & Mathematical Sciences, Law & Political Sciences, Medicine, and Theology. During its first years the University gave considerable support to education, institutional organization – such as the “Civil Code”, a model for America- , the building of the road network to join together the territory, and the energy and production infrastructure.

The institution has also contributed to the formation of the intellectual elites and leaders of the country. Most of the Chilean Presidents have studied in its lecture halls, as well as people with prominent roles in politics, business and culture.

During Augusto Pinochet's military regime from 1973 to 1989, the University experienced many profound changes. On 2 October 1973, Decree number 50 of 1973 stated that the University's Presidents would be designated by the Military Regime.[14]

These changes were orchestrated by influential advisors to the dictatorship as a way to moderate the University's influence on the nation's politics, economics, public policies and intellectual movements, considered leftist by Augusto Pinochet and other right-wing government officials.

In spite of the complete restructuring of the University of Chile, it still remains Chile's most prestigious university in terms of research, applicant preferences and social impact[citation needed].

From this University have graduated, or done academic work, a lots of intellectuals and prominent Chilean leaders, among them, 20 Presidents of the Republic, 172 National Awards and 2 Nobel Prizes.[16] 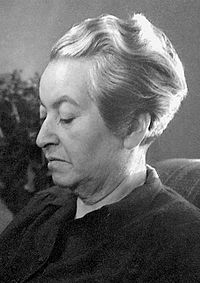 The University had granted her the academic title of Spanish Professor in 1923 to Gabriela Mistral, although her formal education ended before she was 12 years old.

The university community is made up of academics, students and staff collaboration, which perform the tasks that establish its mission and functions.

The University of Chile is organized into five Vice Presidencies:[17] 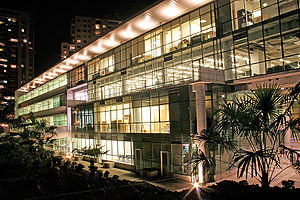 Faculty of Economics and Business Tecnoaulas Building at night 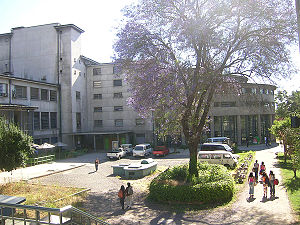 Currently there are 14 faculties and 4 Interdisciplinary Institutes who perform academic tasks undergraduate, graduate, research and extension.

The University of Chile offers undergraduate and graduate programs in all areas of knowledge, whose quality has been recognized by the National Accreditation Commission with the maximum score in both areas (2011-2018).[18]

The University has a total of 66 study programs, 51 of which are conducive to professional degrees and 15 degrees terminales. Alongside this imparts the Academic Bachelor’s Program, which reports directly to the Vice Presidencies of Academic Affairs.[19]

Alongside this the institution was implemented in 2012 an exclusive way of admission call "Sistema de Ingreso Prioritario de Equidad" (SIPEE) for students of public system with special vacancies in all careers. Also, in 2014 the Faculty of Physical and Mathematical Sciences initiated the "Programa de Equidad de Género (PEG)"[21] with special vacancies for the firsts 40 women's applicants who remain on the waiting list.

The University of Chile has the largest and most complex postgraduate system in the country formed with 36 doctoral programs, 119 master's programs, 73 graduate programs and 19 specialized courses.[22] 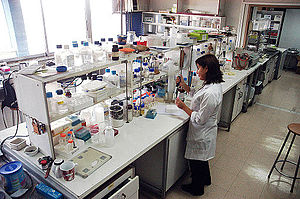 The University of Chile is the main Chilean Institution in scientific and technological research. Is responsible for a third of the scientific publications and also for the implementation of a high percentage of competitive research projects in most academic fields, including basic sciences, technologies, humanities, social sciences and arts.[23]

Projects funded by the "Fund for Scientific and Technological Development" (FONDEF): 39 projects currently ongoing, in the areas of Education, Health, Engineering and Agriculture, Forestry and Animal Sciences. Financed by CORFO (Corporation for Fostering Production):[24] 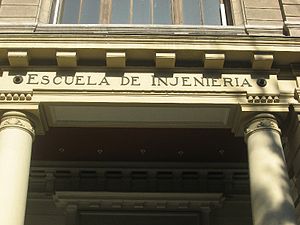 School of Engineering Entrance in Beauchef Campus. The Bello orthography used in it was developed by Andrés Bello.

The institution has 5 campuses, all distributed within the metropolitan area. 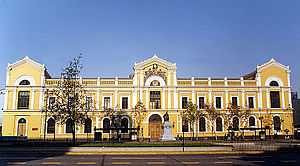 In 1872 was opened this emblematic building with neoclassical frontage that spans in the Alameda Bernardo O'Higgins in Santiago's downtown. The design is work of Lucien Ambroise Henault and Fermín Vivaceta was in charge of the construction.

The catalog has more than 2 million books, journals, theses and other bibliographic records available to 48 libraries of the University. The libraries are distributed in 29.297 square meters, where there are 5.250 reading places and 862 computers for use of the University community.[25] The Digital Library[26] provides access to over 700,000 documents: books, theses, journals and articles, and digitized historical value as maps, manuscripts, sheet music, crafts, photographs, audio and movies objects

The electronic publications of the University of Chile are available freely accessible through the following resources: Institutional Repository,[27] Academic journals[28] and Portal of books.[29] 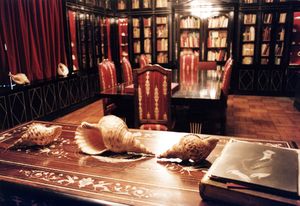 The University of Chile is in charge of a variety of nationwide services and institutions, including:

And more than twenty other centres of national and international importance.