From Infogalactic: the planetary knowledge core
Jump to: navigation, search
This article is about decision trees in machine learning. For the use of the term in decision analysis, see Decision tree.

Decision tree learning uses a decision tree as a predictive model which maps observations about an item to conclusions about the item's target value. It is one of the predictive modelling approaches used in statistics, data mining and machine learning. Tree models where the target variable can take a finite set of values are called classification trees. In these tree structures, leaves represent class labels and branches represent conjunctions of features that lead to those class labels. Decision trees where the target variable can take continuous values (typically real numbers) are called regression trees. 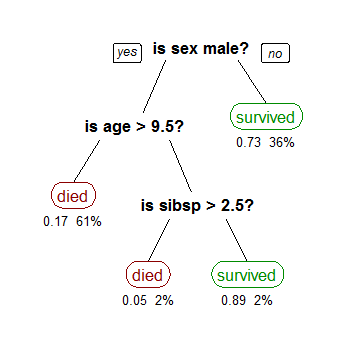 A tree showing survival of passengers on the Titanic ("sibsp" is the number of spouses or siblings aboard). The figures under the leaves show the probability of survival and the percentage of observations in the leaf.

A tree can be "learned" by splitting the source set into subsets based on an attribute value test. This process is repeated on each derived subset in a recursive manner called recursive partitioning. The recursion is completed when the subset at a node has all the same value of the target variable, or when splitting no longer adds value to the predictions. This process of top-down induction of decision trees (TDIDT) [2] is an example of a greedy algorithm, and it is by far the most common strategy for learning decision trees from data.

In data mining, decision trees can be described also as the combination of mathematical and computational techniques to aid the description, categorisation and generalisation of a given set of data.

Data comes in records of the form:

The dependent variable, Y, is the target variable that we are trying to understand, classify or generalize. The vector x is composed of the input variables, x1, x2, x3 etc., that are used for that task.

The term Classification And Regression Tree (CART) analysis is an umbrella term used to refer to both of the above procedures, first introduced by Breiman et al.[3] Trees used for regression and trees used for classification have some similarities - but also some differences, such as the procedure used to determine where to split.[3]

Decision tree learning is the construction of a decision tree from class-labeled training tuples. A decision tree is a flow-chart-like structure, where each internal (non-leaf) node denotes a test on an attribute, each branch represents the outcome of a test, and each leaf (or terminal) node holds a class label. The topmost node in a tree is the root node.

There are many specific decision-tree algorithms. Notable ones include:

ID3 and CART were invented independently at around the same time (between 1970 and 1980)[citation needed], yet follow a similar approach for learning decision tree from training tuples.

Algorithms for constructing decision trees usually work top-down, by choosing a variable at each step that best splits the set of items.[11] Different algorithms use different metrics for measuring "best". These generally measure the homogeneity of the target variable within the subsets. Some examples are given below. These metrics are applied to each candidate subset, and the resulting values are combined (e.g., averaged) to provide a measure of the quality of the split.

Not to be confused with Gini coefficient.

Used by the CART (classification and regression tree) algorithm, Gini impurity is a measure of how often a randomly chosen element from the set would be incorrectly labeled if it were randomly labeled according to the distribution of labels in the subset. Gini impurity can be computed by summing the probability

of each item being chosen times the probability

of a mistake in categorizing that item. It reaches its minimum (zero) when all cases in the node fall into a single target category.

To compute Gini impurity for a set of items, suppose

be the fraction of items labeled with value

Used by the ID3, C4.5 and C5.0 tree-generation algorithms. Information gain is based on the concept of entropy from information theory.

Amongst other data mining methods, decision trees have various advantages:

In a decision tree, all paths from the root node to the leaf node proceed by way of conjunction, or AND. In a decision graph, it is possible to use disjunctions (ORs) to join two more paths together using Minimum message length (MML).[18] Decision graphs have been further extended to allow for previously unstated new attributes to be learnt dynamically and used at different places within the graph.[19] The more general coding scheme results in better predictive accuracy and log-loss probabilistic scoring.[citation needed] In general, decision graphs infer models with fewer leaves than decision trees.

Evolutionary algorithms have been used to avoid local optimal decisions and search the decision tree space with little a priori bias.[20][21]

It is also possible for a tree to be sampled using MCMC.[22]

The tree can be searched for in a bottom-up fashion.[23]