The epiglottal or pharyngeal stop is a type of consonantal sound, used in some spoken languages. The symbol in the International Phonetic Alphabet that represents this sound is ⟨ʡ⟩. 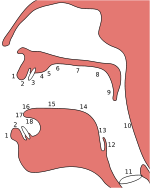 The epiglottis is labelled as "12" in this diagram.

Features of the epiglottal stop: