Eve Arden (April 30, 1908 – November 12, 1990)[2] was an American actress. Her almost 60-year career crossed most media frontiers with both supporting and leading roles, but to younger audiences she may be best-remembered for playing the sardonic but engaging title character, a high school teacher, on Our Miss Brooks, and as the Rydell High School principal in both Grease and Grease 2.

Arden was born Eunice Mary Quedens (pronounced qwi-DENZ) on April 30, 1908 in Mill Valley, California to Charles Peter Quedens, son of Charles Henry Augustus and Meta L. (née Dierks) Quedens, and Lucille (née Frank) Quedens, daughter of Bernard and Louisa (née Mertens) Frank. Her parents divorced when she was a child and she was sent to a Catholic boarding school, and later attended Tamalpais High School, a public high school, until age 16. After leaving school, she joined a stock theater company.[3] She made her film debut, under her real name, in the backstage musical Song of Love (1929). She played a wisecracking showgirl who becomes a rival to the film's star, singer Belle Baker. The film was one of Columbia Pictures' earliest successes.

Her Broadway debut came in 1934, when she was cast in that year's Ziegfeld Follies revue. This was the first role in which she was credited as Eve Arden.

Arden's film career began in earnest in 1937 when she appeared in the films Oh Doctor and Stage Door. Her Stage Door portrayal of a fast-talking, witty supporting character, gained Arden considerable notice and was to be a template for many of Arden's future roles.[4][5]

Her many memorable screen roles include a supporting role as Joan Crawford's wise-cracking friend in Mildred Pierce (1945) for which she received an Academy Award nomination as Best Supporting Actress, and James Stewart's wistful secretary in Otto Preminger's murder mystery, Anatomy of a Murder (1959). (One of her co-stars in that film was husband Brooks West.) She also performed some acrobatics in the Marx Brothers film At the Circus (1939). In 1946 exhibitors voted her the sixth-most promising "star of tomorrow".[6] 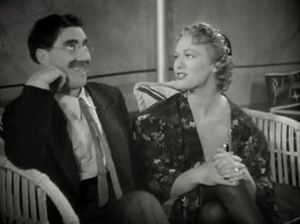 Arden's ability with witty scripts made her a natural talent for radio; she became a regular on Danny Kaye's short-lived but memorably zany comedy-variety show in 1946, which also featured swing bandleader Harry James and gravel-voiced character actor-comedian Lionel Stander.[7]

Kaye's show lasted one season, but Arden's display of comic talent and timing set the stage for her to be cast in her best-known role, Madison High School English teacher Connie Brooks in Our Miss Brooks. Arden portrayed the character on radio from 1948 to 1957, in a television version of the program from 1952 to 1956, and in a 1956 feature film. Arden's character clashed with the school's principal, Osgood Conklin (played by Gale Gordon), and nursed an unrequited crush on fellow teacher Philip Boynton (played originally by future film star Jeff Chandler and, later on radio, then on television, by Robert Rockwell). Except for Chandler, the entire radio cast of Arden, Gordon, Richard Crenna (Walter Denton), Robert Rockwell (Mr. Philip Boynton), Gloria McMillan (Harriet Conklin), and Jane Morgan (landlady Margaret Davis) played the same roles on television.

Arden's portrayal of the character was so popular that she was made an honorary member of the National Education Association, received a 1952 award from the Teachers College of Connecticut's Alumni Association "for humanizing the American teacher", and even received teaching job offers.[2] She won a listeners' poll by Radio Mirror magazine as the top ranking comedienne of 1948–1949, receiving her award at the end of an Our Miss Brooks broadcast that March. "I'm certainly going to try in the coming months to merit the honor you've bestowed upon me, because I understand that if I win this (award) two years in a row, I get to keep Mr. Boynton," she joked. But she was also a hit with the critics; a winter 1949 poll of newspaper and magazine radio editors taken by Motion Picture Daily named her the year's best radio comedienne.[8] 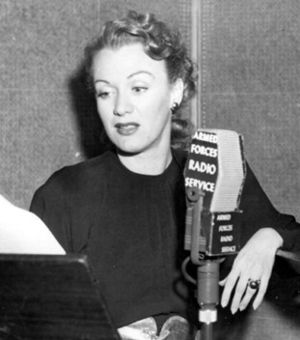 Arden had a very brief guest appearance in a 1955 I Love Lucy episode entitled "Hollywood at Last" in which she played herself. While awaiting their food at The Brown Derby, a Hollywood restaurant, Lucy Ricardo (Lucille Ball) and Ethel Mertz (Vivian Vance) argue over whether a certain portrait on a nearby wall is Shelley Winters or Judy Holliday. Lucy urges Ethel to ask a lady occupying the next booth, who turns and replies, "Neither. That's Eve Arden." Ethel suddenly realizes she was just talking to Arden herself, who soon passes Lucy and Ethel's table to leave the restaurant while the pair gawk. Desilu Productions, jointly owned by Desi Arnaz and Ball during their marriage, was the production company for the Our Miss Brooks television show, which filmed during the same years as I Love Lucy. Ball and Arden became acquainted when they co-starred together in the film Stage Door in 1937. It was Ball, according to numerous radio historians, who suggested Arden for Our Miss Brooks after Shirley Booth auditioned for but failed to land the role and Ball – committed at the time to My Favorite Husband – could not.[9]

Arden tried another series in the fall of 1957, The Eve Arden Show, but it was canceled in spring of 1958 after 26 episodes. In 1966, Arden played Nurse Kelton in an episode of Bewitched. She later co-starred with Kaye Ballard as her neighbor and in-law, Eve Hubbard, in the 1967–69 situation comedy The Mothers-in-Law, which was produced by Desi Arnaz after the dissolution of Desilu Productions.[10]

Arden was one of many actresses to take on the title roles in Hello, Dolly! and Auntie Mame in the 1960s; in 1967, she won the Sarah Siddons Award for her work in Chicago theatre.[11] Arden was cast in 1983 as the leading lady in what was to be her Broadway comeback in Moose Murders. But she wisely withdrew (and was replaced with the much younger Holland Taylor) after one preview performance, citing "artistic differences". The show went on to open and close on the same night, becoming known as one of the most legendary flops in Broadway history.[12]

She became familiar to a new generation of film-goers when she played Principal McGee in both 1978's Grease and 1982's Grease 2, as well as making appearances on such television shows as Bewitched, Alice, Maude and Falcon Crest. In 1985, she appeared as the wicked stepmother in the Faerie Tale Theatre production of Cinderella.

Arden was married to Ned Bergen from 1939 to 1947, and to actor Brooks West from 1952 until his death in 1984 from a heart ailment. She and West had four children, all of whom survived their parents.[4]

On November 12, 1990, Arden died from colorectal cancer and heart disease at her home, 9066 St. Ives Drive, Los Angeles, California, 90069, aged 82. She is interred in the Westwood Village Memorial Park Cemetery, Westwood, Los Angeles, California.[14] Some sources had given 1907 or 1909 as her year of birth, however her gravestone and her death certificate #39019050699, County of Los Angeles Registrar-Recorder/County Clerk in the name of Eve Arden West clearly gives her date of birth as April 30, 1908 and age at death as 82.