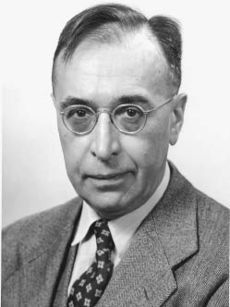 In 1925, while at the Carnegie Institution of Washington, Breit joined with Merle Tuve in using a pulsed radio transmitter to determine the height of the ionosphere, a technique important later in radar development.[3]

Together with Eugene Wigner, Breit gave a description of particle resonant states with the relativistic Breit–Wigner distribution in 1929, and with Edward Condon, he first described proton-proton dispersion. He is also credited with deriving the Breit equation.[4]

In 1934, together with John A. Wheeler, Breit described the Breit–Wheeler process. In 1939 he was elected to the National Academy of Sciences. In April 1940, he proposed to the National Research Council that American scientists observe a policy of self-censorship due to the possibility of their work being used for military purposes by enemy powers in World War II.[5]

During the early stages of the war, Breit was chosen by Arthur Compton to supervise the early design of the first atomic bomb during an early phase in what would later become the Manhattan Project. Breit resigned his position in 1942, feeling that the work was going too slowly and that there had been security breaches on the project; his job went to Robert Oppenheimer, who was later appointed to scientific director of the entire project.

In 2014, experimentalists proposed a way to validate an idea by Breit and John A. Wheeler that matter formation by could be achieved by interacting light particles ("Breit–Wheeler process"). [6]