From Infogalactic: the planetary knowledge core
Jump to: navigation, search
For other uses, see National Academy of Sciences (disambiguation).

As a national academy, new members of the organization are elected annually by current members, based on their distinguished and continuing achievements in original research. Election to the National Academy is one of the highest honors in U.S. science. Members serve pro bono as "advisers to the nation" on science, engineering, and medicine. The group holds a congressional charter under Title 36 of the United States Code.

Founded in 1863 as a result of an Act of Congress that was approved by Abraham Lincoln, the NAS is charged with providing independent, objective advice to the nation on matters related to science and technology. … to provide scientific advice to the government "whenever called upon" by any government department. The Academy receives no compensation from the government for its services.[1]

The National Academy of Sciences is a member of the International Council for Science (ICSU). The ICSU Advisory Committee, which is in the Research Council's Office of International Affairs, facilitates participation of members in international scientific unions and is a liaison for U.S. national committees for the individual scientific unions. Although there is no formal relationship with state and local academies of science, there often is informal dialogue. The Academy is governed by a 17-member Council, made up of five officers (president, vice president, home secretary, foreign secretary, and treasurer) and 12 Councilors, all of whom are elected from among the Academy membership.[4]

Since 2004, the National Academy of Sciences has administered the Marian Koshland Science Museum, to provide public exhibits and programming related to its policy work. The museum's current exhibits focus on climate change and infectious disease. 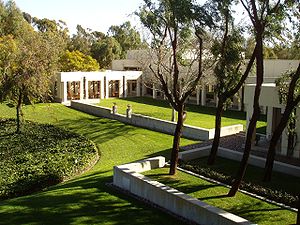 The National Academy of Sciences maintains multiple buildings around the United States.

The historic National Academy of Sciences building is located at 2101 Constitution Avenue, in northwest Washington, DC; it sits on the National Mall, adjacent to the Federal Reserve and in front of the State Department. This neoclassical building by architect Bertram Grosvenor Goodhue was dedicated in 1924[6] and is listed on the National Register of Historic Places. Goodhue enagaged a team of artists and architectural sculptors including Albert Herter, Lee Lawrie, and Hildreth Meiere to design interior embellishments celebrating the history and significance of science.[7] The building is used for lectures, symposia, exhibitions, and concerts, in addition to annual meetings of the NAS, NAE, and NAM. The 2012 Presidential Award for Math and Science Teaching ceremony was held here on March 5, 2014. Approximately 150 staff members work at the NAS Building. In June 2012, it reopened to visitors after a major two-year restoration project which restored and improved the building's historic spaces, increased accessibility, and brought the building's aging infrastructure and facilities up to date.[8]

The NAS also maintains conference centers in California and Massachusetts.[9] The Arnold and Mabel Beckman Center of the National Academies is located on 100 Academy Drive in Irvine, California, near the campus of the University of California, Irvine; it offers a conference center and houses several NAS programs. The J. Erik Jonsson Conference Center located at 314 Quissett Avenue in Woods Hole, Massachusetts, is another conference facility.

The Act of Incorporation, signed by President Abraham Lincoln on March 3, 1863, created the National Academy of Sciences and named 50 charter members. Many of the original NAS members came from the so-called "Scientific Lazzaroni", an informal network of mostly physical scientists working in the vicinity of Cambridge, Massachusetts (c. 1850).[11] 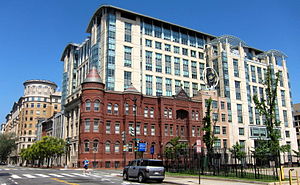 In 1863, enlisting the support of Alexander Dallas Bache and Charles Henry Davis, a professional astronomer recently recalled from the Navy to Washington to head the Bureau of Navigation, Louis Agassiz and Benjamin Peirce planned the steps whereby the National Academy of Sciences was to be established. Senator Henry Wilson of Massachusetts was to name Agassiz to the Board of Regents of the Smithsonian Institution.[12]

Agassiz was to come to Washington at the government's expense to plan the organization with the others. This bypassed Joseph Henry, who was reluctant to have a bill for such an academy presented to Congress. This was in the belief that such a resolution would be "opposed as something at variance with our democratic institutions". Nevertheless, Henry soon became the second President of NAS. Agassiz, Davis, Peirce, Benjamin Gould, and Senator Wilson met at Bache's house and "hurriedly wrote the bill incorporating the Academy, including in it the name of fifty incorporators".[13]

During the last hours of the session, when the Senate was immersed in the rush of last minute business before its adjournment, Senator Wilson introduced the bill. Without examining it or debating its provisions, both the Senate and House approved it, and President Lincoln signed it.[13]

Although hailed as a great step forward in government recognition of the role of science in American civilization, the National Academy of Sciences at the time created enormous ill-feelings among scientists,[13] whether or not they were named as incorporators.

[T]he Academy shall, whenever called upon by any department of the Government, investigate, examine, experiment, and report upon any subject of science or art, the actual expense of such investigations, examinations, experiments, and reports to be paid from appropriations which may be made for the purpose, but the Academy shall receive no compensation whatever for any services to the Government of the United States.

— An Act to Incorporate the National Academy of Sciences, [14]

The National Academy did not solve the problems facing a nation in Civil War as the Lazzaroni had hoped, nor did it centralize American scientific efforts.[13]

In 1870, the congressional charter was amended to remove the limitation on the number of members.[15]

In 2013, astrophysicist Neil deGrasse Tyson was asked to write a speech for the 150th anniversary of the Gettysburg Address in which he made the point that one of Lincoln's greatest legacies was establishing the National Academy of Sciences in that same year, which had the longterm effect of "setting our Nation on a course of scientifically enlightened governance, without which we all may perish from this Earth".[16]

Presidents of the National Academy of Sciences

The President is the head of the Academy, elected by a majority vote of the membership to serve in this position for a term to be determined by the governing Council, not to exceed six years, and may be re-elected for a second term. The Academy has had 21 presidents since its foundation. The current President is atmospheric chemist, Ralph J. Cicerone, formerly of the University of California, Irvine, whose term expires June 30, 2016.[17]

The Academy gives a number of different awards:

In 2005, the national science academies of the G8 nations (including the National Academy of Sciences) plus science academies of Brazil, China, and India (three of the largest emitters of greenhouse gases in the developing world) signed a statement on the global response to climate change. The statement stresses that the scientific understanding of climate change had become sufficiently clear to justify nations taking prompt action.[18][19]

On 7 May 2010, a letter signed by 255 Academy members was published in Science magazine, decrying "political assaults" against climate change scientists.[20][21] This responded to a civil investigative demand being served on the University of Virginia by Virginia Attorney General Ken Cuccinelli, seeking a broad range of documents from Michael E. Mann, who was formerly an assistant professor there from 1999-2005.[22][23] Mann, who currently works at Penn State, is a climate change researcher, and Cuccinelli alleges that Mann may have defrauded Virginia taxpayers in the course of his environmental research. Investigations had cleared Mann of charges that he falsified or suppressed data.[24]