From Infogalactic: the planetary knowledge core
Jump to: navigation, search
This article is about a linguistic category. For the property category, see Inalienable possessions.

In linguistics, inalienable possession is a type of possession in which a noun is obligatorily possessed by its possessor. Nouns or nominal affixes in an inalienable possession relationship cannot exist independently or be "alienated" from their possessor.[1] For example, a hand implies "(someone's) hand", even if it is severed from the whole body. Likewise, a father implies "(someone's) father". Inalienable nouns include body parts (e.g. leg, which is necessarily "someone's leg"), kinship terms (e.g. mother), and part-whole relations (e.g. top).[2] Many languages reflect this distinction, but they vary in the way they mark inalienable possession.[3] Cross-linguistically, inalienability correlates with many morphological, syntactic, and semantic properties.

Statistically, 15–20% of the world's languages have obligatory possession.[3]

Bernd Heine argues that linguistic change is responsible for this language-specific variability in categorization. This is because "rather than being a semantically defined category, inalienability is more likely to constitute a morphosyntactic or morphophonological entity, one that owes its existence to the fact that certain nouns happened to be left out when a new pattern for marking attributive possession arose."[7] Under this view, nouns that are "ignored" by a new marking pattern come to form a separate noun class.

Morphosyntactic strategies for marking the distinction

de Jean is a postnominal possessor – it occurs after the noun. Sentence adapted from Guéron 2007: 590 (1a)

By contrast, English generally uses a prenominal possessor (e.g. John's brother). However, in select situations it may also use a postnominal possessor, as in the brother of John.[3]

No overt possessive markers

The South American language Dâw uses a special possessive morpheme (bolded in the examples below) to indicate alienable possession:[10]

The possessive morpheme ɛ̃̀ɟ in examples (3) and (4) indicates an alienable relationship between possessor and possessee.

Igbo, a West African language, deletes the possessor when the sentence's subject and the possessor of an inalienable noun refer to the same entity.[11] In (6a), both the referents are the same; however, it is ungrammatical to keep both of them in a sentence. Igbo employs the processes of identical possessor deletion, and the yá (his), is dropped, as in the grammatical (6b).

The distinction between alienable and inalienable possession constructions may be marked with a difference in word order. Igbo uses another syntactic process when the subject and the possessor refer to different entities.[11] In possessor switch, the possessor of the inalienable noun is placed as close as possible to the verb.[11] In the following examples, the possessor yá is not deleted because the two referents in this sentence are different.

Maybrat, a language from New Guinea, varies the order of the genitive and the noun between alienable and inalienable constructions:[12][13]

In (9), the genitive Sely precedes the possessee me, marking inalienable possession.

Another way languages distinguish between alienable and inalienable possession is to have one noun class that cannot appear without an explicit possessor.[3] For example, Ojibwe, an Algonquian language, has a class of nouns that must have explicit possessors.[14][15][lower-alpha 2]

However, the distinction between a (alienable of) and o (inalienable of) is used for other semantic distinctions less clearly attributable to common alienability relationships except in metaphorical ways. Although lei is a tangible object, in Hawaiian this noun can be either alienable (15a) or inalienable (15b) depending on the context.

More subtle cases of syntactic patterns sensitive to alienability are found in many languages. For example, French can use a definite article rather than the possessive (ses) with body parts.[17]

Using the definite article with body parts, as in the example above, it creates ambiguity. This sentence has both an alienable and an inalienable interpretation:

This type of ambiguity also occurs in English with body part constructions.[18]

German uses a definite article (die) for the inalienable body part construction, but a possessive (meine) for alienable possession.[19]

No distinction in the grammar

Since the alienability distinction is rooted in semantics, in languages like English where there are few morphological or syntactic distinctions sensitive to alienability, ambiguities occur. For example, the phrase she has her father's eyes has two different meanings:

Syntactically, Noam Chomsky proposed that some genitives or possessive cases originate as part of the determiner in the underlying structure.[21] The inalienable possessives are derived from a different deep structure than that of alienable possession. For example, given the following interpretations of the phrase John’s arm:

In contrast, others have argued that although semantics does play a role in inalienable possession, it is not central to the syntactic class of case-derived possessives. For example, compare the difference between the book’s contents and the book’s jacket. While a book cannot be divorced from its contents, it can be removed from its jacket.[21] Regardless, both phrases have the same syntactic structure. Another example is Mary’s mother versus Mary’s friend. The mother will always be Mary’s mother, but an individual might not always be Mary’s friend. Again, both have the same syntactic structure.

The distinction between alienable and inalienable possessions can be influenced by cognitive factors.[2] Languages, such as English, that do not encode the alienability distinction in their grammar rely on the real-world relationship between the possessed noun and possessor noun. Nouns that are “inherently relational” and whose possession is associated with a single, dominant interpretation (e.g. mother), are of the inalienable type, whereas nouns whose possession is open to interpretation (e.g. car), are of the alienable type.[2]

Although there are different methods of marking inalienability, inalienable possession constructions usually involve the following features:[4] 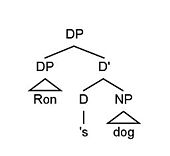 Attribution possession: the possessor (Ron) and the possesee (dog) form a phrase.

Predicative possession: the possessor (Ron) and the possesee (dog) do not form a phrase but instead form a clause.

Theories of representation in syntax 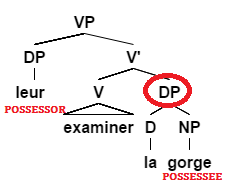 External possession in French. The possessor is outside the phrase that contains the possessee (circled in red). Sentence adapted from Vergnaud and Zubizarreta 1992: 596 (4b)

Internal possession in French. The possessor and possessee are contained inside the same phrase (circled in red). Sentence adapted from Vergnaud and Zubizarreta 1992: 596 (6b) 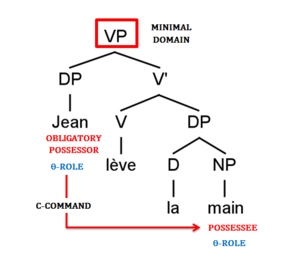 Inalienable possession binding: The possessor c-commands the possessee in its domain. The possessor and possessee constitute a lexical chain and receive the same theta-roles from the verb.

This hypothesis, however, does not account for verbs allowing reflexive anaphora (e.g. Jean se lave 'Jean washes himself').[9] To account for the grammaticality of such verbs, Guéron proposes that in an inalienable construction the POSS DP (possessor DP) and BP DP (body part DP) constitute two links of a lexical chain, in addition to their anaphoric relation.[9] The two links of a lexical chain must obey the same constraints as anaphora, which accounts for the locality restrictions on inalienable construals. Every chain is then associated with one theta-role. Inalienable possession surfaces as ungrammatical when the possessed DP and the possessor DP are assigned two different theta-roles by the verb. This explains why sentence (24b) is ungrammatical. The POSS DP is assigned an agent theta-role, while the BP DP is assigned a theme theta-role.

Landau's analysis is made on the basis of several properties possessives in the data case in Romance languages.[17] 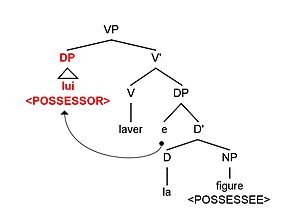 Illustration of possessor-raising in French. Sentence adapted from (Guéron 2007: 611 (100b)

According to Guéron, a benefit of this hypothesis is that it is consistent with principles of syntactic movement such as locality of selection and c-command. If the position it needs to move to is already filled, as with a transitive verb like see, the possessor cannot raise, and the sentence is correctly predicted as ungrammatical.[9]

However, some languages such as Russian do not have to raise the DP possessor and can leave it in situ, making it unclear why the possessor would ever have to raise.[9] Possessor-raising also violates a constraint on syntactic movement, the specificity constraint: an element cannot be moved out of a DP if that DP is specific.[9] In (23), the DP lui is specific, yet possessor-raising predicts it can be moved out of the larger DP lui la figure. Such movement is excluded by the specificity constraint.

Inalienable possession constructions often lack overt possessors.[24] There is debate as to how to account for this cross-linguistic universal difference in form. Iconicity explains this in terms of the relationship between the conceptual distance between the possessor and possessee,[28] while economy explains this through frequency of possession.[29]

However, there are cases where linguistic distance does not necessarily reflect conceptual distance. In Mandarin, there are two ways to express the same type of possession, POSSESSOR + POSSESSEE and POSSESSOR + de + POSSESSEE; the latter has more linguistic distance between the possessor and possessee, yet it reflects the same conceptual distance.[30] Both possessive expressions, with and without the marker de, are found in the Mandarin phrase of "my friend", seen in (28a) compared to (28b):[31]

In contrast to the previous example, omission of the marker de is ungrammatical, as in example (29b). The linguistic distance between the possessor and possessee is much smaller for the example in (29b) than in (29a). It has been argued that omission of de only occurs in kinship relationships, whereas phrasal constructions with a mandatory de encompasses other inalienable possession examples such as body parts.[28]:783 This contradicts the notion that inalienable possession is marked by less linguistic distance between the possessor and possessee.

The following shows the frequency of possession between alienable and unalienable nouns in German.[32] The table below shows the number of times each noun occurred with or without a possessor in texts from the German Goethe-Corpus, comprising works by Johann Wolfgang von Goethe.