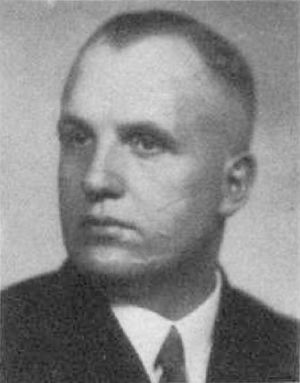 Gerland was born in Gottsbüren (now a part of Trendelburg) near Kassel. He joined the Nazi Party in 1929. As of 1930, he was district leader in Kreis Hofgeismar, and beginning in 1932, he was acting propaganda leader in the Gau of Kurhessen. From 1933 he was leader of the provincial post in Kurhessen of the Propagandaministerium and worked as office leader from October 1934 in the Party Chancellery.

From 13 December 1943, until 1945, Gerland was Gauleiter in Kurhessen. He succeeded the former Gauleiter Karl Weinrich, who had been removed from his post. From 1944 to 1945, Gerland was also Oberpräsident ('High President') of Kurhessen after it became a separate province of Prussia in April 1944; previously Kurhessen was a Gau (Hesse-Nassau Nord) within Hesse-Nassau, but in 1944 it was separated from what then became known as the province of Nassau. (See the article in German on 'Provinz Kurhessen'). In the spring of 1945 Gerland received high praise from Joseph Goebbels. In his diary entry of 2 April 1945 Goebbels noted that Gerland was conducting himself "superbly," adding, "I would have expected this from [him] anyway." Later that month, Gerland was killed at Frankfurt (Oder) during fighting on the Eastern Front.