Merian Caldwell Cooper was born to John C. Cooper, an American of English descent, and the former Mary Caldwell, in Jacksonville, Florida. He was educated at The Lawrenceville School in New Jersey and entered the U.S. Naval Academy in 1912 but resigned in 1915 (his senior year) in a dispute over his belief in air power which the Navy did not share. In 1916, he joined the Georgia National Guard to help chase Pancho Villa in Mexico.

Cooper served as a DH-4 bomber pilot with the United States Army Air Service during World War I. He was shot down and captured by the Germans, serving out the remainder of the war in a POW camp.[1] Captain Cooper remained in the Air Service after the war, despite serious burns to his arms incurred in the crash of his DH-4. In January 1919, while on special duty with the American Red Cross in France, he located the grave of Lieutenant Frank Luke, Jr., America's second-highest-scoring ace of World War I, near the village of Murvaux. 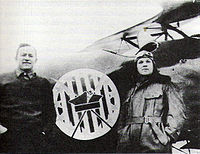 From late 1919 until the 1921 Treaty of Riga, Cooper was a member of a volunteer American flight squadron, the Kościuszko Squadron, which supported the Polish Army in the Polish-Soviet War. On July 26, 1920, his plane was shot down, and he spent nearly 9 months in a Soviet prisoner of war camp, where he was interviewed by the writer Isaac Babel.[2] He escaped just before the war was over and made it to Latvia. For valor he was decorated by Polish commander-in-chief Józef Piłsudski with the highest Polish military decoration, the Virtuti Militari.

During his time as a POW, Cooper wrote an autobiography: Things Men Die For by "C". He turned the manuscript over to Dagmar Matson to type for publisher submission. It was submitted to G. P. Putnam's Sons in New York (the Knickerbocker Press) in 1927 and published that same year. Just after the book's release, he changed his mind about releasing the personal details about "Nina" (Małgorzata Słomczyńska, his out of wedlock relation in Poland) and asked Dagmar to buy up every copy that she could find. She managed to acquire most of the 5,000 copies that had been released. Cooper and Dagmar each kept a copy, while the rest were eventually destroyed. Dagmar sent Nina money every month, on behalf of Cooper, until his death.

Cooper was a founding member of the board of directors of Pan American Airways, serving on the board for decades. He was a pioneer in the use of aircraft, military and civilian. During his tenure at Pan Am, the company established the first regularly scheduled transatlantic service.

He re-enlisted and was commissioned a colonel in the U.S. Army Air Forces. He served with Col. Robert L. Scott in India as a logistics liaison for the Doolittle Raid. They then went to Dinjan Airfield, Assam, and with Col. Caleb V. Haynes, a bomber pilot, set up the Assam-Burma-China Ferrying Command, which was the origin of The Hump Airlift. He later served in China as chief of staff for General Claire Chennault of the China Air Task Force – precursor of the Fourteenth Air Force – then from 1943 to 1945 in the Southwest Pacific as chief of staff for the Fifth Air Force's Bomber Command.

Leading many missions and carefully planning them to minimize loss of life, he was known for his hard work and relentless planning. At the end of the war, he was promoted to brigadier general. For his contributions, he was also aboard the USS Missouri to witness Japan's surrender.

In the 1950s he supported Joseph McCarthy in his crusade to root out Communists in Hollywood and Washington, D.C.[3] Cooper died of cancer in San Diego.[4]

Cooper started his film career with documentaries for Paramount Pictures such as Grass (1925) and Chang (1927), which combined real footage with staged sequences. In Chang, he used this technique to create a memorable finale featuring an elephant stampede. His movie The Four Feathers was filmed among the fighting tribes of the Sudan.[1] 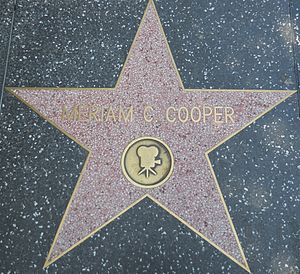 Star on Hollywood Walk of Fame, at 6525 Hollywood Blvd., with first name misspelled

Throughout his career, Cooper was a proponent of technical innovation. The film King Kong, which he co-wrote, co-directed, and appeared in, was a breakthrough in this regard. Another outstanding film that he produced in trying to follow up on his success with King Kong was the 1935 film She. Additionally, Cooper helped pave the way for such ground-breaking technologies as Technicolor and the widescreen process Cinerama.

Cooper was also the executive producer for The Searchers (1956), again directed by Ford.

For his military service to Poland, Cooper was awarded the Silver Cross of the Order of Virtuti Militari (presented by Piłsudski), and Poland's Cross of Valour.

In 1949 Mighty Joe Young won an Academy Award for Best Visual Effects, which was presented to Cooper as producer (the Academy's custom at the time); but Cooper gave the Oscar to Willis O'Brien, the man actually responsible for the film's special effects.

Cooper was awarded an honorary Oscar for lifetime achievement in 1952. His film The Quiet Man was nominated for Best Picture that year, but lost to Cecil B. DeMille's The Greatest Show on Earth.

Cooper has a star on the Hollywood Walk of Fame, though his first name is misspelled "Meriam".

An Interbellum Polish film directed by Leonard Buczkowski, Gwiaździsta eskadra (The Starry Squadron), was inspired by Cooper's experiences as a Polish Air Force officer during the Polish-Soviet War of 1919–21. The film was made with the cooperation of the Polish army and was the most expensive Polish film prior to World War II. After World War II, all copies of the film in Poland were destroyed by the Soviets.