From Infogalactic: the planetary knowledge core
Jump to: navigation, search
This article is about the biblical Methuselah. For other uses, see Methuselah (disambiguation).

Methuselah (Hebrew: מְתוּשֶׁלַח / מְתוּשָׁלַח, Modern Metušélaħ / Metušálaħ Tiberian Məṯûšélaḥ / Məṯûšālaḥ ; "Man of the dart/spear", or alternatively "his death shall bring judgment"[1]) is the man reported to have lived the longest at the age of 969 in the Hebrew Bible.[2] Extra-biblical tradition maintains that he died on the 11th of Cheshvan of the year 1656AM (Anno Mundi, after Creation), seven days before the beginning of the Great Flood.[3] Methuselah was the son of Enoch, the father of Lamech, and the grandfather of Noah.

Methuselah is mentioned in one passage in the Hebrew Bible, Genesis 5:21–27, as part of the genealogy linking Adam to Noah. The genealogy is repeated, without the chronology, at 1Chronicles 1:3, and at Luke 3:37. The following is taken from the King James Version of the Bible.

The verses are available in three manuscript traditions, the Masoretic, the Septuagint and the Samaritan Torah. The three traditions do not agree with each other. The differences can be summarized as follows:[4]

There have been numerous attempts to account for these differences – the most obvious being accidental corruption by copyists and translators. Some errors may be the result of mistaken attempts to correct previous errors. Gerhard Larsson has suggested that the rabbis who translated the Septuagint from Hebrew to Greek in Alexandria around the 3rd century BC, aware that the Egyptian historian Manetho makes no mention of a Deluge, lengthened the patriarchs' ages to push back the time of the flood to before the first Egyptian dynasty.[5]

Methuselah appears in two important Jewish works from the 3rd and 2nd centuries BC. In the Book of Enoch,[6] Enoch (as the narrator) tells Methuselah of the coming worldwide flood and of the future Messianic kingdom. He is known having a great sword (Sword of Methuselah) that conquers evils and ghosts. The Book of Jubilees names Methuselah's mother and his wife – both are named Edna – and his daughter-in-law, Betenos, Lamech's wife.

The 17th century midrashic Sefer haYashar ("Book of Jasher")[7] describes Methuselah with his grandson Noah attempting to persuade the people of the earth to return to godliness.[8] All other very long-lived people died, and Methuselah was the only one of this class left.[9] God planned to bring the flood after all the men who walked in the ways of the Lord had died (besides Noah and his family).[10] Methuselah lived until the ark was built, but died before the flood, since God had promised he would not be killed with the unrighteous.[9] The Sefer haYashar gives Methuselah's age at death as 960[11] and does not synchronize his death with the flood.

The Sumerian king list mentions a character named Ubara-Tutu who seems almost identical to Methuselah. He was the son of En-men-dur-ana the Sumerian Enoch, and king of Sumer until the flood swept over the land. Although their ages are different their father and year of death remain the same.[12]

For more details on this topic, see Biblical longevity. 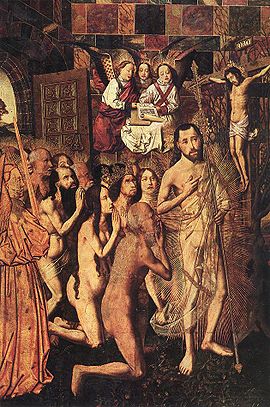 Bartolomé Bermejo, Christ Leading the Patriarchs to Paradise, c. 1480. In this depiction of the Harrowing of Hell, Methuselah is portrayed as leading the procession of the righteous behind Christ, along with Solomon, the Queen of Sheba, Adam and Eve.

The meaning of Methuselah's age has engendered considerable speculation, but no widely accepted conclusions. These speculations can be discussed under four categories and their combinations: literal, mistranslation, symbolic, and fictional interpretations.

Interpretations of the Bible following Biblical literalism take Methuselah's 969 years to be 969 solar years. Some literalists suggest certain pseudoscientific arguments for how this could be: early humans had a better diet, or a water vapor canopy protected the earth from radiation before the Flood.[13] Others introduce theological causes: humans were originally to have everlasting life, but sin was introduced into the world by Adam and Eve, its influence became greater with each generation, and God progressively shortened human life, particularly after the Flood.[14]

Some believe that Methuselah's extreme age is the result of an ancient mistranslation that converted "months" to "years", producing a more credible 969 lunar months, or 78½ years,[15] but the same calculation applied to Enoch would have him fathering Methuselah at the age of 5[16] using numbers from the Masoretic Text. Donald V. Etz suggested that the Genesis 5 numbers "might for convenience have all been multiples of 5 or 10".[17] If the Septuagint numbers are divided by 10, Enoch's 165 when he fathered his son would be 16½ years, and Methuselah's 969 when he died would be 96.9 years.

Ellen Bennet argued that the Septuagint Genesis 5 numbers are in tenths of years, which "will explain how it was that they read 930 years for the age of Adam instead of 93 years, and 969 years for Methuselah instead of 96 years, and 950 years for that of Noah instead of 95 years"... "Surely it is much more rational to conclude that Noah lived 50 years instead of 500 years before he took a wife and begat Shem, Ham, and Japheth." and lists the Septuagint total ages with decimal points: 93.0 for Adam, 91.0 for Cainan, 96.9 for Methuselah, 95.0 for Noah, etc.[18] Robert M. Best provided a similar table of the same Septuagint Genesis 5 numbers with decimal points inserted in the same tenth position.[19]

Methuselah's father Enoch, who does not die but is taken by God, is the seventh patriarch, and Methuselah, the eighth, dies in the year of the Flood, which ends the ten-generational sequence from Adam to Noah, in whose time the world is destroyed.[20]

The word "Methuselarity" was coined by Aubrey de Grey to mean a future point in time when all of the medical conditions that cause human death would be eliminated and death would occur only by accident or homicide.[24]

The term "Methuselah" is used extensively in modern times and in popular culture. See Methuselah (disambiguation).