Municipalities and communities of Greece

The municipalities of Greece (Greek: δήμοι - dimoi) are the lowest level of government within the organizational structure of that country. Since the 2011 Kallikratis reform, there are 325 municipalities. Thirteen regions form the largest unit of government beneath the State. Within these regions are 74 second-level areas called regional units. Regional units are then divided into municipalities. The new municipalities can be subdivided into municipal communities (δημοτικές κοινότητες - dimotikes koinotites) or local communities (τοπικές κοινότητες - topikes koinotites).[1]

Constitutional provisions for communities and municipalities

Article 102 of the Greek constitution outlines the mandate of municipalities and communities and their relationship to the larger State:

Organization of communities and municipalities 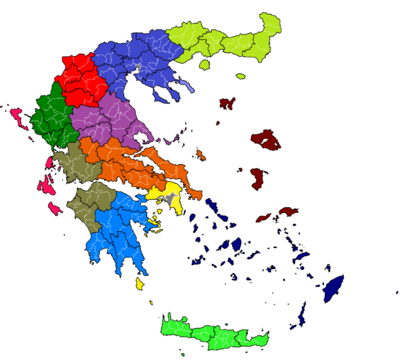 Administrative division of Greece following the "Kallikratis" reform: each colour denotes a region, regional units are outlined in black, and municipalities in white

Communities are governed by a community council (simvoulio) made up of 7 to 11 members and led by a community president (proedros kinotitas). A deputy chairperson from a communal quarter (if the community has been further divided) may also take part in council meetings when specific issues of a communal interest are being discussed.

A municipal council (dimotiko simvoulio) and town hall committee led by a mayor (dimarchos) governs municipalities. Depending on the size of the municipality, municipal councils are made up of anywhere from 11 to 41 council members representing "municipal departments" (many of which were small communities that had been merged into the municipality). In addition, the council elects 2 to 6 town hall committee members. In the case of mergers, local village or town councils (like communal quarters) may still exist to provide feedback and ideas to the larger governing body.

Council members are elected via public election every four years on the basis of a party system. Three-fifths of all seats go to the party winning a plurality of the vote and the remaining two-fifths of the seats go to other parties based on their share of the vote on a proportional basis. The municipal council elects the town hall committee for a term of two years.

The State ultimately oversees the actions of local governments, but the Municipal and Communal Code still provides communities and municipalities with legal control over the administration of their designated areas.

Participation of citizens in local decision-making

Citizens have very few opportunities for direct participation in decision-making outside the elections held every four years. Beyond national referendums that may be called for critical issues, citizens cannot request local referendums. The only other possibility for direct input by citizens is if the local municipality establishes district councils or if the community president calls a people's assembly to discuss issues of concern. The organization of these public opportunities, however, is solely at the discretion of the community or municipal leadership.

Revenues come from both ordinary and extraordinary sources.

Ordinary revenue is derived from the State budget, property revenues, and established taxes and fees. By law, the State funds first level governments on the basis of a fixed formula: 20% of legal persons’ income tax, 50% of traffic duties and 3% of property transfer duties. For smaller populated communities and municipalities, the State has also allocated additional revenue based on other expenses (e.g. the cost of supplying water, maintaining road networks, and climate). Local governments are required to direct any property or resource fees to related expenses (e.g. drinking water fees must go towards the maintenance and improvement of the water system). Other forms of taxation or fines (e.g. parking fees) can be used wherever the government deems necessary.

Income generation is not limited to traditional service sources. Local governments can also initiate or participate in entrepreneurial activities that include a wide range of possible partnerships.

Each year communities and municipalities formulate their budgets in terms of expected revenues and expenses. Financial management and auditing is then based on this plan.

History of community and municipal governments