From Infogalactic: the planetary knowledge core
Jump to: navigation, search
This article is about a wife of Socrates. For one of the figures in Greek mythology, see Myrto (mythology). 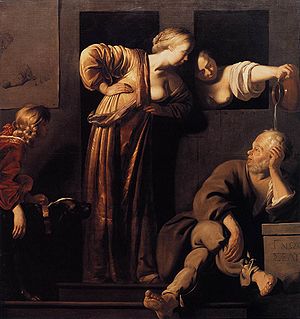 Socrates and his two wives. Painting by Reyer van Blommendael

Myrto (/ˈmɜːrtoʊ/; Greek: Μυρτώ; fl. 5th century BC) was, according to some accounts, a wife of Socrates.

The original source for the claim that she was Socrates' wife appears to have been a work by Aristotle called On Being Well-Born,[1][2][3] although Plutarch expresses doubt that the work is genuine. She was apparently the daughter,[3] or, more probably, the granddaughter of Aristides.[2]

Although Diogenes Laërtius describes Myrto as Socrates' second wife living alongside Xanthippe, Myrto was presumably a common-law wife,[4] and Plutarch describes Myrto as merely living "together with the sage Socrates, who had another woman but took up this one as she remained a widow due to her poverty and lacked the necessities of life."[2] Athenaeus and Diogenes Laërtius report that Hieronymus of Rhodes attempted to confirm the story by pointing to a temporary decree the Athenians passed:

For they say that the Athenians were short of men and, wishing to increase the population, passed a decree permitting a citizen to marry one Athenian woman and have children by another; and that Socrates accordingly did so.

Neither Plato nor Xenophon mention Myrto, and not everyone in ancient times believed the story: according to Athenaeus, Panaetius "refuted those who talk about the wives of Socrates."[1]