He graduated from the Royal Military College of Canada in Kingston, Ontario in 1956, student # 3528.

Manson joined the Royal Canadian Air Force in 1952 and graduated from Royal Military College of Canada in 1956.[1] He received his wings in 1957 and, as a junior officer, served as a fighter pilot in Germany and Canada. He served as Commanding Officer of 441 Tactical Fighter Squadron before becoming program manager of the New Fighter Aircraft project (which led to the selection of the CF-18 Hornet) in 1977.[1] He went on to be Commander 1 Canadian Air Group in 1980, Commander, Air Command in 1983 and Assistant Deputy Minister in the Department of National Defence in 1985.[2] His last appointment was as Chief of the Defence Staff in 1986 before retiring in 1989.[2]

Following military service he was the president of Paramax, a Montreal-based aerospace company, eventually retiring from business as chairman of Lockheed Martin Canada.[2] in 1997. 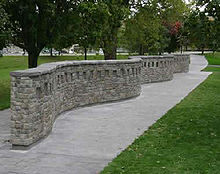 In 1981, he was made a Commander of the Order of Military Merit. In 2002, he was made an Officer of the Order of Canada for being "an exemplary and inspirational military leader, business executive and volunteer" and for having "served his country with honour and distinction".[3] He was a recipient of the Vimy Award, which recognizes a Canadian who has made a significant and outstanding contribution to the defence and security of our nation and the preservation of our democratic values.[4] In 2009, Manson was added to the wall of honour at the Royal Military College of Canada. [5]

In January 2011 Manson, along with retired Lieutenant-General Angus Watt, wrote a vigorous defence of Canada's proposed purchase of the Lockheed Martin F-35 Lightning II for the media, entitled The truth about those jets. In the article Manson indicated that he was a former Chief of Defence Staff but neglected to mention his former chairmanship of Lockheed Martin Canada, a wholly owned subsidiary of Lockheed Martin, the F-35's manufacturer. Steven Staples, President of the Rideau Institute, in pointing this relationship out said "While this fact in no way disqualifies the generals from sharing their opinion, it is an important truth about the F-35 debate that the stealth fighters' strongest backers are the military and the aerospace companies. In fact, it's getting awfully hard to tell them apart."[6][7]

In April 2011 the Ottawa Citizen published a letter written by Manson in which he clarifies that he was Chairman of Lockheed Martin in 1996-1997 as the result of the acquisition of Loral Canada, of which he was president, by Lockheed Martin Corporation. Manson pointed out that, during his short time in that position, he never at any time discussed the F-35 with anyone from Lockheed Martin.[8]