The political commissar (also politruk Russian: политрук from политический руководитель: political officer) is the supervisory political officer responsible for the political education (ideology) and organization, and committed to the civilian control of the military. Historically, the commissaire politique (political commissary) first appeared in the French Revolution (1789–99), guarding it against anti-Revolutionary thought and action, and so ensuring the Republican victory.[1] 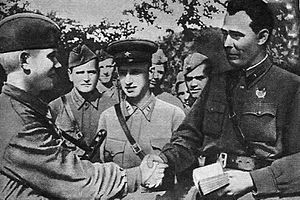 The political supervision of the Russian military was effected by the political commissar, who was introduced to every unit and formation, from company- to division-level, including the navy. Revolutionary Military Councils (or Revvoyensoviets- RVS) were established at army-, front-, fleet-, and flotilla-level, comprising at least three members — commander and two political workers. The political workers were denominated "members of the RVS", not "commissars", despite being official political commissars.

In 1919, the title politruk (Russian: политрук, from политический руководитель, political leader) was assigned to political officers at company level. Despite being official political commissars, they were not addressed as "commissar". Beginning in 1925, the politico-military doctrinal course towards edinonachalie (Russian: единоначалие, single command) was established, and the political commissar, as a military institution, was gradually abolished. The introduction of edinonachalie was twofold, either the military commander joined the Communist Party and became his unit’s political officer, or a pompolit (Russian: помполит, assistant commander for political work) officer was commissioned sub-ordinate to him. Earlier, in 1924, the RVSs were renamed as Military Councils, such high-level political officers were known as ChVS (Chlen Voennogo Soveta, Member of the Military Council), they were abolished in 1934.

On 10 May 1937 the political commissar was reinstated to the Red Army, and Military Councils were created. These events derived from the political purges that began in the Soviet armed forces. Again, in August 1940, the political commissars was abolished, yet the Military Councils continued throughout the German-Soviet War (1941–45), and afterwards. Below army level, the edinonachalie (single command) system was restored. In July 1941, consequent to the Red Army’s defeats at war’s start, the position of political commissar reappeared. The commissar had an influential role as a "second commander" within the military units during this time. Their ranks and insignia generally paralleled those of officers.[2] When this proved less-than-effective, General Konev asked Stalin to subordinate the political officer to commanding officers: the commissars' work was refocused to morale-related functions. The term "commissar" itself was formally abolished in August 1942, and at the company- and regiment-level, the pompolit officer was replaced with the zampolit (deputy for political matters). Though no longer known by the original "commissar" title, political officers were retained by all the Soviet armed forces, e.g., Soviet Army, Soviet Navy, Soviet Air Force, Soviet Strategic Rocket Forces, et al, until the Soviet dissolution in 1991.

The position of political commissar (Chinese: 政戰官) also exists in the Republic of China Army of the Republic of China (Taiwan). Chiang Ching-kuo, appointed as Kuomintang (Chinese Nationalist Party) director of Secret Police in 1950, was educated in the Soviet Union, and initiated Soviet style military organization in the Republic of China Military, reorganizing and Sovietizing the political officer corps, surveillance, and Kuomintang party activities were propagated throughout the military. Opposed to this was Sun Li-jen, who was educated at the American Virginia Military Institute.[3] Chiang Ching-kuo then arrested Sun Li-jen, charging him of conspiring with the American CIA of plotting to overthrow Chiang Kaishek and the Kuomintang. Sun was placed under house arrest in 1955.[4][5]

From December 1943 until the defeat of Nazi Germany, the German armed forces created a network of political instructors to maintain National Socialist indoctrination of the Wehrmacht. The officers, called NS Führungsoffizier (NSFO), drawn from convinced officers and selected by the Nazi Party Chancellor Martin Bormann were to instil ideological conviction and reinforce combat morale through training lessons and teaching. They had no direct influence on combat decisions as had the political commissar in the Soviet Army. At the end of 1944 more than 1,100 full-time and about 47,000 part-time instructors had been trained, under the control of General Hermann Reinecke, commander of the National Socialist leadership staff at the OKW.