From Infogalactic: the planetary knowledge core
Jump to: navigation, search
This article is about the professional body. For others uses of RIBA, see Riba (disambiguation).

The Royal Institute of British Architects (RIBA) is a professional body for architects primarily in the United Kingdom, but also internationally, founded for the advancement of architecture under its charter granted in 1837 and Supplemental Charter granted in 1971.

After the grant of the royal charter it had become known as the Royal Institute of British Architects in London, eventually dropping the reference to London in 1892. In 1934, it moved to its current headquarters on Portland Place, with the building being opened by King George V and Queen Mary.

It was granted its Royal Charter in 1837 under King William IV. Supplemental Charters of 1887, 1909 and 1925 were replaced by a single Charter in 1971, and there have been minor amendments since then.

The original Charter of 1837 set out the purpose of the Royal Institute to be: '… the general advancement of Civil Architecture, and for promoting and facilitating the acquirement of the knowledge of the various arts and sciences connected therewith…'

The operational framework is provided by the Byelaws, which are more frequently updated than the Charter. Any revisions to the Charter or Byelaws require the Privy Council's approval. [2]

The design of the Institute's Mycenean lions medal and the motto ‘Usui civium, decori urbium'[3] has been attributed to Thomas Leverton Donaldson, who had been honorary secretary until 1839.[4] The RIBA Guide to its Archive and History (Angela Mace,1986) records that the first official version of this badge was used as a bookplate for the Institute's library and publications from 1835 to 1891, when it was redesigned by J.H.Metcalfe. It was again redesigned in 1931 by Eric Gill and in 1960 by Joan Hassall. The description in the 1837 by-laws was: "gules, two lions rampant guardant or, supporting a column marked with lines chevron, proper, all standing on a base of the same; a garter surrounding the whole with the inscription Institute of British Architects, anno salutis MDCCCXXXIV; above a mural crown proper, and beneath the motto Usui civium decori urbium ".

Soon after the passing of the 1931 Act, in the book published on the occasion of the Institute's centenary celebration in 1934,[8] Harry Barnes, FRIBA, Chairman of the Registration Committee, mentioned that ARCUK could not be a rival of any architectural association, least of all the RIBA, given the way ARCUK was constituted.[9] Barnes commented that the Act's purpose was not protecting the architectural profession, and that the legitimate interests of the profession were best served by the (then) architectural associations in which some 80 per cent of those practising architecture were to be found.

The RIBA Guide to its Archive and History (1986) has a section on the "Statutory registration of architects" with a bibliography extending from a draft bill of 1887 to one of 1969. The Guide's section on "Education" records the setting up in 1904 of the RIBA Board of Architectural Education, and the system by which any school which applied for recognition, whose syllabus was approved by the Board and whose examinations were conducted by an approved external examiner, and whose standard of attainment was guaranteed by periodical inspections by a "Visiting Board" from the BAE, could be placed on the list of "recognized schools" and its successful students could qualify for exemption from RIBA examinations.

The content of the acts, particularly section 1 (1) of the amending act of 1938, shows the importance which was then attached to giving architects the responsibility of superintending or supervising the building works of local authorities (for housing and other projects), rather than persons professionally qualified only as municipal or other engineers.[10] By the 1970s another issue had emerged affecting education for qualification and registration for practice as an architect, due to the obligation imposed on the United Kingdom and other European governments to comply with European Union Directives concerning mutual recognition of professional qualifications in favour of equal standards across borders, in furtherance of the policy for a single market of the European Union. This led to proposals for reconstituting ARCUK. Eventually, in the 1990s, before proceeding, the government issued a consultation paper "Reform of Architects Registration" (1994).[11] The change of name to "Architects Registration Board" was one of the proposals which was later enacted in the Housing Grants, Construction and Regeneration Act 1996 and reenacted as the Architects Act 1997; another was the abolition of the ARCUK Board of Architectural Education.[12]

RIBA Visiting Boards continue to assess courses for exemption from the RIBA's examinations in architecture. Under arrangements made in 2011 the validation criteria are jointly held by the RIBA and the Architects Registration Board, but unlike the ARB, the RIBA also validates courses outside the UK.[13] 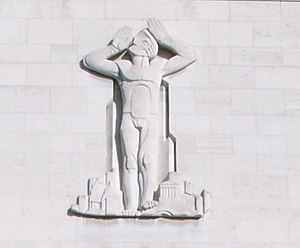 The RIBA is a member organisation, with 44,000 members. Chartered Members are entitled to call themselves chartered architects and to append the post-nominals RIBA after their name; Student Members are not permitted to do so. Formerly, fellowships of the institute were granted, although no longer; those who continue to hold this title instead add FRIBA.

RIBA is based at 66 Portland Place, London—a 1930s Grade II* listed building designed by architect George Grey Wornum with sculptures by Edward Bainbridge Copnall and James Woodford. Parts of the London building are open to the public, including the Library. It has a large architectural bookshop, a café, restaurant and lecture theatres. Rooms are hired out for events.

The Institute also maintains a dozen regional offices around the United Kingdom, it opened its first regional office for the East of England at Cambridge in 1966.

RIBA Enterprises is the commercial arm of RIBA,[20] with a registered office in Newcastle upon Tyne, a base at 15 Bonhill Street in London, and an office in Newark. It employs over 250 staff, approximately 180 of whom are based in Newcastle.

Its services include RIBA Insight,[21] RIBA Appointments,[22] and RIBA Publishing. It publishes the RIBA Product Selector and RIBA Journal. In Newcastle is the NBS, the National Building Specification,[23] which has 130 staff and deals with the building regulations[24] and the Construction Information Service.[25] RIBA Bookshops, which operates online and at 66 Portland Place, is also part of RIBA Enterprises.[26]

The British Architectural Library, sometimes referred to as the RIBA Library, was established in 1834 upon the founding of the institute with donations from members.[27] Now, with over four million items, it is one of the three largest architectural libraries in the world and the largest in Europe. Some items from the collections are on permanent display at the Victoria and Albert Museum (V&A) in the V&A + RIBA Architecture Gallery and included in temporary exhibitions at the RIBA and across Europe and North America.[28] Its collections include:[29]

The overcrowded conditions of the library was one of the reasons why the RIBA moved from 9 Conduit Street to larger premises at 66 Portland Place in 1934. The library remained open throughout World War Two and was able to shelter the archives of Modernist architect Adolf Loos during the war.[30]

The library is based at two public sites: the Reading Room at the RIBA's headquarters, 66 Portland Place, London; and the RIBA Architecture Study Rooms in the Henry Cole Wing of the V&A. The Reading Room, designed by the building's architect George Grey Wornum and his wife Miriam, retains its original 1934 Art Deco interior with open bookshelves, original furniture and double-height central space. The study rooms, opened in 2004, were designed by Wright & Wright.[31] The library is funded entirely by the RIBA but it is open to the public without charge. It operates a free education programme aimed at students, education groups and families, and an information service for RIBA members and the public through the RIBA Information Centre.[32]

Since 2004, through the V&A + RIBA Architecture Partnership, the RIBA and V&A have worked together to promote the understanding and enjoyment of architecture.[33]

In 2004, the two institutions created the Architecture Gallery (Room 128) at the V&A showing artefacts from the collections of both institutions, this was the first permanent gallery devoted to architecture in the UK. The adjacent Architecture Exhibition Space (Room 128a) is used for temporary displays related to architecture. Both spaces were designed by Gareth Hoskins Architects. At the same time the RIBA Library Drawing and Archives Collections moved from 21 Portman Place to new facilities in the Henry Cole Wing at the V&A. Under the Partnership new study rooms were opened where members of the public could view items from the RIBA and V&A architectural collections under the supervision of curatorial staff. These and the nearby education room were designed by Wright & Wright Architects.

RIBA runs many awards including the Stirling Prize for the best new building of the year, the Royal Gold Medal (first awarded in 1848), which honours a distinguished body of work, and the Stephen Lawrence Prize for projects with a construction budget of less than £500,000. The RIBA also awards the President's Medals for student work, which are regarded as the most prestigious awards in architectural education, and the RIBA President's Awards for Research.[34] The RIBA European Award was inaugurated in 2005 for work in the European Union, outside the UK. The RIBA National Award and the RIBA International Award were established in 2007. Since 1966, the RIBA also judges regional awards which are presented locally in the UK regions (East, East Midlands, London, North East, North West, Northern Ireland, Scotland, South/South East, South West/Wessex, Wales, West Midlands and Yorkshire).

RIBA Competitions is the Royal Institute of British Architects' unit dedicated to organising architectural and other design-related competitions.

Architectural design competitions are used by an organisation that plans to build a new building or refurbish an existing building. They can be used for buildings, engineering work, structures, landscape design projects or public realm artworks. A competition typically asks for architects and/or designers to submit a design proposal in response to a given Brief. The winning design will then be selected by an independent jury panel of design professionals and client representatives. The independence of the jury is vital to the fair conduct of a competition.

In addition to the Architects Registration Board, the RIBA provides accreditation to architecture schools in the UK under a course validation procedure.[35] It also provides validation to international courses without input from the ARB.

The RIBA has three parts to the education process: Part I which is generally a three-year first degree, a year-out of at least one year work experience in an architectural practice precedes the Part II which is generally a two-year post graduate diploma or masters. A further year out must be taken before the RIBA Part III professional exams can be taken. Overall it takes a minimum of seven years before an architecture student can seek chartered status.[36]

RIBA in the news 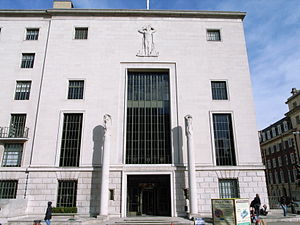 In 2007, RIBA called for minimum space standards in newly built British houses after research was published suggesting that British houses were falling behind other European countries. "The average new home sold to people today is significantly smaller than that built in the 1920s... We're way behind the rest of Europe—even densely populated Holland has better proportioned houses than are being built in the country. So let's see minimum space standards for all new homes," said RIBA president Jack Pringle.[37]

In 2011, a further campaign called Homewise was launched.[38]

The RIBA has been criticised as a London-centric organisation which does not reach out to all members in the United Kingdom and beyond.[39][40]