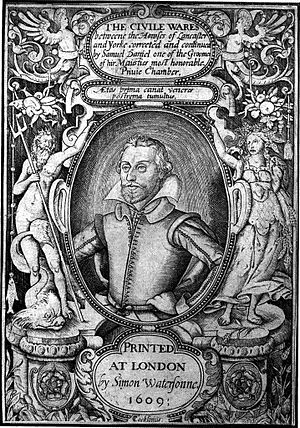 Daniel was born near Taunton in Somerset, the son of a music-master. He was the brother of lutenist and composer John Danyel. Their sister, whose name is unknown, may have married Daniel's friend John Florio. In 1579, Daniel was admitted to Magdalen Hall (now known as Hertford College) at Oxford University, where he remained for about three years and afterwards devoted himself to the study of poetry and philosophy. A "Samuel Daniel" is recorded in 1586 as being the servant of Edward Stafford, the Baron of Stafford and the English ambassador in France. This is probably the same person as the poet.[2]

He was first encouraged and, by his own account, taught in verse, by the Countess of Pembroke, whose honour he was never weary of proclaiming. He had entered her household as tutor to her son, Lord Herbert. His first known work, a translation of Paulus Jovius, to which some original matter is appended, was printed in 1585.[2]

His first known volume of verse is dated 1592; it contains the cycle of sonnets addressed to "Delia" and a romance called The Complaint of Rosamond. Twenty-seven of the sonnets had already been printed at the end of Sir Philip Sidney's Astrophil and Stella without the author's consent. Several editions of Delia appeared in 1592, and they were very frequently reprinted during Daniel's lifetime. Dedicated to "The Right Honourable the Lady Mary Countess of Pembroke", we learn that Delia lived on the banks of the River Avon—not Shakespeare's, but the one which flowed through "where Delia has her seat" at Wilton in Wiltshire—and that the sonnets to her were inspired by her memory when the poet was in Italy. To an edition of Delia and Rosamond, in 1594, was added the tragedy of Cleopatra, written in classical style, in alternately rhyming heroic verse, with choral interludes. The First Four Books of the Civil Wars, a historical poem on the subject of the Wars of the Roses, in ottava rima, appeared in 1595.[2]

As far as is known, it was not until 1599 that there was published a volume entitled Poetical Essays, which contained, besides the "Civil Wars," "Musophilus" and "A letter from Octavia to Marcus Antonius," poems in Daniel's finest and most mature manner. About this time he became tutor to Lady Anne Clifford, daughter of the Margaret Clifford, Countess of Cumberland. On the death of Edmund Spenser, in the same year, Daniel received the somewhat vague office of Poet Laureate, which he seems, however to have shortly resigned in favour of Ben Jonson. At about this time, and at the recommendation of his brother-in-law, Giovanni Florio, he was taken into favour at court and wrote a Panegyricke Congratulatorie in ottava rima[2] which he offered to King James I of England at Burleigh Harrington in Rutland during James' initial progression from Edinburgh to claim the throne in London.

The Panegyricke is included in the presentation folio of 1601, the first folio volume of collected works by a living English poet, but would not have been presented or published until after Queen Elizabeth's death in 1603. Many later editions contained in addition his Poetical Epistles to his patrons and an elegant prose essay called A Defence of Rime. This was not just a defense of rhyme in the formal sense, but of the idea of there being positive post-classical literary developments. As Nicholas Birns puts it, Daniel's defense of rhyme entails "a defense of the medieval, or at least what comes between him and the ancient world.[3] 'He even went so far as seeing Tamburlaine in Christopher Marlowe's play as 'a barbarian to be admired'.[4]

In 1603, Daniel was appointed master of the queen's revels. In this capacity he brought out a series of masques and pastoral tragi-comedies—of which were printed The Vision of the Twelve Goddesses (1604); The Queen's Arcadia, an adaptation of Guarini's Pastor Fido (1606); Tethys' Festival or the Queenes Wake, written on the occasion of Prince Henry's becoming a Knight of the Bath (1610); and Hymen's Triumph, in honour of Lord Roxburghe's marriage (1615).[2] As a dramatist, Daniel maintained a traditional relationship with Court and University, and had little to do with the popular drama that was such a striking development of his culture in his era. As a result, he was largely insulated from the turmoil that sometimes enveloped the popular drama—though not totally: a 1604 performance of his play Philotas led to his being called before the Privy Council. The hero of the play was perceived to resemble Robert Devereux, 2nd Earl of Essex—a troubling connection, given the Earl's 1601 execution for treason.[5]

In 1605, Certain Small Poems appeared, with the tragedy of Philotas. Certaine small Workes heretofore divulged by Samuel Daniel (1607) was a revised version of all his works except Delia and the Civil Wars. In 1609 the Civil Wars had been completed in eight books. In 1612 Daniel published a prose History of England, from the earliest times down to the end of the reign of Edward III. This popular work was continued and published in 1617. The section dealing with William the Conqueror was published in 1692 as being the work of Sir Walter Raleigh.[2]

Daniel was made a gentleman-extraordinary and groom of the chamber to Queen Anne, sinecure offices which did not interfere with his literary career. He was acknowledged as a leading writer of the time. Shakespeare, Selden and Chapman were among the few friends allowed to visit his secluded home in Old Street, St Luke's, where, Fuller tells us, he would "lie hid for some months together, the more retiredly to enjoy the company of the Muses, and then would appear in public to converse with his friends." Late in life Daniel threw up his titular posts at court and retired to a farm called "The Ridge", in the hamlet of Beckington, Somerset, now called Rudge. He died there on 14 October 1619.[2]

Daniel's poetic works are numerous, but were long neglected. This is more surprising since, during the 18th century, when so little Elizabethan literature was read, Daniel retained his prestige. Later, Samuel Taylor Coleridge, Charles Lamb and others praised him. Of his works the sonnets are now, perhaps, most read. They depart from the Italian sonnet form in closing with a couplet, as is the case with most of the sonnets of Henry Howard, Earl of Surrey and Sir Thomas Wyatt, but they have a grace and tenderness all their own. Of a higher order is The Complaint of Rosamond, a soliloquy in which the ghost of the murdered woman appears and bewails her fate in stanzas of exquisite pathos. Among the Epistles to Distinguished Persons will be found some of Daniel's noblest stanzas and most polished verse. The epistle to Lucy, Countess of Bedford, is remarkable among those as being composed in genuine terza rima, till then not used in English. Daniel was particularly fond of a four-lined stanza of solemn alternately rhyming iambics, a form of verse distinctly misplaced in his dramas. These, inspired by the Countess of Pembroke, are less successful than his pastorals; and Hymen's Triumph is considered the best of his dramatic writing. An extract from this masque is given in Lamb's Dramatic Poets, and was highly praised by Coleridge.[2]

Daniel was a great innovator in verse. The 1911 edition of the Encyclopaedia Britannica says of him: "His style is full, easy and stately, without being very animated or splendid; it is content with level flights. As a gnomic writer Daniel approaches Chapman, but is more musical and coherent. He lacks fire and passion, but he has scholarly grace and tender, mournful reverie."[2]

Daniel has been suggested as a possible author of the anonymous play The Maid's Metamorphosis (1600), though no consensus on the argument has been achieved. Daniel's works were edited by A. B. Grosart from 1885 to 1896.[2] Projected scholarly editions of the complete works, including that planned by the Oxford University Press, have not yet been published. A recent edition of his major poetry, with explanatory notes, is Samuel Daniel: Selected Poetry and A Defence of Rhyme (Asheville, NC: Pegasus Press, 1998), by Geoffrey Hiller and Peter Groves.

A reference to Daniel's Sonnets to Delia is made in George Eliot's 19th century novel, Middlemarch, when Mr Causubon is declaring his love for Miss Brooke. "Would it not be rash to conclude that there was no passion behind those sonnets to Delia which strike us as the thin music of a mandolin?"