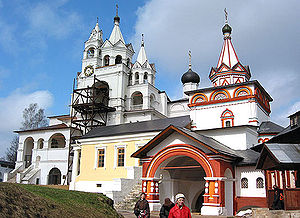 The Savvino-Storozhevsky Monastery (Саввино-Сторожевский монастырь) is a Russian Orthodox monastery in Zvenigorod.

In 1398, Prince Yuri asked St. Savva Storozhevsky, one of the first disciples of Sergii Radonezhsky, to go to Zvenigorod and to establish a monastery on the Storozhi Holm (Watching Hill). St. Savva of Storozhi was interred in the white stone cathedral of the Virgin's Nativity in 1407. This diminutive, roughly hewn church still stands, although its present-day exquisite look is the result of recent restoration. The frescoes in the altar date back to the 1420s, but the rest of the interior was painted in 1656. A magnificent iconostasis in five tiers and the Stroganov School heaven gates were installed in 1652.

In 1650, the monastery was chosen by Tsar Alexis as his suburban residence. In five years, they constructed a white stone royal palace and a festive chamber for the tsaritsa. The cloister was encircled with stone walls and towers, patterned after those of the Troitse-Sergiyeva Lavra. Particularly noteworthy is a large belfry, erected in four bays in 1650 and crowned with three tents and a clocktower. A church over the holy gates was consecrated to the Holy Trinity in 1652.

After the death of Feodor III, who spent most of his time there, the monastery declined. In May 1918, when the Bolsheviks tried to seize the relics of St. Savva, several persons were shot dead. The monastery was ransacked and pillaged, including the tomb of Saint Savva, made of gold plated silver, then the monks were chased out and finally the cathedral was left to ruin. Both cathedrals were entirely covered with frescoes and until the revolution had five-tiered iconostasis. Presently only a few fragments of the original frescoes remain.[1] In 1985, the cloister was assigned to the Danilov Monastery in Moscow. St. Savva's relics were returned to the monastery in 1998.