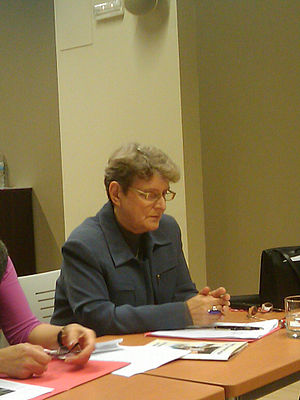 Svetlana Alekseevna Gannushkina (Russian: Светла́на Алексе́евна Га́ннушкина, born 6 March 1942) is a mathematician and human rights activist in Russia who was reported to have been a serious contender for the 2010 Nobel Peace Prize.[1]

Gannushkina worked for many years as a professor of mathematics at a Moscow university. In 1990, she helped to found the group Citizen’s Assistance (Grazhdanskoe Sodeistvie), an NGO which campaigns for human rights, particularly with regard to immigrants and refugees in Russian society.

She is a member of the Council for the Development of Civil Society Institutions and Human Rights under the President of Russia.[2] She is also on the council of Memorial, a society dedicated to the remembrance of victims of Soviet repression.

In 2006, she was awarded the Homo Homini Award for human rights activism by the Czech group People in Need.[3]